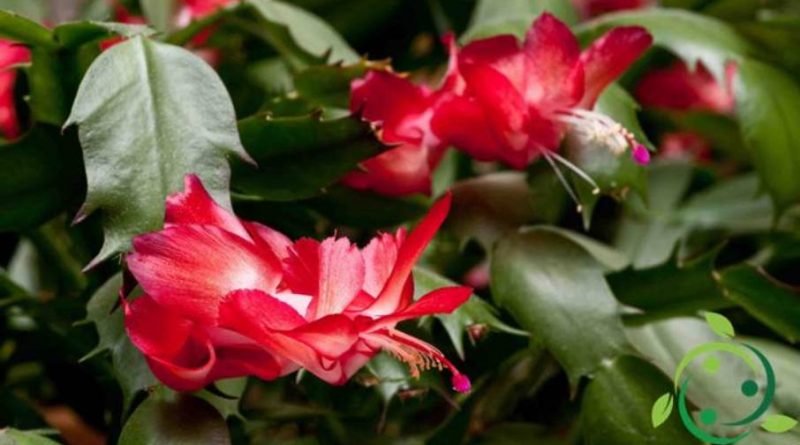 How to grow the Christmas Cactus

Schlumbergera, also known as Christmas Cactus, is a genus of plants belonging to the Cactaceae family, originally from Brazil; belongs to the “epiphytic cactus”; and all its species which are: Schlumbergera bridgesii, Schlumbergera kautskyi, Schlumbergera obtusangula, Schlumbergera opuntioides, Schlumbergera russelianum and Schlumbergera truncata are easy to grow.
The plant is characterized by flat stems with stems that follow each other to form a branch and bloom mainly in spring (except for some subspecies that bloom between autumn and winter) with a very intense and diversified flowering seasonally.
In this sheet we will see how to grow the Christmas Cactus and the main precautions to follow. Let’s say that, in general, it is a plant that must be grown in porous and humid earth with the addition of peat and leaves in equal parts; it must not be exposed to direct sunlight but requires full light and for this reason its maximum bloom reaches it only in the greenhouse, with moderate waterings until the appearance of the buds and more intense at the flowering.
In the period between autumn and winter it must be put to rest at a temperature between 16 and 5 ° C with scarce watering; winter rest that allows the plant to resume in spring with abundant blooms.
Furthermore, the Schlumbergera is multiplied by detaching a flat stem at the joint and rooted in sand and peat; you will then take care to spray only a little water occasionally to prevent water from settling and consequently the sprouts will rot.
However, let’s see in detail the various practices.

– Substrate: The Christmas Cactus requires a well draining soil, composed of a mixture of normal soil and fine bark. You can also use sand or small stones in the base of the vase to help with drainage. For the nutritive elements, the plant fertilized every two weeks with a diluted liquid fertilizer; to enter the plant in dormancy, one month before the winter flowering (which coincides with the end of October) it is necessary to interrupt the fertilization.
– Watering: the plant loves the moist soil but without causing abundance and stagnation; between one watering and the other wait for the soil to dry on the surface and then water again.
– Lighting: The Christmas Cactus, even if it grows with poor lighting, loves a very bright environment but without direct sunlight that can burn the leaves of the plant, so you should choose a location of the house facing east or north.
– Temperature and humidity: Schlumbergera grows optimally with temperatures around 18 and 23 degrees, which is the average temperature of most homes and with humidity of 50-60%, a condition that may be favored by the presence of humidifiers at home.
– Repotting and pruning: Schlumbergera, unlike other plants, prefers in just enough pots; this because with the lack of space for the root system the best blooms will be obtained. In any case, for repotting (not before two or three years) never proceed while it is in bloom. Repotting should be done either in spring or early summer, which allows the plant to stabilize. As for pruning, these should be done about a month after the end of flowering, which will allow the Christmas Cactus to resume growth after a short rest period. For pruning, simply rotate the stem between the segments on the stem and remove the section; in general, it is possible to remove up to 1/3 of the plant every year without causing any vegetative disturbances.
– Finally the secrets for a good flowering: as already mentioned in the premises, to encourage abundant flowering it is advisable to make the plant sleep in a period that is equivalent to the end of October; in this period the temperature must be between 10 and 13 degrees every night from the end of October for a period of six to eight weeks before Christmas. In the same period the plant must be in total darkness for 12-14 hours each night.