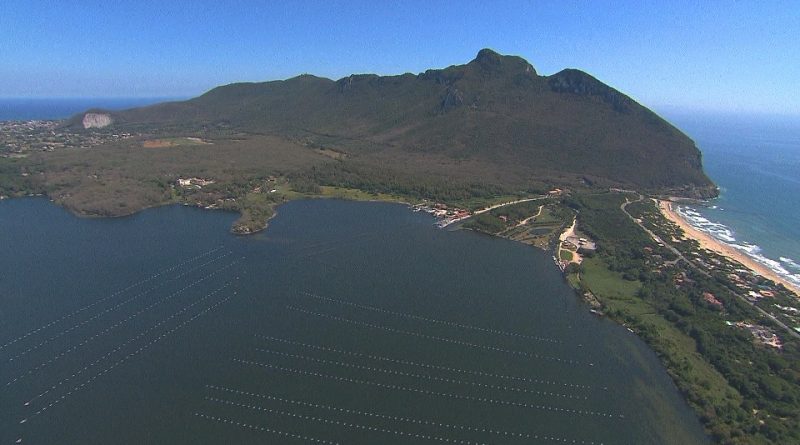 The Circeo National Park was established in 1934 and was created to protect a rich set of characteristic biomes with a consequent extreme wealth of its biodiversity.
In fact, the Circeo National Park is one of the oldest protected natural areas in Italy. It is located along the Tyrrhenian coast of historic Lazio and extends along the stretch of coastline between Anzio and Terracina, with an area of ​​5,616 ha takes its name from the homonymous promontory.
It is a park that extends completely in the plains and in a marine environment and is also a UNESCO “biosphere reserve” since 1997.
The Circeo National Park takes its name from the mountainous top of Mount Circeo which reaches 541 m. that from the geological point of view is a calcareous-dolomitic massif of the Mesozoic formed by sedimentation in an undefined area of ​​the current Tyrrhenian and then last on layers of flysch, for about 200 kilometers, up to occupy the current position.
According to the ancient legend, Circeo lived on the Circeo who, after trying to turn Ulysses and his companions into pigs, as told in the Odyssey, welcomed them for a year and gave them valuable information. The promontory, from the naturalistic point of view, is divided into two completely different sides.
– The north side: also called “Quarto freddo”, characterized by a humid climate, is covered by a thick, high holm oak, associated, at lower altitudes, with the lesser ash, the black hornbeam, the downy oak and the farno. In the undergrowth are erica, broom and strawberry tree while, towards the lowland forest, in the area of ​​”Mezzomonte”, there is a cork of about 25 ha.
– The southern side: called “Quarto caldo”, which faces south and therefore enjoys a sunny exposition throughout the year. On this side we find a Mediterranean rock vegetation with holm oak, Phoenician juniper, arboreal euphorbia, myrtle, lentisk, rosemary, heather; among the low bushes we find instead the marine fennel, the helichrysum, the euphorbia, the statice and Circe’s centaurea. Among the most important species we find the dwarf palm, the only spontaneous palm in Europe, a relic of the hottest eras.
As for the fauna, we find, in addition to the wild boar, the badger, the marten and the moscardino; among the birds there are birds of prey such as the peregrine falcon, the kestrel and the many others that nest or fly over the area during the migrations. 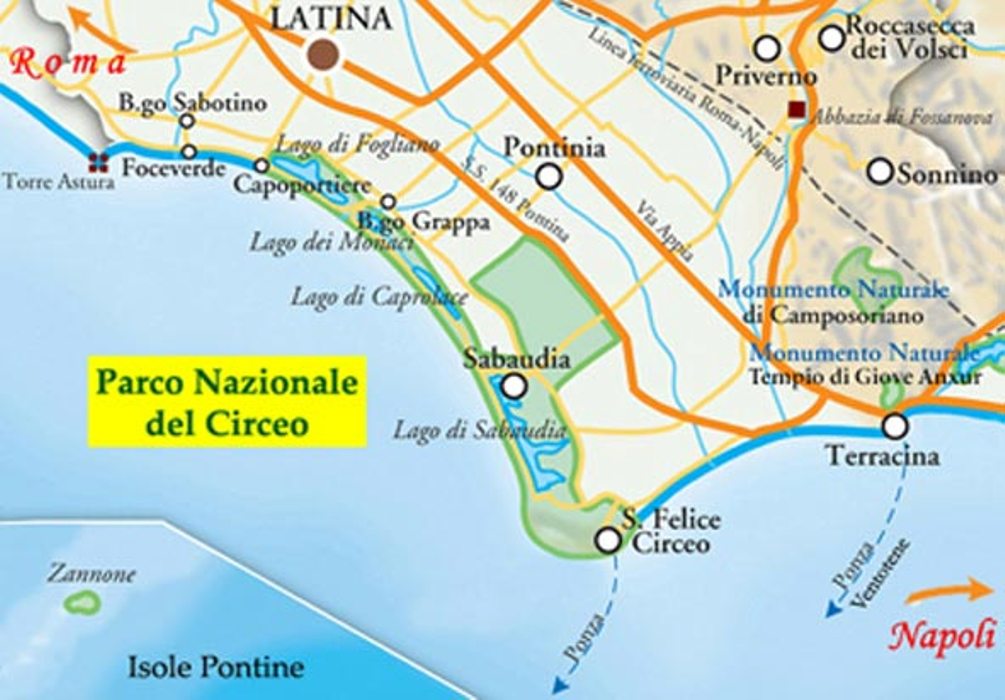 The Circeo promontory has a remarkable speleological interest for its numerous caves that have kept track of climatic variations and sea level oscillations in past geological eras, in addition there are testimonies of an ancient human occupation from the Paleolithic age with the finding of a Neanderthalian skull.
There is also what remains of the old “Selva di Terracina”, covered with Mediterranean vegetation and trees typical of marine areas, such as pines, holm oaks and cork oaks. The forest, today, is still a vast ecosystem; characteristics, for example, are the “pools”, ie marsh areas that are formed mainly in the autumn season due to the accumulation of rainwater, and the “lestre”, areas in which, once, the seasonal inhabitants built their precarious villages . In the forest there are three areas of Integral Nature Reserve: the Pool of the Baths, the Piscina della Gattuccia and the Lestra della Coscia. In the undergrowth of this forest we find berries and small fruits, such as hawthorn, blackthorn, apple tree and wild pear, strawberry tree, tree heather, butcher’s broom etc .. in it is also rich faunistic representation; there are: mammals typical of the Mediterranean area, such as wild boar, hare, badger, hedgehog, fox, weasel, etc ..; reptiles: snake, natrice, viper, land and marsh tortoise; amphibians: newt, frog, frog. The coastal strip of Circeo is also important from an ecological point of view; in it we find several species of small plants, such as shrubs and bushes, which offer an ideal habitat for many animal species including badgers, foxes, rabbits, lizards, beetles. In the fall it is possible to observe the so-called “barchette di San Pietro”, jellyfish similar to small sailboats, which make the beach bluish. The flora is represented by: sea lily, sandgrass of the sands, camomile maritime, carpobroto, witch’s nail, etc., small plants that are the first outpost of protection for the whole ecosystem upstream of the dunes.

In fact, proceeding from the sea inward we find, start to grow species such as the juniper and the lentisk and in succession, where the soil becomes more fertile, the maritime pine and the holm oak, which are however replaced, on the banks of lakes, from alders, ash trees, poplars and willows.
The four lakes, connected to the sea, by Paola, Caprolace, Monaci and Fogliano, small brackish water basins and ideal shelter for many species of water birds, are important in the coastal ecosystem. In these particular ecosystems we find the marsh tortoise, species at risk of extinction in Italy, as well as a series of fish considered important indicators of the quality of the environment. Other animals that we can easily find traces are the badger and the porcupine, as well as fox, weasel, wild boar and hedgehog. The banks of the lakes host, from the point of view of the flora, a vegetation composed mainly of salicornie, classrooms and tamarisks. There are numerous birds, which can easily be observed in the Pantani area of ​​the Inferno, in front of the lake of Caprolace: here, the presence of the brackish waters of the lake and the sweet waters of the marshes, favors the stop of different species.
Due to the importance of these ecosystems and wetlands connected in 1976 these were declared “Wetlands of International Interest”.
Inside the Circeo National Park we remember the island of Zannone which is the most northerly of the Ponziane Islands, and by extension (0.9 km²) the third third of the archipelago (smaller ones are Santo Stefano and Gavi). It is located north-east of Ponza, in the Tyrrhenian Sea. It is fully included in the Circeo National Park, which has guaranteed its protection since the first half of the twentieth century. In it, an important ecosystem consists of: the helichrysum near the coast which, rising, is replaced by mastic, myrtle and heather; higher up the broom, the phyllirea, the arboreal euphorbia which gradually give way to the strawberry tree and the holm oak; in the north, instead, we find holm oak woods, with heathers and laurels. Among the wild animals, there is the mouflon, introduced on the island in the twenties of the twentieth century and now protected species.
Finally, we must include some state nature reserves within the territory of the Circeo National Park; these are: Natural Reserve of Circe, Natural Reserve Swimming Pool of the Baths, Nature Reserve Piscina della Gattuccia, Pantani dell’Inferno Natural Reserve, Lestra della Coscia Nature Reserve and the Circeo State Forest Natural Reserve.