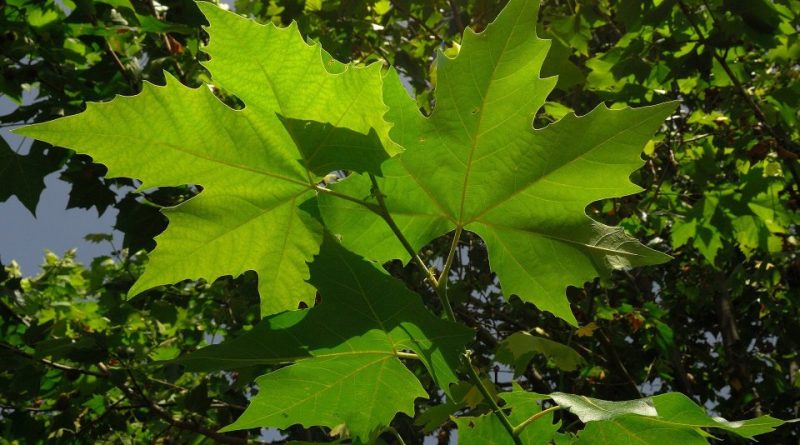 The common Plane or Platanus hybrid (Platanus acerifolia (Aiton) Willd.) Is an arboreal species of the Platanaceae family.

Etymology –
The term Platanus comes from the Greek πλάτανος plátanos platano orientale, derived from πλατύς platýs broad, broad, due to its wide foliage or large leaves. the specific epithet acerifolia derives from the genus Acer (Latin name of the maple mentioned in Pliny and Ovid which could derive from pointed, pungent acer acris, for the pointed lobes of the leaves or for the use of maple to make lances) and from folium leaf: with leaves similar to those of a maple.

Geographic Distribution and Habitat –
Platanus acerifolia is considered a hybrid between Platanus orientalis and Platanus occidentalis; not yet having many stabilized characters it becomes difficult to precisely define its genesis and origin. It is said that the hybridization took place in Spain, but it could also have occurred in the Vauxhall Gardens in London, where John Tradescant, the young man, discovered the tree in the mid-seventeenth century and precisely in 1663 and before 1670 was cultivated botanical garden in Oxford. 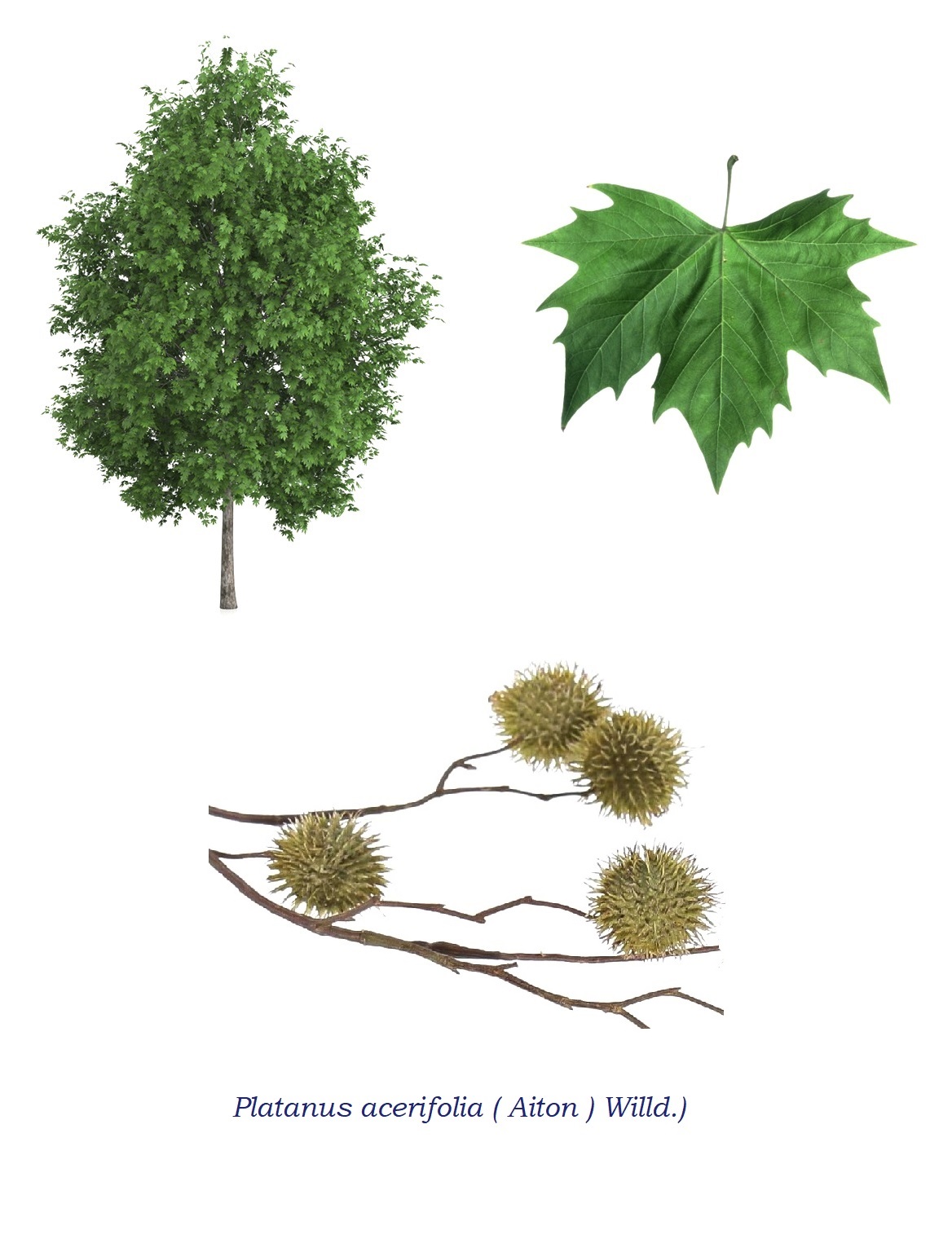 Description –
The common Plane tree is an imposing tree that can reach 30 meters in height and in some cases even reach 40 m; It has a wide crown that remains up to the ground in isolated specimens. It has a straight, cylindrical stem with a bark peeling into asymmetric plates, leaving visible the underlying layers of gray – greenish color. It has a sympathetic branching (the apical bud abscinde) and the divergent buds are contained in the petioles of the petiole fused together. The branches of the year are hairless. The leaves have large and long petiolate lamina, similar to those of the oriental plane tree with five or seven acute and toothed lobes and small stipulations. If they have more characteristics of the Western plane tree they have three (five) obscure lobes and large stipulations. The plant blooms in the period between April and May and the flowers are gathered in yellow and red racemes and the pollination is anemophilous. The fruits, spherical, are carried on very long peduncles and gathered in racemes. These ripen in the autumn period and disintegrate in winter; the achenes are transported far from the plant by the wind (anemocoria) thanks to the tufts that support them.

Cultivation –
The common plantain is a plant that grows, without any problem, in any soil, preferring however the well drained and deep, not calcareous substrates; in fact, given the great height that it can reach, it needs to develop a good root system that supports it and the well-drained soil allows to avoid the formation of water stagnations, which are harmful to the health of the plant. the plant prefers sunny exposures, even if they develop without problems in any condition; they grow even in complete shade. It is also a plant resistant to cold.
Due to their location, their size is taken into account, so they require large places and allow them to develop better.
As for water supplies, usually the plant is satisfied with the rains, even if it is good to water the very young specimens in the hottest and driest months of the year, to make sure that they can develop properly.
For the multiplication it is possible to practice cuttings in autumn, while in spring it is possible to propagate the common plane-tree by seed. It is however possible to take also the basal suckers that develop in large numbers; for the first few years small seedlings are often subject to numerous diseases, so it is good to spray them with broad-spectrum fungicides to avoid their onset.
The common plantain is a plant very resistant to pollution, supports pruning, even severe and repeated.

Uses and Traditions –
Platanus acerifolia, also known as London Plane, is also often known by the synonym Platanus × hispanica.
It is thought that the species was formed by hybridization in the seventeenth century after P. orientalis and P. occidentalis had been planted close to each other. It is often said that the hybridization took place in Spain, but it could also have happened in the Vauxhall Gardens in London.
This species has intermediate characteristics between the two parental species and the hybrid is fertile.
The common or hybrid plantain is a very rustic plant and resists well to pruning, so it has replaced the other plane trees for ornamental purposes. It is also used in joinery for turned objects, furniture and common objects.

Preparation Mode –
In addition to the ornamental purposes and use of timber, the common Plane has no other particular uses, supported by sufficient literature.