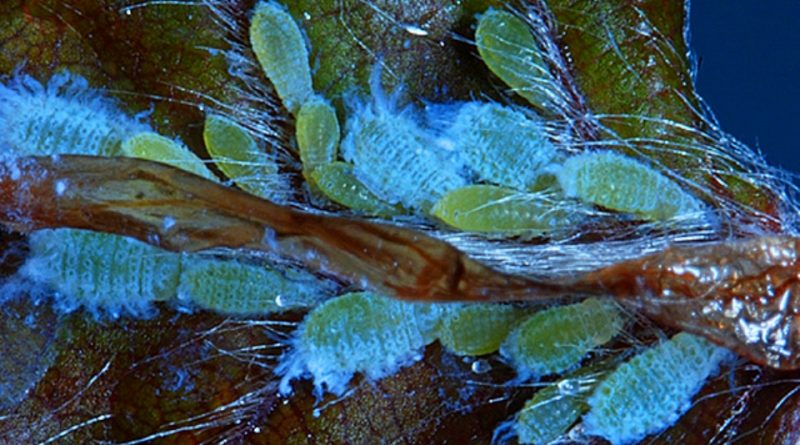 Geographic Distribution and Habitat –
A fluffy aphid of the beech is a small aphid that lives in the areas where the Beech grows; it has been found on four species of Fagus: Fagus crenata, Fagus grandifolia, Fagus orientalis and Fagus sylvatica.

Morphology –
Phyllaphis fagi is a small aphid of 2-3 mm in length, of a greenish color; it lives in colonies, above all in the lower leaf page, along the main rib and on the petiole of the foliages of the beech.
The founders: virginopare attere, are 2 to 3.2 mm long, of a bright yellow or green color, with brown or dark green spots on their backs, they are entirely covered with white or bluish cirpary filaments.
The fondatrigenie attere: virginopares entirely similar to the founders, have however the forms of midsummer of reduced dimensions, their length does not exceed 1 mm.
The winged fondatrigenie: virginoparous, of color between the yellowish green and the green, also intense with dark head and black thoracic lobes, of the same color are the bands and the spots distributed on the back of each abdominal segment, the wings are transparent. The whole body is covered with white or bluish waxy threads. This shape is long from 2 to 2.8 mm.
Finally, the anfigonici: the females, they will be long between 1.5 and 1.8 mm, completely yellow or yellowish orange or dark reddish or bright green; on the head, on the thorax and on the median area of ​​the abdominal segments, black areas are distinguished; the length varies from 2 to 2.8 mm. The winged males have a livery with black head and thoracic lobes and bright green abdomen with black median areas and black spots on the back; the air length between 1.4 and 1.8 mm.
The presence of the colonies is very evident as they are covered with a typical and showy waxy, white secretion, with a wooly appearance that covers above all the infested leaf page.

Attitude and biological cycle –
Phyllaphis fagi is a monoic aphid that starts its activity at the vegetative restart, in the period of late April-May, with a spike of infestation at the end of spring, in the period between May and June. It generally performs a varied number of generations and winters at the egg stage.
The founders, who were born between late April and early May by the enduring eggs placed in the branches of the crown of adult beech trees, migrate to the young plants, preferring those bushy and the suckers where they colonize, in preference, the leaves. On these occupy the lower page remaining, in general, close to the ribs.
The first generation of fondatrigenie consists of swollen and winged forms; the latter constitute the population of the second generation which, in the summer, is reported on the tops of mature beeches. Subsequently, the sessupare, which appear in the period of September, produce the anophigonici parthenogenetically. At the end of October you will have the durable eggs that the females place, in number of 10 or 16 for each, on the gems or inside the chapings of the branches.

Ecological role –
Phyllaphis fagi is an aphid that, living on the leaves and buds of various species of beech, creates a series of diseases with consequent aesthetic and economic damage. The leaves, but especially the struck buds, are atrophied in a characteristic way: in the leaves the leaf blade spreads out in an irregular way and curls up towards the inferior page; in the shoots the crumple is downward. In addition this Afide produces an abundant quantity of honeydew that smears the leaves and, in particular, the young shoots; these are the most infested, with consequent aesthetic damage.
As mentioned, the damage is mainly of an aesthetic type, due to the abundant honeydew that smears the vegetation, to the discomfort that it brings to the furnishings of the under-tree, gardens and parks, and to the defoliation that causes the affected trees in the foliage. The affected plants are defoliated at the tip and highlight a stunted vegetation. In young plants in nurseries these damages can take on such importance as to ruin the symmetry of the hair and to compromise the development of the future plant.
The damage is also caused on the suckers and bushes with twigs and lower page of the leaves with bows of wax, honeydew and fumiggine that can eventually dry out.
To date, the fight against this aphid has been chemical, mainly performed in nurseries, at the appearance of the first infestations, before the massive production of honeydew and wax secretions that protect the phythage. Products based on specific aficits are used. In a period that must go from late spring up to the appearance of sessupare, with a maximum in June. The rehabilitation must however also evaluate the presence of the entomofauna useful in order to interfere the minimum possible with useful insects: hoverflies, ladybugs and pollinators.