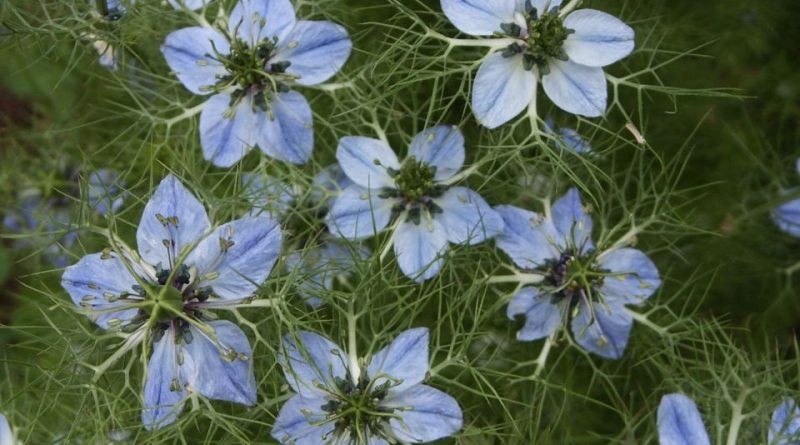 Systematic –
From the systematic point of view it belongs to the Eukaryota Domain, Kingdom Plantae, Magnoliophyta Division, Magnoliopsida Class, Order Ranunculales, Family Ranunculaceae and therefore to the Genus Nigella and to the Specie N. sativa.

Etymology –
The term Nigella is the diminutive of black nígra: black. The specific sativa epithet comes from satum (past participle of sero sowing, planting) sown, planted: which is sown or planted, cultivated, domestic.

Geographic Distribution and Habitat –
The Black Cumin is a plant native to South-West Asia where it is known and used from remote eras but not to be confused with the Bunium persicum, which is also called black cumin. However, the plant grows above all in Turkey and the East. 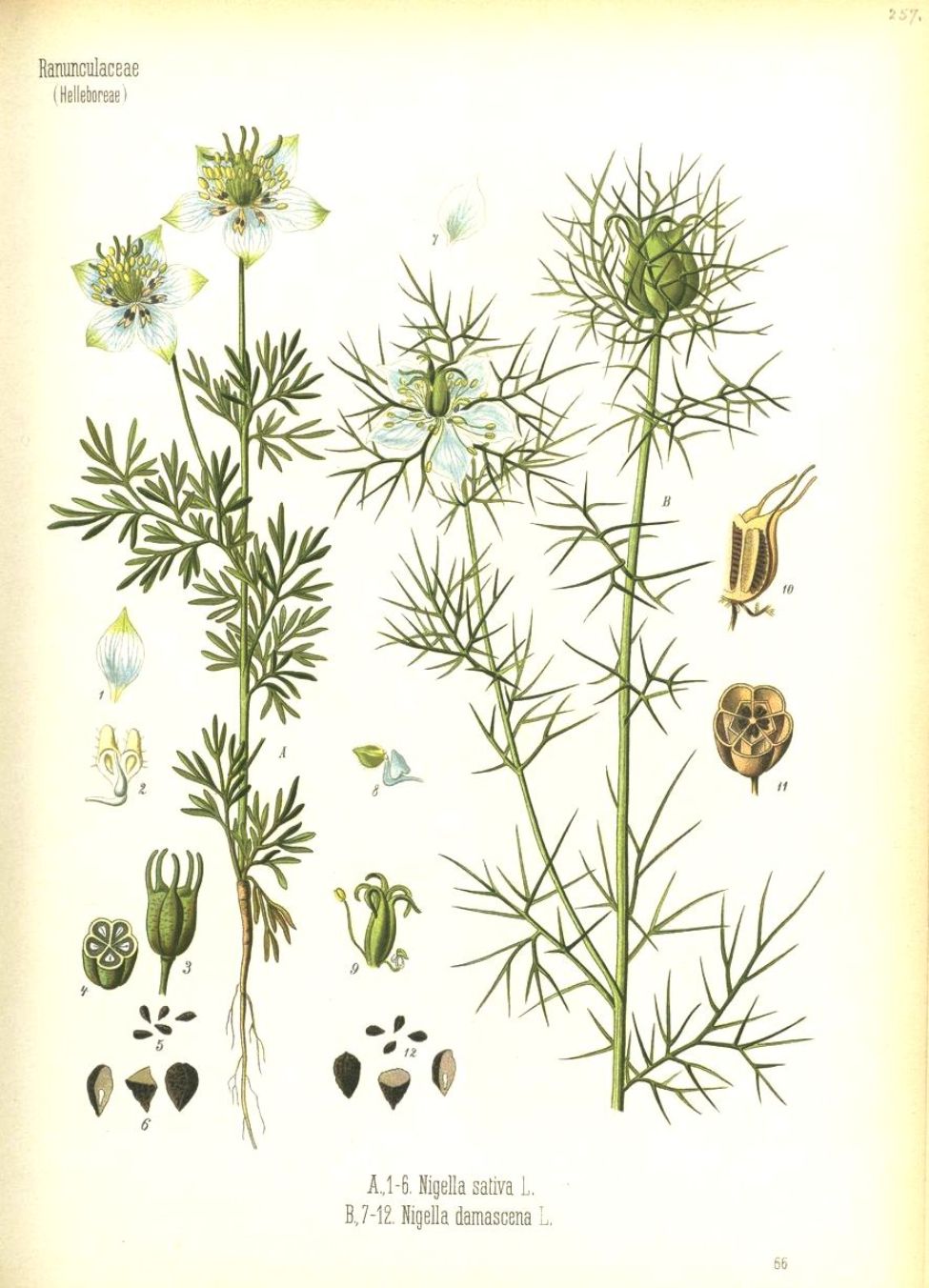 Description –
Nigella sativa is a herbaceous essence that can grow up to 20-30 centimeters in height. The plant has branched and linear leaves. The flowers, which develop in summer, are of a color between white and pale blue, of delicate consistency and made up of 5-10 petals. The fruits are rather large and swollen capsules made up of 3-7 follicles, which contain numerous seeds.

Cultivation –
The Nigella sativa is a very easy plant to grow also in pot using fertile soil, drained and ensuring a sunny exposure and mild climate. The sowing (5 cm of depth by spacing the seeds of 10 cm between them) is carried out in the period from February (in seedbeds) to April (in dwelling); after about three weeks, the first seedlings will be sprouted, which should be gently irrigated, especially during periods of drought or very windy. Bears, however, short period of drought, but not water stagnation. Very delicate instead in transplants because the roots are very fragile. For its use it is necessary to let the flowers wither and produce the edible seeds; at this point you have to cut the plants at the base and hang them in a dry and ventilated place inside paper bags so that the pods can continue to ripen and the small seeds fall naturally without being lost. You have to let them dry for a week and keep them in airtight containers. The seeds, white or gray, after drying in the sun will become black. For details of the cultivation technique refer to the following sheet.

Uses and Traditions –
Nigella sativa, more commonly known for some time as black cumin or even as “the Benedict seed”, has been considered for thousands of years and by a large portion of the world population, one of the most precious phytotherapeutic herbs of all time. This plant is used to reduce the risk of contracting diseases and to counteract existing ones, acting as a reinforcer of the immune system, as more and more scientific studies show that many diseases are induced by an imbalance (or dysfunction) of the immune system.
Muhammad said that “he can heal everything but death” and this does not seem an exaggeration in light of the effects of Nigella on the immune system. In fact, as such, it was known by the ancient Romans under the name “Roman coriander”.
The nigella sativa was known and appreciated by the ancient Egyptians; His seeds were found in several archaeological sites in Egypt (in the tomb of the Pharaoh Tutankhamon there were amphorae filled with nigella oil). Although its exact role in Egyptian culture is unknown to us, these findings tell us that the seeds and oil of the plant were carefully selected to accompany the pharaoh after his life and, therefore, had to play an important role in that civilization.
The first paper with reference to Nigella sativa is found in the Old Testament and, precisely, in the Book of Isaiah, where Isaiah opposes the cultivation of Nigella and Cumin (typical Egyptian crops), exalting in its place the cultivation of wheat (Isaiah 28: 25, 27).
Later, in medieval times, the properties of the nigella were studied by Arab-Islamic researchers, particularly by the al-Biruni scientist and by the philosopher and physiologist Avicenna (Ibn Sina), who, in his “Canon of Medicine”, claims that the seeds of black wheat (N. sativa) have the property of stimulating body energy and are natural restorative.
The black cumin in fact contributes to a natural detoxification of the organism and does not present particular known contraindications and risks of side effects, if used correctly, except for the assumption during pregnancy due to its possible abortive effects in how it stimulates the contractions of the uterus ; it is also not recommended during breastfeeding for the taste that could be transmitted to breast milk (although it increases its production).
In Ayurvedic medicine the seeds of Nigella sativa are used to treat asthma, thanks to the antihistamine and vasoregulatory action.
In Indian medicine the seeds of Nigella sativa are used as antiasthmatic. The plant shows a dual activity: antihistamine and vasoregulator. The infusion was used against meteorism, in catarrhal affections, to promote menstrual flow and dysmenorrhea. Furthermore, diuretic action helps to limit premenstrual water retention. It seems to be a strong antiparasitic against intestinal parasites.
Recent clinical studies examined in a systematic review (Phytotherapy Research 2003) seem to demonstrate the activity of Nigella sativa oil in various allergic conditions such as rhinitis, asthma, atopic eczema.

Preparation Mode –
Nigella sativa can be used in various ways, both in the kitchen and for therapeutic use.
The seed is used as a spice. It has a bitter and pungent taste with a faint strawberry smell. It is mainly used for the preparation of liqueurs, sweets and sweets in general. In the Middle-Eastern cuisine finds a place in the recipes of typical sweets and traditional biscuits; it is also often used to flavor and cover particular types of bread (the naan bread variety called Peshawari naan), or as a decoration in salads. Nigella oil is used in the United States as a dietary supplement and can also be safely eaten on bread. It is also the main ingredient of a cola-flavored drink.
In therapeutic use the infusion of the plant is used against meteorism, phlegm, to promote menstrual flow, fight dysmenorrhea (menstrual pain) and premenstrual water retention (diuretic action). Also useful against intestinal parasites. Its oil lends itself to successfully treat dermatitis, burns and eczema.