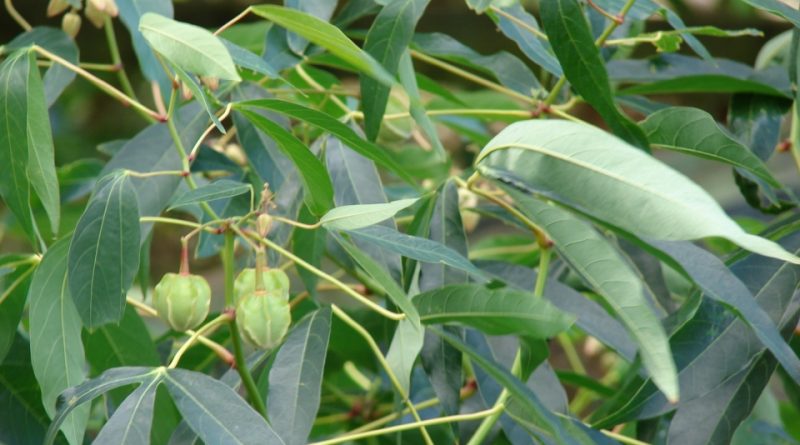 Cassava or yuca (Manihot esculenta Crantz) is a shrub species belonging to the Euphorbiaceae family.

Systematic –
From the systematic point of view it belongs to the Eukaryota Domain, Kingdom Plantae, Magnoliophyta Division, Magnoliopsida Class, Euphorbiales Order, Euphorbiaceae Family and therefore to the Manihot Genus and to the Specie M. esculenta.

Geographic Distribution and Habitat –
Manihot esculenta is a species native to central-southern America. The species is cultivated in most of the tropical and subtropical regions of the world. The wild populations of the Manioca (subspecies flabellifolia) progenitor of the cultivated one, are native to central-western Brazil, where they had already been cultivated for about 10,000 years BC. 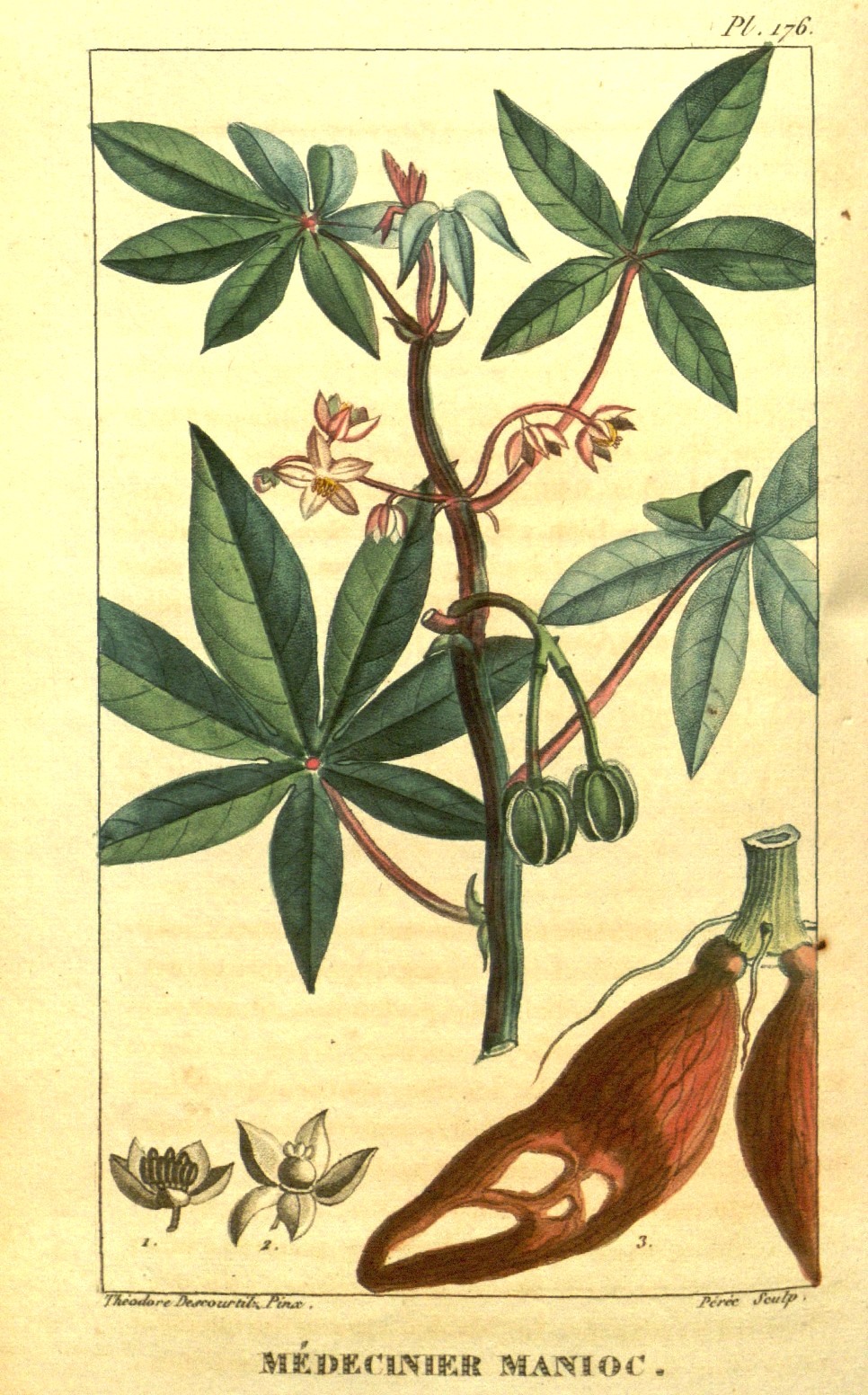 Description –
The Manioc is a bushy perennial shrub that develops underground tubers long and thinned at one end, like a carrot, which contain a hard pulp, white or yellowish, enclosed in a few millimeters thick rind, rough and brown; rquesti represent storage organs. In the cassava varieties grown for commercialization they can be up to 80 cm long, with a diameter of about 5 cm. A wood cord runs along the axis of the tuber. The plant, in tropical regions can grow up to 3 meters in height. The large leaves are divided and appear as green hands with numerous fingers. The female and male flowers grow on the same shrub, forming clusters of about 200 male and 20 female flowers, which flower for about five days. The feminine flowers hatch before the masculine ones. The flowers develop rounded seed capsules which open up as soon as they are ripe and scatter the seeds.

Cultivation –
Cassava is widely cultivated in the tropical and subtropical countries of the world and is harvested by hand, lifting the lower part of the stem and pulling to extract the root from the ground. The plants are sown by planting the stem cut into the soil. For details of the cultivation technique refer to the following sheet.

Uses and Traditions –
The cassava root is the third and most important source of carbohydrates in the world’s human food in tropical countries, together with the yam and the bread tree, and is one of the main sources of food for many African populations and has become a important food in Asia, where it is grown extensively in Indonesia, Thailand and Vietnam.
The tuberized root is edible, very rich in starch and is prepared and cooked in many ways; among other things, it produces a starch known as tapioca. Today all the modern varieties of M. esculenta are produced from artificial selection by man, starting from natural varieties.
The presence of this plant in the food traditions and agriculture of the peoples of central and southern America is lost in the mists of time. Around 4600 B.C., the pollens of the plant were found in the plains of the Gulf of Mexico, in the archaeological site of San Andrés. The earliest evidence of cultivated manioc comes from the archaeological site of the 1400-year-old Maya civilization of Joya de Cerén in El Salvador.
Cassava was a staple food of pre-Columbian civilizations in the Americas and is often represented in pre-Columbian indigenous arts. The Moche often painted the plant in their ceramics.
With the invasion of the Spaniards the cassava does not meet a good favor. They much preferred Spanish food, especially white bread, olive oil, red wine and meat, and considered the cassava to be harmful to Europeans. Furthermore, for the Christians of the New World, manioc flour was not suitable for communion because it could not be used for communion and thus become the Body of Christ.
Cassava was introduced to Brazil from Brazil by Portuguese merchants in the 16th century. In the same period it was introduced in Asia with the Colombian exchange by Portuguese and Spanish merchants, planted in the colonies of Goa, Malacca, Eastern Indonesia, Timor and the Philippines.
Today the cassava comes in a variety of preparations, uses and traditional dishes linked to the food and culinary characteristics of many countries of Asia, Central and South America and Africa.
Cassava also has applications in the traditional medicine of some of the countries in which it is grown. The roots of bitter variants are used to treat diarrhea and malaria; the leaves can be used as analgesics and to reduce hypertension. Cubans use cassava to treat symptoms of irritable bowel syndrome. In other countries such as Thailand, China, Nigeria and Brazil, cassava tubers and stems are used as fodder for farm animals; it is a product with a high content of proteins (20 ÷ 27%) and condensed tannins (1.5 ÷ 4%) and is considered a good source of bran for ruminants.
In the Central African Republic the cassava is also used to create a kind of paint used to whitewash the outer walls of the buildings. Cassava is also an ingredient of many starches to starch during ironing, commercially available.

Furthermore, in several countries, research projects have been launched to evaluate the possible uses of cassava for the production of biofuels.
The roots, peelings and leaves of cassava can not be eaten raw because they contain cyanogenic glycosides, linamarin and lotaustraline. These are decomposed by linamarase, an enzyme that releases hydrogen cyanide (HCN). In this sense the manioc varieties are often classified as “sweet” or “bitter”, if they are free or containing cyanogenic glycosis. The cultivars of the so-called “sweets” (actually not loving) can produce something like 20 milligrams of cyanide (CN) per kilogram of fresh roots, while the “bitter” ones can produce more than 50 times as much (1 g / kg).
A dose of 25 mg of pure cassava cyanogenic glucoside, which contains 2.5 mg of cyanide is sufficient to kill a mouse. It is known that an excess of cyanide residue from an improper cassava preparation causes an acute cyanide intoxication, and goiter, and has been associated with ataxia (a neurological disorder affecting walking ability, also known as konzo) .
During the famine in Venezuela at the end of the year 2010, dozens of deaths occurred due to the recourse of Venezuelans to food consisting of cassava “bitter” to make up for the famine.
For some small roots of the “sweet” varieties, cooking is sufficient to eliminate toxicity. Cyanide is removed in water preparation and the quantities produced as a result of domestic consumption are too small to have an environmental impact. The big roots of the “bitter” varieties used to produce flour or starch must undergo a cyanide removal process.

Preparation Mode –
The cassava root can be cooked, as mentioned, in a great variety of ways, linked to the food traditions of the Peas where it is grown. These systems are very similar to those used for potatoes. You can eat it boiled, possibly crushed in the form of mashed potatoes; after boiling or steaming it can be sliced ​​into small pieces and fried like chips or roasted like baked potatoes.
The cassava can also be crushed to obtain a starch or flour tasteless known as tapioca (gluten-free) similar to the sago, which may have different uses; it can be used to create a cake similar to rice pudding, or to make food similar to bread and other wheat flour derivatives. For this reason, tapioca (or manioc flour) appears among the ingredients of many diet products designed for people with celiac disease or other forms of gluten intolerance. In addition from the pulp of the cassava root, crushed and fermented, alcoholic beverages can also be obtained.