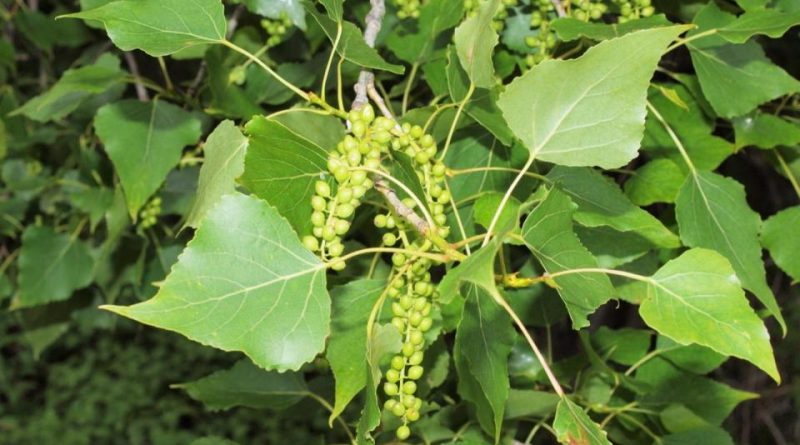 The Black Poplar (Populus nigra L., 1753) is an arboreal species belonging to the Salicaceae family.

Systematic –
From the systematic point of view it belongs to the Eukaryota Domain, Kingdom Plantae, Magnoliophyta Division, Magnoliopsida Class, Order Salicales, Family Salicaceae and therefore to the genus Populus and to the species P. nigra.

Etymology –
The term Populus comes from the Greek πάλλω pállo to jump, shake, tremble: for the behavior of the leaves under the action of the wind. The specific epigraphic nigra is a Latin derivation term meaning black, due to the color of the trunk and branches.

Geographic Distribution and Habitat –
The Black Poplar is a species native to Europe, North Africa and western Asia. In Italy this plant is widespread in the plains and in the hills especially in the north and in the center. Its habitat is often represented by the banks of waterways. 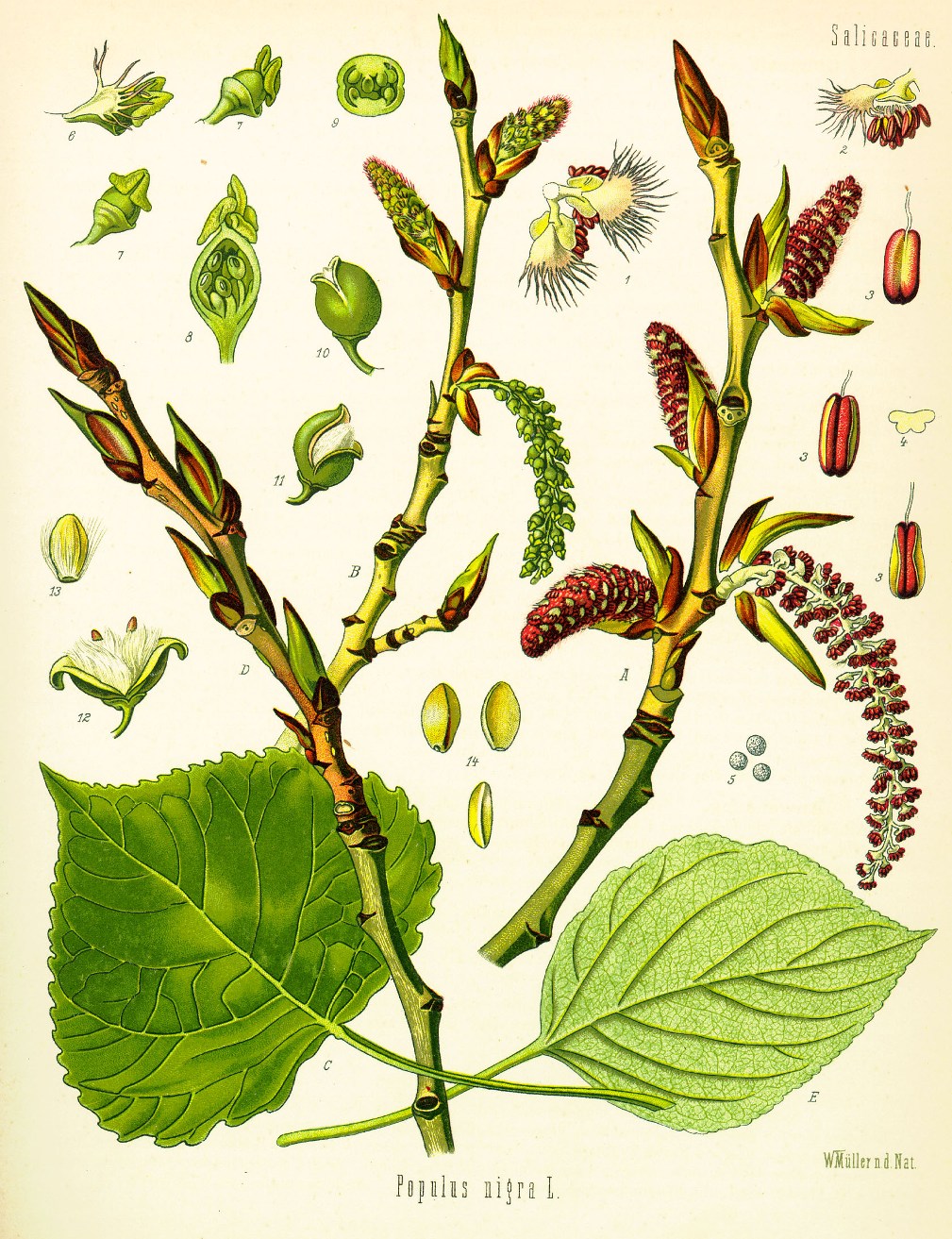 Description –
The Populus nigra is a tree that can reach 30 meters in height with narrow ovoid or narrow crown depending also on the variety. The trunk is straight, with thick bark, of a dark gray color, furrowed vertically. The leaves are deciduous, simple, triangular-rhomboid and with long petiole and serrated margin.
It is a dioecious plant, with male inflorescences gathered in 5-9 cm catkins, reddish in color and female inflorescences gathered in slender catkins also 12 cm long in yellow-green color. It blooms in March, April. The fruits are ovoid capsules which when ripe rip free of the feathery seeds.

Cultivation –
The black poplar is a plant that prefers very bright, sunny, but that fits well even in partial shade while it does not like the complete shade. The plant is resistant to cold and wind, is very resistant to pollution and is therefore very used for road trees but is also found spontaneously along the banks of ditches or in alluvial areas.
From the pedological point of view the populus nigra trees prefer soils rich in organic matter, light and well drained, they are difficult to adapt to inconsistent and sterile soils; in nature they prefer wetlands, near rivers and streams, as they do not tolerate long-lasting droughts. It is therefore advisable to periodically bury good organic fertilizer at the foot of the plant, at least twice a year, it is also advisable to water the poplars should there be prolonged periods of drought. The mode of multiplication of plants of this species is usually by cuttings. These are rooted in spring, in a mixture of peat and sand in equal parts and the new seedlings are to be grown in the greenhouse for at least two years before being planted, as young specimens can sometimes fear the cold and the wind .
In autumn you can take the basal suckers, which usually grow adult plants in large numbers, to be buried in a soft compound and rich in organic matter, to allow a better development.
If it is necessary to proceed in the multiplication starting from seed it is advisable to use numerous seeds because the germination of the poplar is not very high.

Uses and Traditions –
Inside the Populus nigra there are two main varieties: the Populus nigra “Italica” variety, characteristic for the tall and narrow canopy, selected in Lombardy in the seventeenth century, is commonly known as “Lombard Poplar” and the Populus nigra variety “Plantierensis” “Very similar to the Lombard poplar but with a thicker and slightly enlarged crown.
The native species found on the Italian territory are:
-Populus tremula L .: in the mountains it replaces the P. nigra, pushing up to 2000 meters above sea level; it has a lighter, greyish-green bark, round-oval leaves with an irregularly toothed margin, a very thin petiole that determines the characteristic flicker of the leaves, even though there is minimal breeze;
-Populus alba L .: with which it shares the same habitat, it has palmate turquoise leaves with a white and hairy underside, white bark especially in young branches;
-Populus canescens (Aiton) Sm: some authors consider it a species in its own right, while others consider it a natural hybrid between P. tremula and P. alba, possessing characters now of one, now of the other species; in fact the leaves are similar to P. tremula gray and floccose below, while the bark is very similar to P.alba.
There are also innumerable natural hybridizations between these species, which are impossible to decipher macroscopically; from the cross between P. nigra and some North American species and in particular P. deltoides, some hybrids have been created, used in “industrial” crops for the production of paper.
The wood of the Black Poplar is of modest quality and has similar uses to other poplars, being used above all in the paper industry and for the production of vegetable charcoal. One of its main uses is also for the trees of the avenues leading to villas and rural properties.
The active ingredients in Populus nigra are: populoside, populoside, salicin, essential oil, resins, glycosides, flavonoids, organic acids, gum and tannins. Using these principles we can implement a series of therapeutic applications of various kinds. These are quite large: antiseptic, expectorant, antipyretic, anti-rheumatic, vulnerary and astringent. It is consequently indicated useful for the treatment of fevers, joint sufferings, insect bites, burns, skin inflammations in general, and of course the treatment of lung diseases. Some of the flavonoids present in the plant have antibacterial and antifungal properties. Salicylic phenolic glucosides are valid anti-inflammatory and counteract the aggregation of platelets. The active ingredients contained in the essential oil are fluidizing bronchial secretions. The plant complex exercises diuretic and hypouricoemic activity. Moreover, from the wood of the freshest sprigs an excellent charcoal is obtained (Belloc coal with anti-depressing and absorbing action).

Preparation Mode –
By taking advantage of the active ingredients of the black Poplar, extracts can be obtained with some applications; extracts are extracted from the gems that are used in the composition of treatments that purify oily skin and to obtain natural deodorants; in addition, the extract can be used as an active substance in mycotic dermatoses.