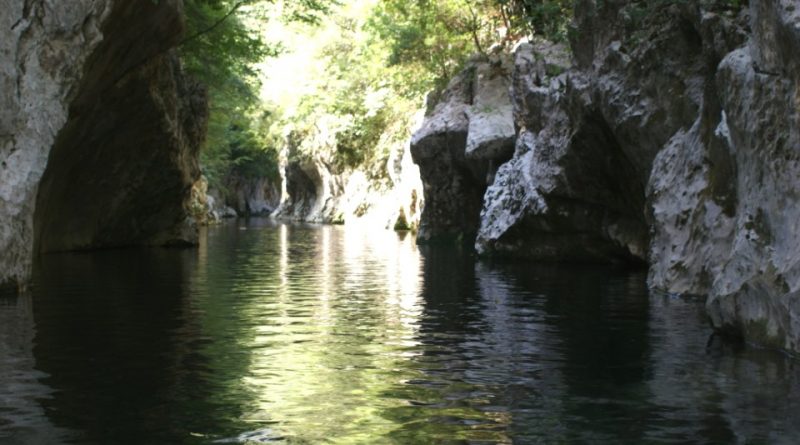 National Park of Cilento and Vallo di Diano and Alburni

The National Park of Cilento and Vallo di Diano and Alburni, identified with the codes: WDPA 63637 and EUAP 0003 is the second largest park in Italy. This park stretches from the Tyrrhenian coast to the foot of the Campania-Lucan Apennines, including the peaks of the Alburni, Cervati and Gelbison, as well as the coastal spurs of M. Bulgheria and M. Stella.
The National Park of Cilento and Vallo di Diano and Alburni was established in 1991. The original protected natural area of ​​about 36,000 hectares, entirely included in the province of Salerno, was subsequently extended to bring its surface to 181,048 hectares, which today it corresponds to the southern part of the province, between the Sele plain to the north, Basilicata to the east and south and the Tyrrhenian sea to the west. It includes, in whole or in part, the territories of 8 mountain communities and 80 municipalities.
This park since 1998 is a UNESCO World Heritage Site, since 1997 it has been a Biosphere Reserve and since 2010 is the first Italian national park to become a Geopark. The Park’s headquarters are in Vallo della Lucania. 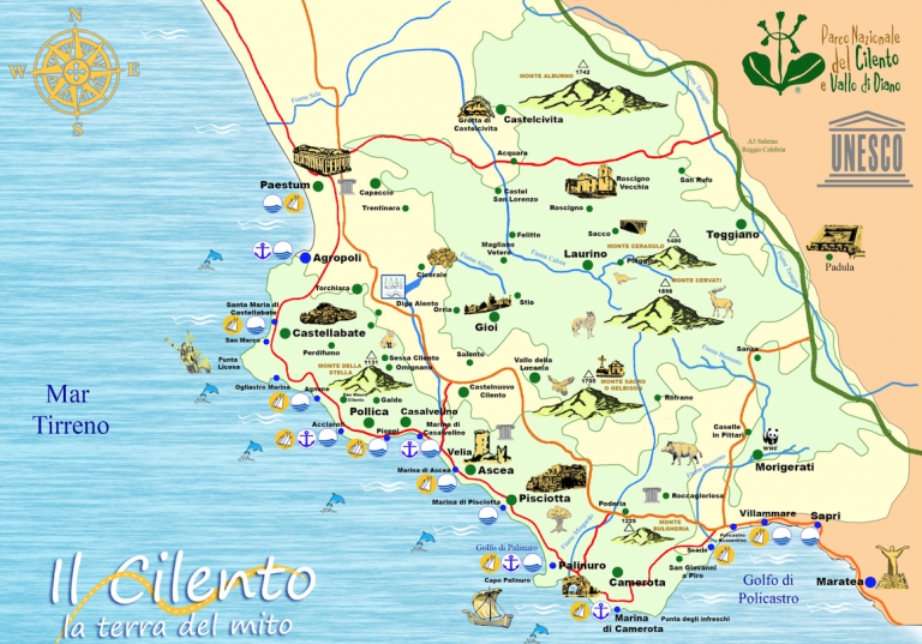 This park, in addition to its historical, geological and landscape riches, boasts an incredible wealth of floristic and faunistic biodiversity, among which we must remember the primula of palinuro, together with 25 different habitats.
In the Park, besides birches, white firs and reds, the vegetation of the coastal cliffs is of particular importance, including the rare sea lily while, in contact with the sea, the endemic Salernitana lives, on the cliffs the primrose of Palinuro, the carnation of the cliffs, the Centaurea, the florid Iberide, the Neapolitan campanula and the Bassia saxicola, an extremely rare bushy plant whose presence had previously only been found in enclaves on the islands of Ischia and Stromboli. On the coasts between Palinuro and Montecorice has been identified the broom of Cilento.
In the widespread coastal strip is the garrigue ampelodesma is the most widespread population in the coastal area, up to 700 meters, where we also find: broom, Phoenician juniper, Montpellier cistus, broom of Cilento, shrub mastic and villous disappearance. In the Mediterranean scrub we find: arbutus arbutus, heather, myrtle, terebinth, cistus of Montpellier, with populations surviving the anthropization, also of forests of spiny oak, carob and wild olive, and more rarely, dwarf palms.

Proceeding towards the internal areas we find more and more deciduous deciduous woods, holm oaks, Turkey oaks, oaks, maples, Platanus orientalis, black hornbeams, flowering ash and chestnut trees. Going up again, above 1,000 m, generally preceded by a strip of Neapolitan alder, it dominates the beech, with the rare barberry of Etna, and the saxifrages.
In the rock arteries, moreover, there is also the spotty of Lucania, a species of casmofita reported in some isolated stations, as a locality Limbida, on the western limestone walls of Monte Bulgheria, not far from Palinuro and on the limestone walls near the torrent gorge Sammaro, between Sacco and Roscigno.
Finally, it should be noted that 254 species of wild orchids have been recorded in the entire Cilento and Vallo National Park of Diano and Alburni, reported in all of Europe and in the Mediterranean basin. In short, a virtually unique biodiversity.
But also the biodiversity of wildlife is not far behind.
Among the mammals the most interesting species are the Moloss of Cestoni, the wolf and the otter, the Apennine hare, the vole of the wise, the fox, the marten, the reddish vole, the wild mouse, the yellow-necked mouse and the dormouse mouse, the latter prey of the wild cat; moreover the dormouse and the deer are not rare and the wild boars are numerous. There are also the Moloss of Cestoni, many species of bats, among which minopter, vespertilio maggiore, vesperscapieri of Capaccini and vespertilio of Blyth.
As for birdlife, we remember the golden eagle, the biancone, the peregrine falcon, the lanario, the imperial crow, the royal owl and, of great interest, the presence of the goshawk. Always among the birds of prey, we count: falco pecchiaiolo, Nibbio bruno, Nibbio reale. Among the birds in general, common are the black woodpecker, the nuthatch and the tottavilla, the nightjar, the calander and the small one, the sea jay, the collared nanny, and near the waterways the kingfisher , the dipper and the little courier. Finally, it is necessary to point out a wintering nucleus of the rare Corsican seagull.
Also the fauna of reptiles is very represented; they are worth mentioning: the cervone, the snake, the viper and the natrice. In cold waters there are also amphibians such as the rare spectacled salamander, Italian endemism, and the most common salamander, the Italian newt, the yellow-bellied toad, the Apennine frog, the agile frog, and the toad. Most of the Cyprinids of Community interest are reported, such as the barbel, not autochthonous, the Alburnus albidus and the vairone, then the odonate and at the mouth of the Mingardo the ninth.
Last but not least the invertebrates, among which we remember: Rosalia alpina, Oxygastra curtisii, Cucujus cinnaberinus, Osmoderma eremita.