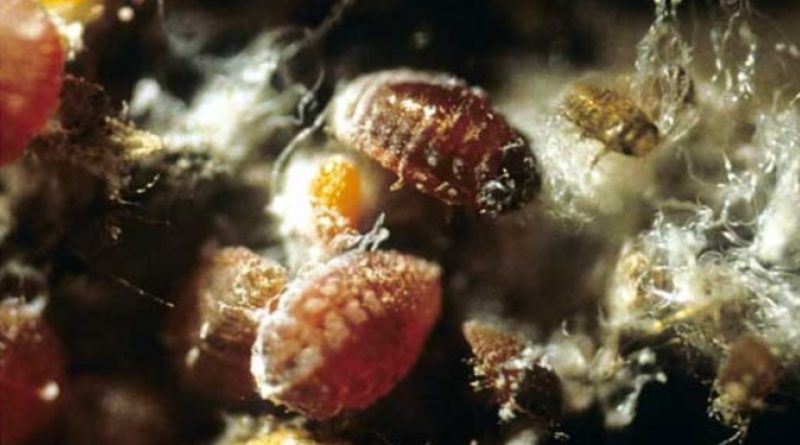 Morphology –
The pine woolly aphid lives in colonies on the woody organs (stem, branches and branches) of the host plants. The adults are characterized by a pinkish-orange color, which is difficult to notice because they are completely covered by a showy whitish waxy secretion;
Adult females measure 0.9-2.3 mm in length, with the ovoid body. The adults are characterized by sclerotized plates arranged in dorsal segments endowed with waxy glands, the legs are short and the antennas are hidden under the body. Adult females possess an ovipositor and the antennas are proportionally very short, with only 1-3 segments that are often partially or completely fused together. The eyes are composed. The eggs are laid in nests of white wax fibers secreted by adult females. The egg has an elongated-ovoid shape, about 0.2 mm long, of a freshly laid yellow color that gradually changes color to reddish-brown with the development of the embryo. The larvae are very small (0.2-0.4 mm), reddish brown, ovoid and wingless, with three pairs of legs and three segments; the eyes are represented only by three ocelli on each side of the head.

Attitude and biological cycle –
The Pineus pini winters in the adult female stage, on the Pine in case it performs an ano-cycle on this plant; in the unripe female stage it winters over Picea orientalis, in the case it performs its typical dioic cycle, between the Picea orientalis (primary host) and species of the genus Pinus (secondary guests); in this case the dioicus cycle is completed in two years. The affected wooden organs appear as if they were covered by a whitish encrustation, under which the Aphids live. The damage is due to the nutrition bites on the woody organs, which cause worsening and weakening, more or less serious depending on the infestations of the host plants. In case of a strong attack, the affected plants tend to defoliate especially in the inside of the foliage and at the level of the branches directly and more intensely affected.

Ecological role –
The presence of Pineus pines in the pine woods involves more or less thrusting, depending on the intensity of the infestation, and growth reductions and distortions; in nurseries there may also be high mortality of young seedlings with high percentages, especially under stress conditions, such as in the presence of hot and dry climate. Infested trees also become more vulnerable to attack by other pests and diseases.
The interventions for the containment of this aphid must be adopted and performed only in case of real need and in the presence of a strong infestation; it is advisable to take preventive action in the nurseries and in the production areas using products registered on the plants being treated. This intervention avoids to spread already infested plants in ecosystems where then the chemical treatment should be absolutely banned for the delicacy of the ecosystem.
The interventions are performed at the end of winter, against the wintering forms; normally more interventions are performed every fortnight. In case of heavy infestations it is advisable to repeat the interventions for a few years. The products to be used are white oils activated by Pyrethroid with interventions that tend to cover the affected wood organs.
To allow a useful biocoenosis between the Pineus pini and its predators, consider that it is advisable not to alter, as far as possible, the ecosystem of the pine forests; in different parts of the world, some of its predators have been observed: Chamaemyiidae, such as Leucopis obscura Haliday and Neolucopis tapiae Blanchard; the latter was introduced in Israel and the results of Pineus pini control proved interesting. Other important predators are the coccinellids, which in the presence of interventions carried out with insecticides (such as pyrethroids and especially phosphorganics) tend to decrease drastically obtaining, in the long run, an opposite effect, in favor of the increase in the population of the pine woolly aphid .