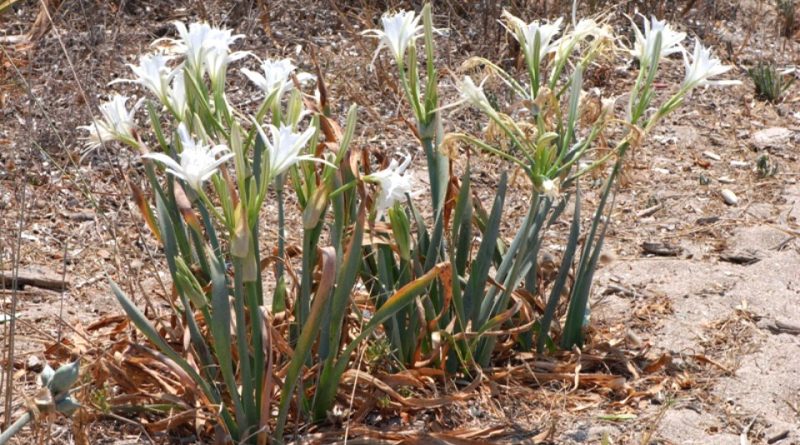 The sea lily or common sea lily (Pancratium maritimum L.) is a bulbous herbaceous species of the Amaryllidaceae family.

Systematic –
From a systematic point of view this plant belongs to the Domain Eukaryota, Kingdom Plantae, Division Magnoliophyta, Class Liliopsida, Order Liliales, Family Amaryllidaceae and then to the Genus Pancratium and to the Species P. maritimum.

Etymology –
The term Pancratium comes from the Greek πᾶς, πᾶσα, πᾶν pas, pása, pan everything and from κρᾰτέω cratéo to be strong, to dominate, to overcome, to overcome: that overcomes everything; probably due to the ability of the plant to resist the extreme conditions of the habitat consisting of very dry and brackish sands, or referred to its supposed medicinal virtues. The specific epithet maritimum comes from the Latin sea sea: maritime, marine, which grows near the sea.

Geographic Distribution and Habitat –
The Pancratium maritimum is a plant that grows on the sandy coasts of the Mediterranean Sea and the Black Sea, from Portugal, Morocco and the Canary Islands to the east in Turkey, Syria, Israel and the Caucasus. The plant is also found in southern Bulgaria and northern Turkey and on the coasts of Georgia in the Black Sea, where the species is threatened with extinction.
In Italy it is present along all the western and Adriatic coasts, major and minor islands included, excluding the northernmost coasts of Friuli Venezia Giulia. Today this plant is threatened for the exploitation of the coasts for bathing purposes; in fact, its Habitat is characterized by typical environments of the beaches, dunes and coasts. 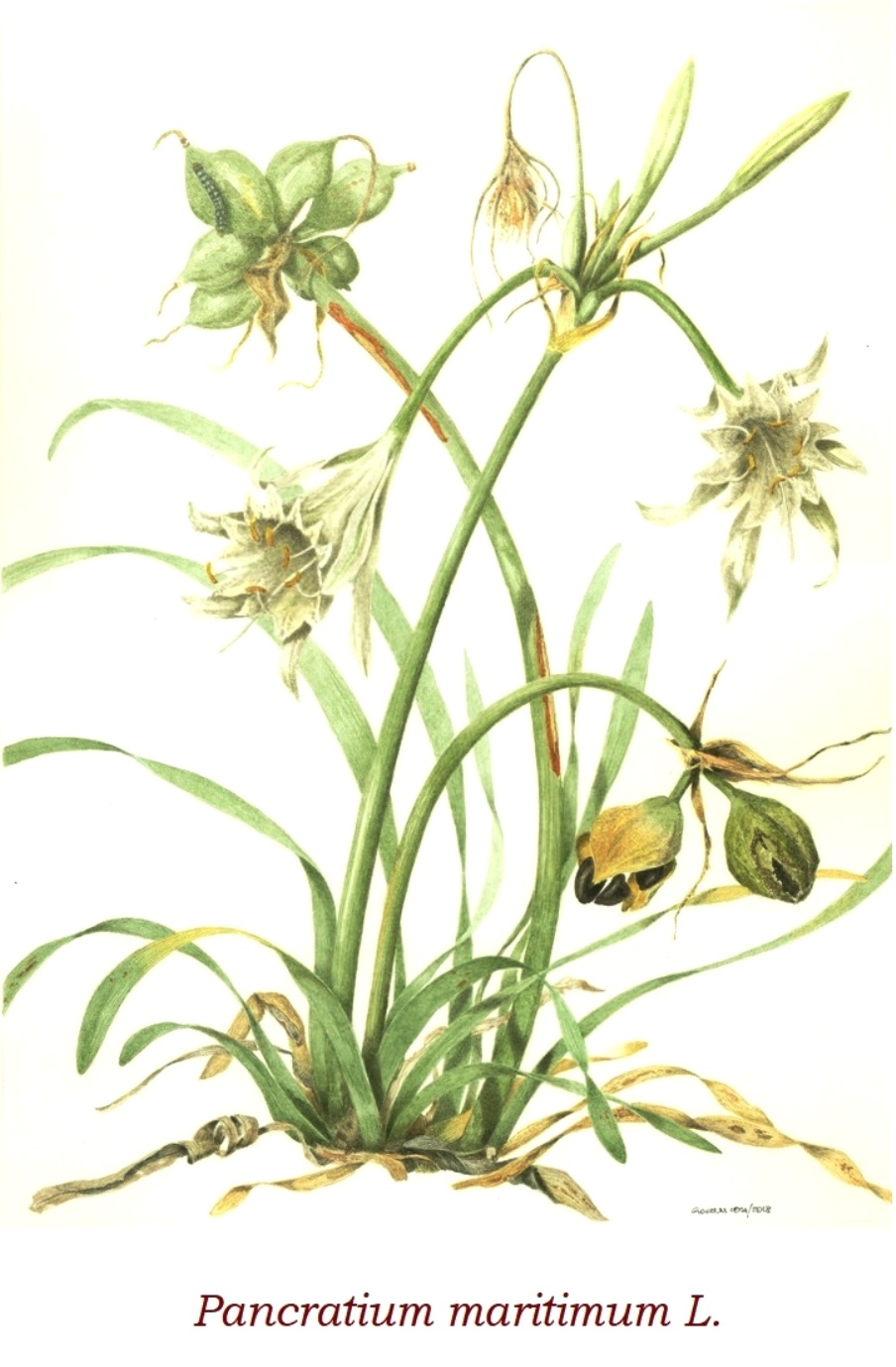 Description –
The sea lily is a perennial herbaceous species, 30-50 cm tall, with an ovoid bulb of 5-6 cm, with dark-colored membranace external tunics; with compressed scalloped scent at the apex of which has an umbelliform inflorescence with 5-10 flowers on pedicels of 5-10 mm and a basal membranous bivalve spatula of 4-7 cm. It has 5-6 basal leaves of glaucous green color, often rotting during flowering, 1-1.5 cm wide and 50-60 cm long, with linear and twisted spiral lamina.
The flowers are attinomorfi, hermaphrodite, fragrant and whose intense and persistent lily scent becomes perceptible mainly during the summer nights without wind; these are white-white, with a funnel-shaped perigonium, with a very long (5-8 cm) tube (ipanzio), of a greenish color, gradually dilated in the upper part, and with 6 lanceolate tepals, at the apex and with green streaks median on the outer side. The paracorolla (crown) is wide, widely bell-shaped, with 6 bifurcated lobes that give the appearance of 12 triangular teeth. The stamens are six and are inserted between the teeth of the paracorolla with filaments welded to it. The anthers are yellow, linear, in a dorsiflexion position. Ovario is trilocular in hell. The long-protruding stylus, thread-like at the stigma. The antesis is in the period between July and September and pollination is entomogama. From fertilization a fruit is born which is an obovoid-loculicidal capsule that contains numerous seeds protected by a black and angular spongy pericarp. Dissemination is a barocora. The floating seeds can favor the spread of the plant also through the marine currents.

Cultivation –
The sea lily is an easily cultivable plant, but requires a very sunny position and a very well drained sandy soil. However, it can be grown in areas with hot summers to induce flowering, while a timid flowering can occur in cooler climates. The plant tolerates temperatures up to about -5 °. Propagation occurs by seed or division after flowering.
It also grows on brackish and sandy soils in a very dry arid condition. The species being perennial can flourish in its third or fourth year of life. It can also be cultivated as an ornamental plant.

Uses and Traditions –
The Hebrew name used for its flower is חבצלת החוף (khavatselet ha-Khof), closely related to the Rose of Sharon (khavatselet ha-Sharon – חבצלת השרון), mentioned in the Song of Songs. Since the plant grows on the Sharon plain of the Mediterranean Sea coast, it is assumed that the biblical passage can refer to this flower that actually grows spontaneously on the sandy shores of the Mediterranean Sea and the Black Sea.
Being so rare and fortunately today strictly protected, it is clear that they should not be harvested or cultivated. In some regions of Italy in fact (Lazio, Molise, Basilicata, Calabria) is considered a protected species and the collection and removal of flowers and bulbs is prohibited. We could say that nature and its beauty do not necessarily have to possess: one can simply admire and share it.

Preparation Mode –
The Pancratium maritimum is a species that, due to the ecological erosion of the coasts, is threatened with extinction. It is therefore advisable not to collect it and use it for any reason.