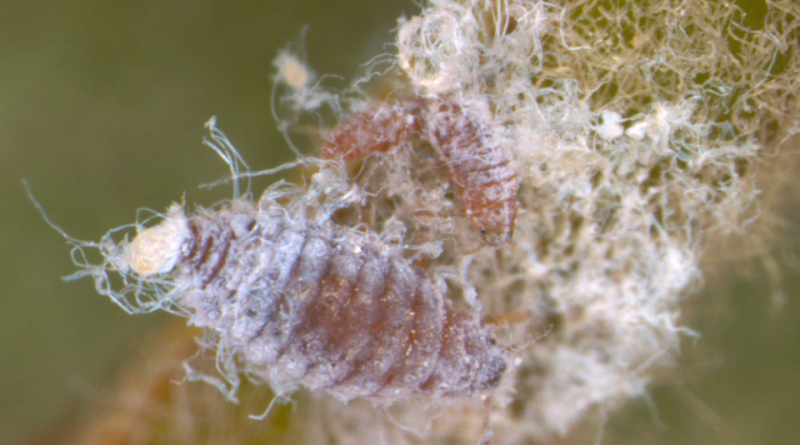 The woolly apple aphid (Eriosoma lanigerum (Hausmann)) is a homopterous Rincote of the Aphididae family.

Geographic Distribution and Habitat –
The woolly apple aphid is an aphid native to North America with diffusion now in all the regions of the world where apples are grown. It was recorded for the first time in Great Britain in 1787.

Morphology –
The Eriosoma lanigerum is a 1,5-2,5 mm long aphid, reddish-violet color, although the color is normally hidden by the white secretion, similar to cotton, of the special glands located in the abdomen that give it in fact, the common name of aphid of the apple tree. It is characterized by antennae with six segments and with the color of the tibiae that varies from dark brown to yellowish. The insect lives in colonies on the branches, on the roots or in the ravines of the trunk and branches. It can often happen that the colonies of the woolly apple aphid can be found in pre-existing lesions of woody organs caused by Nectria, Rodilegno, etc. or at the level of scarring calluses.
The damage of this aphid is due to the bites that result in the appearance, especially on the young branches and on the softer wood organs, of tumors or nodness due to hypertrophy and hyperplasia of the plant cells. These deformations are due to the saliva salts of the insect that stimulate the deformation of the organs and their histological and morphological disorganization. The plant inevitably shows itself to be suffering, especially in the case of strong prolonged attacks even over several years. Moreover, following the attacks of the Ariosoma lanigerum, the plant becomes more receptive to other serious plant diseases; especially at the entrance of fungal and secondary phytophagous cancers (eg Sesidi) which attack weakened plants.

Attitude and biological cycle –
The woolly apple aphid is in fact a monoic aphid that carries out its cycle on the apple tree; this insect winters in colonies, on the apple tree, at the stage of a young female, among the ravines of the rind or on the twigs. In spring, between April and May, the activity resumed, managing to make from 10 to 20 generations a year and prolonging, in favorable climatic conditions, its activity also in late autumn, until November. The diffusion within the orchards and in any case between the plants is ensured by the winged forms that appear, in summer, together with the attactive forms.
Among the plants that can accommodate this aphid we remember, in addition to the apple tree, the Pear, the genus Prunus spp, Pyracantha, Cotoneaster, Ulmus spp., Crataegus monogyna and others. It was also sometimes found on Chaenomeles spp.

Ecological role –
The containment of the woolly apple aphid must be set up with an integrated system that includes agro-ecological farming techniques and, possibly, biological control. The use of specific chemical treatments must be seen as the last solution and in any case with the guided fight technique.
The natural biological control of this Aphid is carried out with the use of the aphelinid megalithel Aphelinus mali; a small insect imported from the United States in 1920, which carries up to 9 generations per year and effectively controls this Aphid. It is a parasitoid that winters inside the parasitized aphids that are recognized, at the moment of the flicker of the hymenoptera, as blackish mummies with a clear exit apical hole. The parasitization of the Aphelinus mali is also evident because the populations of the woolly apple aphid have less flaky coating and are therefore easily noticed.
In order to apply the biological fight, during the winter, treatments are applied to the plants of apple trees with polysulphides or with yellow oils which are particularly harmful to Aphelinus mali; this allows to protect the parasitoid, wintering inside the colonies, applying the inoculative method; this method consists in removing the twigs with the parasitized colonies and placing them in the orchard after the aforementioned treatments.
If we must resort to the chemical fight with active synthesis principles we must operate in pre and post-flowering; these treatments, which are effective against other Aphids, by means of specific aphids, respect useful auxiliary entomofauna such as: Crysopidae, Coccinellidae and Sirfidi which, in that period, are not yet massively present in the ecosystem in question.
Prior to intervention, a sampling should be performed both on the trunk and on the branches; the intervention threshold is about 10 active colonies on about 100 sampled organs (10%).
As for the attacks on the roots, however, some clonal rootstocks can be used, which are on average resistant to the woolly apple aphid.