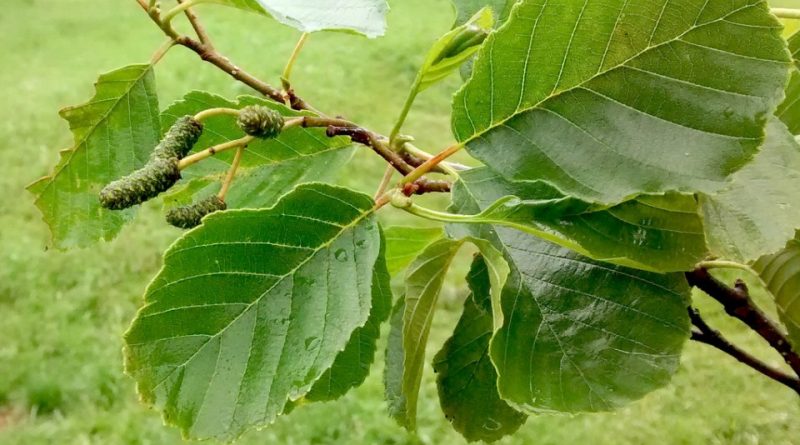 The black alder or common alder (Alnus glutinosa (L.) Gaertn., 1790), is an arboreal species of the Betulaceae family.

Systematic –
From a systematic point of view it belongs to the Eukaryota Domain, Kingdom Plantae, Magnoliophyta Division, Magnoliopsida Class, Order Fagales, Family Betulaceae and therefore to the Genus Alnus and to the A. glutinosa Species.

Etymology –
The term Alnus derives from Alnus, which was already the Latin name of the alder. The specific glutinous epithet comes from glúten gluten, glue: glutinous, viscous.

Geographic Distribution and Habitat –
The black alder is a tree native to Europe, northern Africa and western Asia and is present in Europe from the Iberian Peninsula to Russia to western Asia. This plant forms pure or mixed woods in the alluvial wetlands and along the banks of the watercourses, in an altimetric band that goes from the plains and being able to push up to about 1,200 meters of altitude. In Italy it is present in all the regions and is a typical element of riparian vegetation, associated with other plants typical of this environment, such as willows, poplars, etc .; association that in southern Italy and in the islands is frequent with oleander and willows and where it is often the arboreal element of greatest presence along the watercourses.

Description –
The black alder is a tree that can reach about 30 meters in height, with a dark, very dense pyramidal shape. The trunk is straight or arched, often polyphonic with a rough gray-brown peel, with horizontal lenticels, longitudinally fissured in the oldest specimens. It has deciduous leaves, alternate, petiolate, ovate or round, with a cuneata base and rounded or retusae apex and doubly serrated margin. The upper page is dark green, while the lower one is slightly lighter; the young leaves and the young twigs have the characteristic of being sticky for the emission of resin.
The plant has male flowers arranged in groups of 3-5 yellowish catkins and ovoid-shaped female flowers carried by long peduncles. The fruits are similar to small pine cones of green color when young and then brown-blackish and woody when ripe; these contain achenes endowed with a narrow wing; they persist for a long time on the plant.

Cultivation –
Alnus glutinosa is a plant that needs sunny locations, possibly in open areas, away from the shade of other trees to grow well. In nature, in fact, alders are colonizing plants, which tend to be overwhelmed by other species over the years. They are plants resistant to cold and even heat. It is a species with fairly rapid growth in the early years, where they quickly reach the final dimensions, but they are not very long-lived. As regards the soils where to insert them, it should be remembered that the black alder has been used for centuries to reclaim the low-fertile and water-soaked soils; they are plants that grow preferentially on stony soils, poor in organic material, even in the presence of stagnant water. For this reason, soils with acidic pH or areas subject to long periods of drought should not be selected. The multiplication occurs by seed, in spring, using the seeds of the previous year, which should be spent at least a few months in a cold place vernalizzazione) to simulate the winter season. In spring you can also practice cuttings, which must be rooted in a mixture of soil and sand in equal parts, which must always be kept moist until the rooting of cuttings is complete.
To underline the ability of this species regarding the symbiotic relationship of the roots with nitrogen-fixing microorganisms of the Frankia genus, part of the actinomycetes, a group of bacteria with mycelial growth. These bacteria are able to induce the formation of radical nodules with a mechanism similar to that of the rhizobes of the Leguminosae. For this reason the black alder, like other alders are species that enrich the soil of nitrogen.

Uses and Traditions –
Alnus glutinosa, besides performing an ecological function in the maintenance of river ecosystems, plays an important role in consolidating the banks of watercourses; for this reason it is a very useful species in the recovery of areas with considerable hydrogeological instability.
From the point of view of its uses, for commercial purposes, it can supply timber to be used in small carpentry, cabinet-making and wooden floors. The wood of the freshly cut black alder is yellow-orange, but with aging it has a reddish-orange color. It is a wood that resists well to water but is easily altered to the air. For this reason, especially in past eras, it was widely used as lumber for submerged artifacts. The alder wood has been used, throughout the history of man, to set up the piling support for stilt houses or to make hydraulic products; it was also used to build the foundations of buildings in Venice and is still used for the production of poles but also for fuel.
The black alder also provides different colors: red from the bark, green from the flowers, brown from the young twigs; the bark is rich in tannin, used in tanneries and for the preparation of ink. The drugs made from twigs, leaves and buds contain emodin, alnulina, glutan, tannins, mineral salts, which have astringent, diuretic, febrifugal and anti-inflammatory properties.
The leaves instead have diuretic and astringent properties. The popular pharmacopoeia also attributes to the leaves antirheumatic, vermifuge, antisecretive and in particular, galactofuges. In popular tradition, black alder leaves were used to reduce sweating or milky secretion.

Preparation Mode –
The black alder is used, albeit less than in the past, for its decoction of bark that is used in the liquor industry as a component of the bitters. In the popular tradition, black alder leaves were once used to reduce sweating or milky secretion.