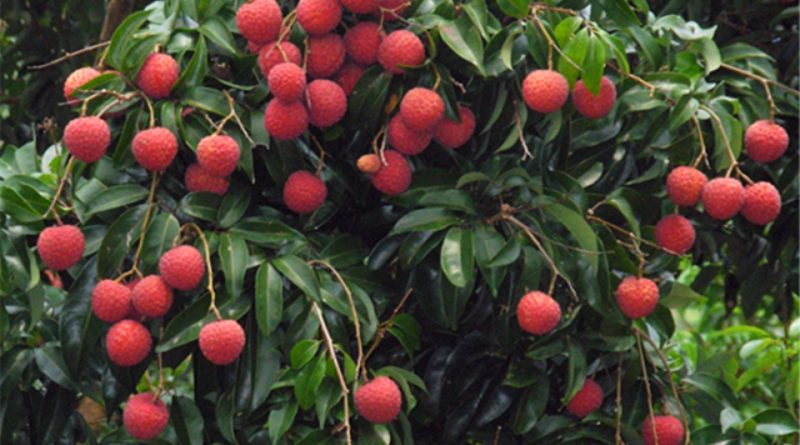 The Litchi or Chinese cherry (Litchi chinensis Sonn.) Is an arboreal species belonging to the Sapindaceae family.

Systematic –
From a systematic point of view it belongs to the Eukaryota Domain, Kingdom Plantae, Magnoliophyta Division, Magnoliopsida Class, Sapindales Order, Sapindaceae Family and therefore to the Lychee Genus and to the L. chinensis Species.

Etymology –
The term Litchi is the Latinization of the Chinese name there zhì or lai zi of this plant. the specific epithet chinensis refers to plants native or referred to China.

Geographic Distribution and Habitat –
Litchi chinensis is a species native to southern China and Southeast Asia, today cultivated in many parts of the world. This species, also known as “Chinese cherry”, is widespread in the Far East and is mainly grown in Madagascar, Thailand, Israel, and South Africa. 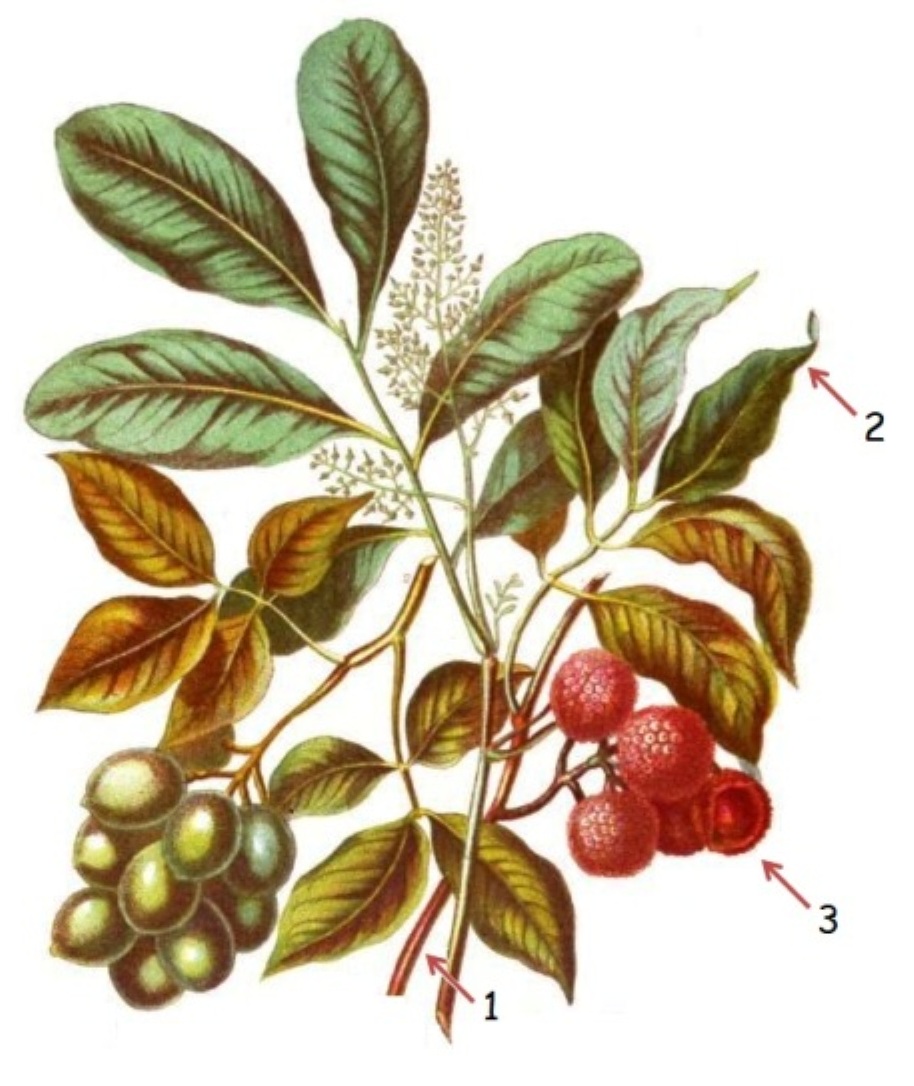 Description –
The Litchi is an evergreen tree species that can reach 10-15 meters in height, with gray-black bark and brown-red branches. The leaves that measure on average between 10 and 25 cm, are composite, with 2-4 pairs of leaflets. The flowers are placed on a terminal inflorescence, with many panicles sprouting on the vegetation of the year and growing in groups of 10 or more, reaching a length of 40 centimeters or more, with hundreds of small white flowers, yellow or green, with a characteristic fragrance.
The fruits measure up to 5 centimeters in length and 5 in width, with shapes that can be round, ovoid or heart. These ripen in a time between 80 and 112 days, depending on weather, climate and cultivars. The peel is thin but is not edible; this is covered with small pointed protuberances, with a green color at the beginning but red or pinkish-red when ripe. The part of the pulp and edible of the fruit is an aril, which surrounds a single elongated oval seed that is not edible and has dimensions of 3.3 cm in length and from 6 mm to 1.2 cm in width.

Cultivation –
Litchi chinensis is a plant that requires the mild climate typical of the subtropical regions, with cold winter season but free from frosts, summer not torrid and high humidity. From the pedological point of view requires medium-textured, rich, deep and drained soils, abundant and regular irrigations even in winter, if it is free from rain.
In Italy it can be grown outdoors almost exclusively in the South (Sicily and Calabria), taking into account however that the young specimens are much more sensitive to the cold (0 ° C) than those grown. For details of the cultivation technique refer to the following sheet.

Uses and Traditions –
Litchi chinensis has been known and cultivated for a long time; proof of this is a first written document attesting its cultivation dating back to 1059, while unofficial documents indicate the Litchi as a plant cultivated at least since 2000 BC. The cultivation begins in a southern area of ​​China, Malaysia, and Vietnam. As evidence of its origin, wild Litchi plants grow in southern China and on the island of Hainan. There are many stories about the use of fruit as a delicacy at the Chinese imperial court. It was for the first time described and made known in the West in 1782.
Still with reference to historical notes, it is recalled that in the first century after Christ, fresh lychees were so much requested by the imperial court that a special courier service was established with fast horses to bring these fresh fruits directly from Guangdong. Also during the Song Dynasty (960-1279) there was a great demand for lychees. This was the favorite fruit of the emperor’s favorite Li Longji (Xuanzong), Yang Yuhuan (Yang Guifei) so much so that the emperor carried the fruits to the capital with great expense.
The stories around this plant have interested the European explorers, so much so that Juan González de Mendoza in “The history of the great and powerful kingdom of China (1585)”, based on the stories of the Spanish friars who had visited China in the 70s of 1500 I speak very well of this fruit quoting verbatim: “They have a kind of plum that they call lechias, which are of an incredibly pleasant taste, and never harm anyone, although they eat a large number.”
In addition, the Litchi was described in its botanical aspects by Pierre Sonnerat (1748-1814) on his return from his trip to China and Southeast Asia. From that moment it was introduced to Réunion in 1764 by Joseph-François Charpentier de Cossigny de Palma and subsequently introduced also in Madagascar which is today one of the most important producers.
The Litchi chinensis has few varieties, the best of which is certainly the “Bengali-Mauritius”, which is grown in South Africa and which is probably best suited to our southern environments, ie in areas where lemon is grown. In addition to China, this plant is grown in Thailand, Vietnam, Japan, Bangladesh, Madagascar and northern India and also South Africa and the United States, which have a significant production of Litchi and Brazil, Pakistan, Bangladesh, Southern Japan, and more recently in California, Hawaii, Texas, Florida, in the wettest areas of eastern Australia, Madagascar, and the sub-tropical regions of South Africa, Israel, and Mexico.
The Litchi produces fruit which, in suitable areas, provides a production per hectare that can reach 200 quintals. The fresh fruit has a white, delicate and fragrant pulp. Litchi is rich in vitamin C and low in fat and sodium, it is useful for the nervous system and the circulatory system.
The fruit has a vast amount of polyphenols with antioxidant properties and in Chinese folk medicine it is indicated as a remedy for headaches, probably due to the vasodilatory properties of nicotinic acid. This last substance facilitates the purification of the blood by cleaning away from bad cholesterol and other toxic substances and so together other active ingredients with antioxidant power can be considered a functional food just towards the prevention of arteriosclerosis.
Finally, in the litchi there is a polyphenol called oligonol with antioxidant and anti-flu activity so it is able to fight viruses.

Preparation Mode –
The Litchi become part of a wide variety of dishes and desserts and, especially in China, they are particularly popular. For its consumption it is sufficient to peel the fruit completely from the rind and eat the juicy pulp paying attention to the seed. It is essential to choose the fruit at the right point of ripeness: brown spots and excessive softness are a sure sign of a now no longer fresh fruit.
The most suitable period for the purchase and consumption is that which goes from November to January and then returns in the month of April. The shelf life of Litchi fruits is up to 2 weeks both at room temperature and in the fridge.
With the pulp it is easy to prepare creams, jams and sorbets or better in the most common fruit salads.