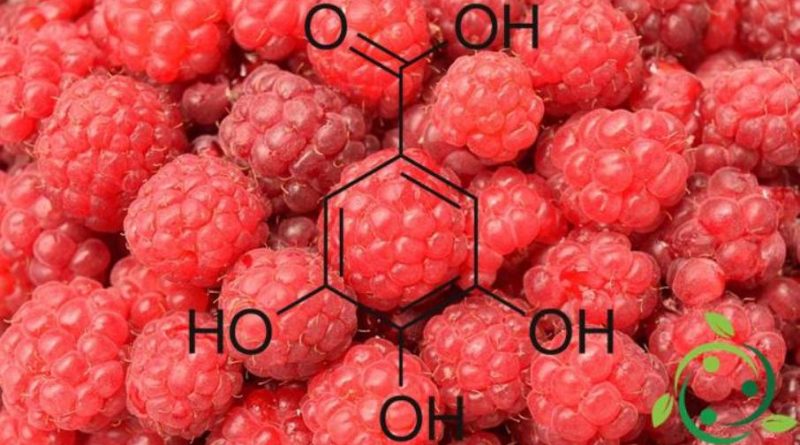 Gallic acid or, according to the IUPAC nomenclature, 3,4,5-trihydroxybenzoic acid, whose brute or molecular formula is: C7H6O5, is an organic acid contained in many products of plant origin. Gallic acid is found, for example, in species such as: Averrhoa carambola, Juniperus sabina, Arctostaphylos uva-ursi, Tussilago farfara, Colchicum autumnale, Arnica montana, Tanacetum vulgare, Rubus ulmifolius, Rubus idaeus, Mangifera indica, Fragaria spp., Papaver spp. . etc..
Particularly rich in gallic acid are also red wine, many fruits including blackberries and bananas, soy, in some spices including oregano and marjoram, in chicory and in many fruit juices made from pomegranate, apple, grapes and blueberry.
Gallic acid is a natural phenol that falls into the category of phenolic acids, with antioxidant action.
The origin of the Gallic term derives from the galls, excrescences that are formed on the leaves or on the branches of the plants, due to the parasitosis of fungi, bacteria, insects or mites. This is because gallic acid is produced by the plant to combat cell proliferation. It is a common acid in woody plant species, present in soluble form as an ester of quinic acid or glucose-bound in gallotannins.

Gallic acid, in addition to being found in the leaves and roots of some plants, is also found in seeds and fruits such as olives, and is therefore one of the polyphenols contained in olive oil.
Since ancient times, gallic acid has been used for various purposes: an example is constituted by the ferrugal ink used for centuries and obtained by mixing hydrolysable tannin, iron sulfate (II) and gum arabic.
Even the beneficial properties of gallic acid were known since antiquity and many foods containing gallic acid have been used for centuries as natural remedies for various diseases.
The American Indians used a blueberry drink, a fruit rich in Gallic acid, for its relaxing properties and because it was thought to be a blood purifier; from the bark of witch hazel, they obtained a balm that was considered effective in the prevention of wound infections, while with the leaves of witch hazel, they made tea for the treatment of colds.
In the medical field, gallic acid is a powerful antihaemorrhagic and is used in cases of menorrhagia.
Gallic acid has antifungal, antibacterial, antiviral, anti-inflammatory as well as antioxidant properties and, according to some, may be indicated in the treatment of cancer and diabetes.
In the food field, some of its esters (ethyl, propyl, octyl, etc.) are widely used as preservatives with an antioxidant action.