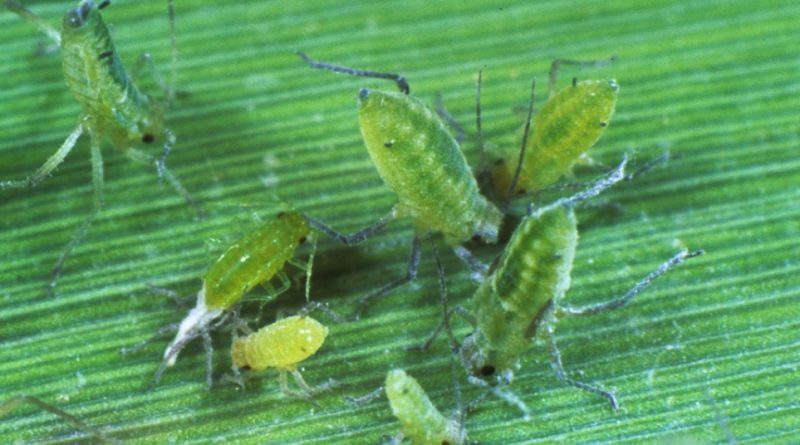 The fluffy aphid of the plum tree (Hyalopterus pruni (Geoffroy)) is a small homopterous rincote belonging to the Aphididae family.

Geographic Distribution and Habitat –
The fluffy aphid of plum tree is a small insect that prefers damper places; within restricted areas the concentration of the population is greater in the vicinity of riverbeds or areas with less insolation; this could be attributed to much faster population growth in wet habitats. It is also a cosmopolitan aphid with a larger distribution in the presence of the primary host (plum tree).

Morphology –
The floury aphid of the plum tree, which is similar to the congener Hyalopterus amygdali of the Peach, is a small greenish aphid that lives in colonies on the lower leaf page; also this aphid is covered by a characteristic whitish waxy secretion which gives the colony a powdery and clearer appearance. It is 2.5 to 3 millimeters long, narrow and oval in shape with greenish color on which the red eyes emerge. It also has half-body long antennas, a conical tail and some cornices.

Attitude and biological cycle –
Hyalopterus pruni is dioecious and develops its cycle among the genera Prunus (primary guests) and some spontaneous plants, such as reeds and marsh reeds (Phragmites communis, etc.) that are the secondary guests. The aphid exceeds the winter at the egg stage, blackish and elongated, on the primary host, attached to the twigs and the base of the buds. At the beginning of the spring period, with the first budding buds of the Susino, it resumed the activity originating some generations of fondatrigenie that remain until the summer, after which the Afide moved to the secondary guest. Subsequently, in the period between summer and autumn, it is brought back to the plum tree to lay the wintering egg. In some cases, in the presence of fresh and humid summers, they may remain on the primary host; sometimes it can also happen that the H. pruni move from one to another, spreading the infestation.

Ecological role –
The aphidous aphid of the plum tree, as mentioned, is host of plants of the genus Prunus, in particular of the plum and more rarely of the apricot, which can cause considerable damage.
Its nutritional activity produces a strong quantity of honeydew that settles on the vegetation; this, together with the waxy secretions, causes serious indirect damage due to asphyxia, due to occlusion of the stomata, to the onset of fumigation and burns, due to the slow effect of the honeydew. The most evident effect is that the affected leaves and buds, even if they do not crumple intensely, become slightly deformed, also exhibiting a slight atrophy; the damage, in case of strong infestations can be very high for the phyloptosis and the slight atrophy of the jets and for the fruits that remain dirty. To this primary damage is added in some cases the diffusion of the ring Pits, which is a virosis of which the vector seems to be just this aphid.
Moreover, symbioses are established with the ants that protect and spread them.
The rebalancing of the populations of this aphid towards ecological and productive tolerance thresholds is linked to the application of agro-ecological practices, among which the measures that allow the presence in the range of its natural antagonists. Among these we remember some predators and parasitoids:
– Coccinellid Coleoptera: Adalia bipunctata, Coccinella septempunctata and C. decempunctata, Harmonia conglobata, Scymnus spp., Exochomus spp .;
– Rincoti Antocoridi: genera Orius and Anthocoris;
– Chrysopid Neuroptera: genus Chrysopa and Chrysoperla;
– Diptera Sirfidi: Syrphus spp., Scaeva spp., Episyrphus spp .;
– Ditteri Cecidomidi: Aphidoletes spp .;
– Aphididae Hymenoptera: Aphidius spp .;
– Trombidides mites.
The presence of the antagonist entomofauna, which rebalances the biocenosis, is greatly hampered by agricultural specializations, by excessively narrow sixths, by the lack of grassing, by hedges that allow the increase of biodiversity. Furthermore, the goal of increasing production, with an increase in synthetic fertilizers, such as above all nitric salts, are among the major causes of exponential increase in their populations.
Among other things, the use of synthetic insecticides, such as phosphorganics in particular, often decreases precisely the useful entomofauna that in the end can no longer contain this aphid. At the appearance of the first colonies, it is possible to intervene with infusions of macerated and soap of Marseilles which, although being milder as insecticidal effect in the long run, allow the rebalancing of the populations and the containment of the floury Aphid of the plum tree.
Finally we recall the role of the microbiological struggle currently undergoing parasitic action fungi, such as Entomophtora fresenii, in France, and Verticillium lecanii, in England.