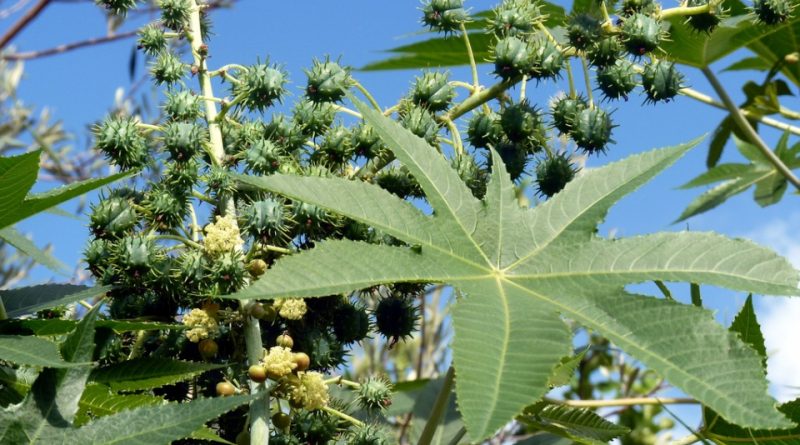 The Ricinus (Ricinus communis L.) is an arborescent species belonging to the Euphorbiaceae family.

Systematic –
From a systematic point of view it belongs to the Eukaryota Domain, Kingdom Plantae, Magnoliophyta Division, Magnoliopsida Class, Euphorbiales Order, Euphorbiaceae Family and therefore to the Genus Ricinus and to the Specie R. communis.

Etymology –
The term Ricinus is assonant with the Greek words κίκι cíci ricino, plant cited by several authors, and with κίκῐνος cícinos which concerns castor. Ricinus in Latin means “mint” due to the remarkable resemblance of the seeds with the known parasites. The specific epithet commonis is to say common plant, banal.

Geographic Distribution and Habitat –
Il Ricino is a plant with tropical origins, between Africa and Asia, whose domestication dates back to the 6th millennium BC. in South-Western Asia. It was introduced in Europe even before the Roman Empire. Today it is cultivated all over the world (in particular Asia and South America), and in all temperate or tropical climates, where the climate allows it, for its high content in oil that is used in pharmacies and in various industrial applications. The world production of Ricino seeds amounts to about 1 million tons per year. The main production areas are India, China and Brazil. 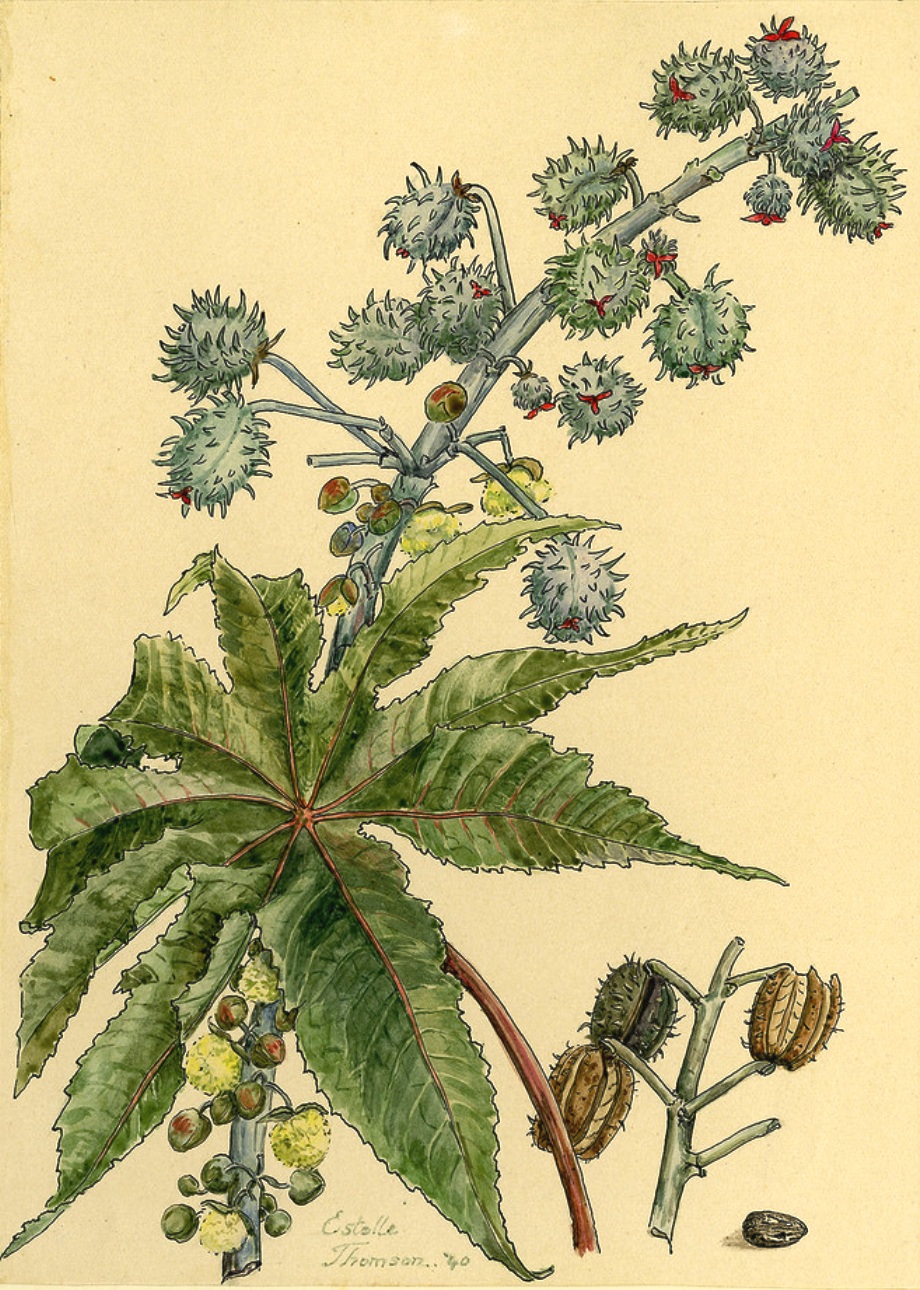 Description –
Ricinus communis is an arborescent species with a root system consisting of a large tap that develops in depth and from superficial lateral roots. The stem, which is of a more or less intense green or purple color, is erect and hollow, more or less branched, with heights varying from 60 cm to over 5 meters. The very large leaves are palmate-lobed with oval or acute 5-11 lobes, sometimes serrated, and alternate, sometimes with dark red veins. At the base of the petiole there are nectariferous glands. In the upper part of the inflorescences, which are in the panicle are the female flowers, while the male ones are found in the basal part. The Ricino is characterized by an antithesis of the two flowers that are not always simultaneous. The fertilization is allogamous and from this originates the fruits that are of the trilocular capsules that, depending on the variety, can be dehiscent or indehiscent and thorny or smooth. Even the ripening of the seeds is not simultaneous. The seeds have a compressed ovoid shape, with one of the most rounded ends and with the other provided with a protuberance called a caruncle.

Cultivation –
The Ricino is a species with a wide climatic and pedological adaptability. The cultivation of this plant does not present major problems, however, it is necessary to take care, if you want to have good yields, to provide good quantities of organic matter and to take care that drainage allows a careful disposal of the circulation water. The best yields are thus obtained on organic soils, well drained and with neutral pH. The preferred exposure is half-shade. For details of the cultivation technique refer to the following sheet.

Uses and Traditions –
The Ricino is also called Mint, due to the similarity of the seeds with the known pests, but also the milk grass or palm of Christ. Herodotus recounts that the ancients extracted from the castor oil to illuminate their homes and to anoint the body, while Pliny, in his Naturalis historia, recalls that the plant was cultivated by the Egyptians; in fact in the sarcophagi of the most ancient history of Egypt, in tombs dating back to 4000 BC, its seeds were found. In India too, the use of castor oil dates back to 2000 BC. for lamps and as a laxative
Castor oil has been used in pharmacies for various reasons and especially as a purgative for several centuries. Due to its constant viscosity, low freezing point and absence of residues, it is widely used in the lubrication of high frequency and high compression engines. In addition compared to other mineral oils, it has a higher lubricating power and a higher flash point. There are many industrial uses (preparation of fats, in leather tanning, toilet soap, ointments, in the wax and varnish industry, etc.).
Castor oil is added to cosmetic soaps and ophthalmic products; it is also used in the manufacture of candles, pastels, paints, high-yield fuels, carbon paper, polyamide fibers, leather preservatives, colorants for cotton and for waterproofing fabrics. The residue is used in fertilizers and in the manufacture of fibers, in particular to prepare the “rislon”, a sort of nylon that can be obtained from the protein component present in the oil, through polymerization. The castor cake, obtained from the processing of seeds, are used as organic fertilizers with a high nitrogen content. The present ricinine, insoluble in castor oil, being present in these, makes them toxic and unsuitable as feed.
In addition, castor oil keeps insects away and in particular cockroaches.
The seed contains an acid, ricinoleic acid which gives it purgative properties, and in the spermoderm contains a toxic product, the ricinine, which is a methyl ether of ricinic acid. This substance is a very strong poison. The oil content of the seeds varies from 40 to 57% according to the different bunches of the same plant, decreasing when it passes from the primary inflorescences to the second-order ones, and so on.
The ingestion of seeds, due to the presence of ricin, which is a protein (powerful natural cytotoxin) is able to cause cell death by blocking the protein synthesis activity of ribosomes. Causes serious organ poisoning with deadly danger.

Preparation Mode –
The oil extracted from the castor seeds is non-toxic, ricin is in fact not soluble in oil and remains on the pressing panel during the cold pressing of the seeds. Castor seed oil can not however be used in the kitchen while it is used in the cosmetic and pharmaceutical industry but also as a component of lubricants and paints.
As a natural cure and remedy castor oil is known for its laxative properties: one teaspoon of this oil produces a purgative effect in 6-12 hours. It also has antiseptic powers that fight typical seasonal ailments like colds. Castor oil packs seem to have many healing properties: they are used to treat arthritis, infections, swelling, inflammation of the nerves, headaches and even to normalize menstruation.