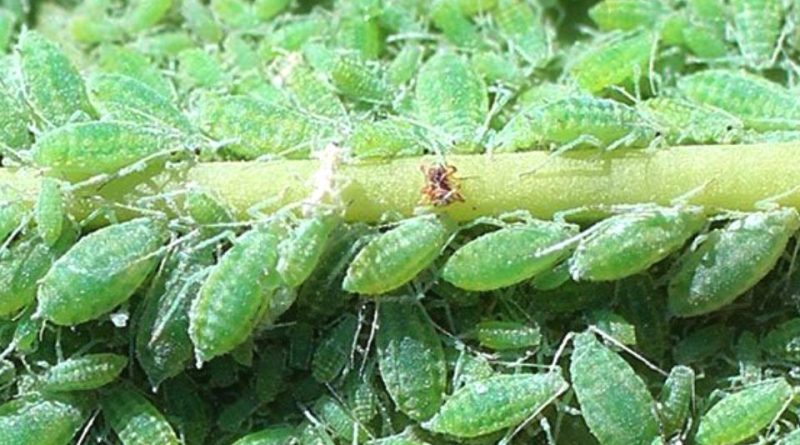 Geographic Distribution and Habitat –
The floury peach aphid has a cosmopolitan distribution area corresponding largely to the peach cultivation areas.

Morphology –
The peafowlous aphid of peach is a small dioicus aphid, greenish in color, which winters at the stage of egg on the primary host. The nymphs and the adults are covered by an abundant whitish waxy secretion, of powdery nature, from which comes the common name of the Aphid.

Attitude and biological cycle –
The peafyphous Afide of peach is a dioicus Afide which develops its cycle between the Pesco (primary host) and some spontaneous plants such as reeds or marsh reeds (Phragmites spp. And Arundo donax). The insect, after having wintered on the primary host as an egg, in the spring period generally during the period of budding, takes up again the activity originating 4 or 5 generations (founders and fondatrigenie) on the Pesco; the number of generations depends on the area, the environment and the vegetation conditions of the orchard. In the summer the migrant forms are brought on secondary guests and, subsequently, in the late summer-autumn period, the Afide returns to the Peach to lay the wintering egg.
The waxy secretion, emitted by this aphid, remains on the leaves which, together with the abundant production of honeydew, causes occlusion of the stomata, creating conditions of asphyxia in the leaves and shoots.
The damage is highlighted on the leaves that, as a rule, do not shrink but fold slightly at the edges; the attack of the Afide provokes, in any case:
– weakening of the shoots that grow and lignify badly;
– early fall of the leaves (by asphyxia);
– direct and indirect damage due to honeydew and waxy secretion that stains both the vegetation and the fruit;
– decrease in the commercial value of production.
The fight against Hyalopterus amygdali, as a rule, is not carried out in a specific way as with the normal treatments against the other aphids it is possible to control the population. For a good ecological rebalancing of its population must be careful, with normal insecticides not to destroy or decrease its natural enemies. These are mainly represented by predators and parasitoids among which we remember:
– Coccinellid Coleoptera: Adalia bipunctata, Coccinella septempunctata and C. decempunctata, Harmonia conglobata, Scymnus sp., Exochomus sp .;
– Rincoti Antocoridi: genera Orius and Anthocoris;
– Chrysopid Neuroptera: genus Chrysopa and Chrysoperla;
– Diptera Sirfidi: Syrphus spp., Scaeva spp., Episyrphus spp .;
– Ditteri Cecidomidi: Aphidoletes spp .;
– Aphididae Hymenoptera: Aphidius spp .;
– Trombidides mites.
Interesting is the result of some microbiological fight applications with some parasitic action fungi, like the Entomophtora fresenii, in France, and the Verticillium lecanii, in England.

Ecological role –
The Hyalopterus amygdali carries out its biological cycle, as seen, between the Pesco (primary host) and some spontaneous plants, including the reeds or the swamp reeds (Phragmites spp. And Arundo donax), living in colonies on the lower page of the leaves.
As for other aphids, the presence of this insect is linked to bad cultivation practices such as: excessive specializations, fertilizations with nitric nitrogen (which soften the tissues increase the palatability of plant tissues), absence of other plant hosts (important the presence of hedges and bushes). For this reason, in the agricultural sector, the preliminary agroecological planning of crops is the first prerequisite for a good rebalancing of the presence of these aphids.