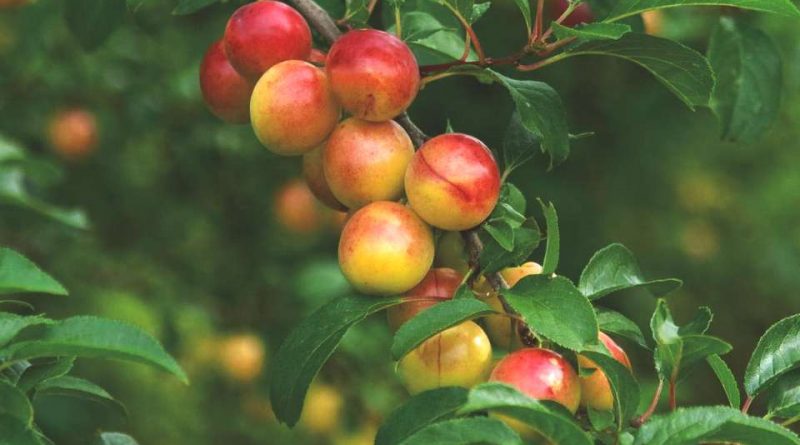 The Cherry plum or Myrobalan plum (Prunus cerasifera Ehrh., 1784) is an arboreal species of the Rosaceae family.

Systematic –
From the systematic point of view it belongs to the Eukaryota Domain, Kingdom Plantae, Magnoliophyta Division, Magnoliopsida Class, Rosales Order, Rosaceae Family and then to the Genus Prunus and to the P. cerasi fera Species.
The common term cherry-plum is synonymous.

Etymology –
The term Prunus comes from prunus, in Pliny, Latinization of the Greek προῦμνη proúmne plum, pruno in Theophrastus and Dioscorides, probably derived from a pre-Greek language of Asia Minor, see also prunum plum, plum from the Greek προῦνον proúnon in Galen. The specific epithet Cerasifera derives from Cerasus, which is the name given by the Latin to the amareno and that derives from Cerasunte, a locality near the Black Sea. The common term Mirabolano comes from the Greek myron, “odorous ointment” and bàlanos “acorn” , that is: fruit that produces a fragrant ointment.

Geographic Distribution and Habitat –
The Cherry plum (or Ciliegio-plum) is a tree with origins in the area of ​​the Caucasus and western Asia; this plant was introduced in Europe in pre-Roman times. It is a naturalized archeophyte species, typical of the mesophilous broad-leaved bushes that adapts itself indifferent to the substratum, provided it is well drained; grows from the floor up to 800 m s.l.m .. 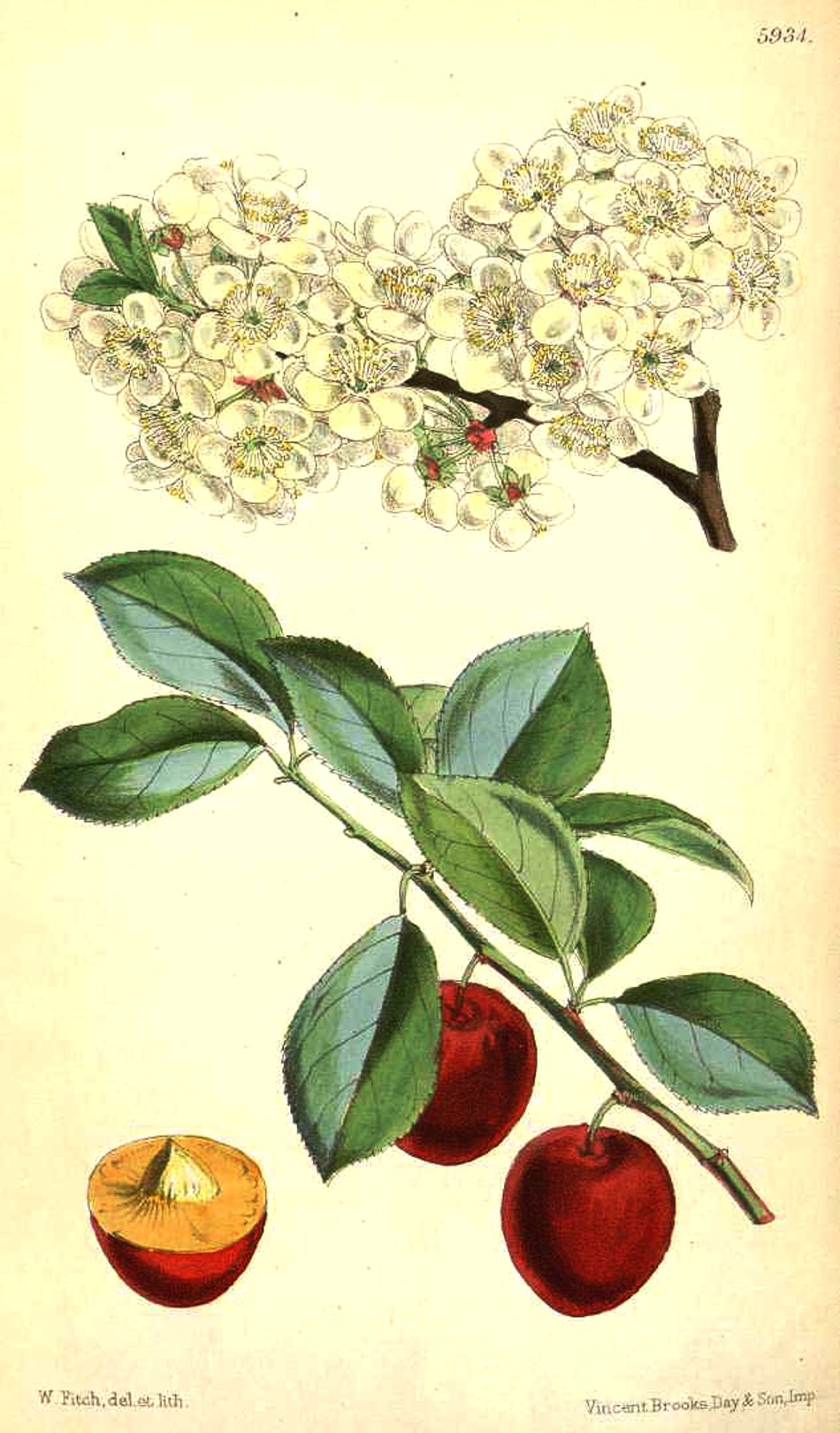 Description –
The Prunus cerasifera is a tree that can reach the dimension of 8 meters, with erect stem, sometimes twisted as well as its ramifications, divided and branched from the base or up; the trunk is slender, right then sinuous and gnarled with a smooth rind in the young specimens, rough and furrowed in the adult ones and brownish in color. The wood of myrobalan has a characteristic apple smell. The foliage has a color ranging from light green to dark red-violet in some cultivars. The leaves, 6-7 cm long, are simple deciduous with an ovoid-elliptic lamina with a serrated margin and a well marked penninerval rib with a color that varies from light green to dark green to dark purplish red. The flowers are solitary, which develop in March-April on peduncles of 1 centimeter, are more than 2 cm broad, with white and pink petals in some cultivars. The antesis goes from March to April. The fruit is a small spherical drupe, up to 3 cm wide, of red or rose-yellow when ripe, sweet and succulent.

Cultivation –
The myrobalan is a rustic tree, with low need for irrigation, resistant to many pests and that does not fear the cold and resists high temperatures and is adaptable to different soils. Like all flowering and fruit trees it needs exposures in bright and sunny places for many hours a day. As for the pedological characteristics, even if it prefers fresh and well worked soils, the Mirabolano adapts to any type of soil, clayey, calcareous or rocky, provided it is well drained.
In winter the Myrobalan enters vegetative rest and does not need to be watered. The plant naturally multiplies by seed and by agamic means by cuttings. The seeding of Myrobalan takes place in spring or in autumn by planting seeds in a specific soil. The multiplication by seed is very slow and because of genetic variability does not ensure specimens with the same characteristics of the mother plant. The multiplication by cuttings is instead used to obtain plants that have already grown, strong, vigorous and homogeneous. For details of the cultivation technique refer to the following sheet.

Uses and Traditions –
The myrobalan is a species that in our territory is known above all as ornamental but it is also used as rootstock for other types of cultivated Prunus. In France, however, there are also fruit crops. This plant is quite common in parks and gardens, especially the Pissardii variety, with pink flowers and beautiful dark red-violet leaves. The fruits are edible, sweet and watery when fully ripe.
The Prunus cerasi fera is appreciated for the fruits, which ripen in June-July and which can be used for the preparation of excellent, slightly acidic jams. The seed contains hydrogen cyanide: consumed in certain quantities it can also cause serious problems.
The plant plays an important role for the pollinators; it is a good mellifera because its flowers are very bung by bees. The production of monogllorose honey from Mirabolano is interesting, which is rather difficult due to the limited diffusion of the plant.

Preparation Mode –
The fruits of myrobalan have a characteristic sour taste that becomes sweeter when fully ripe, so they can also be eaten fresh. With these fruits you can prepare jams of excellent flavor, slightly acidic. If eaten not yet fully ripe it has a laxative effect.