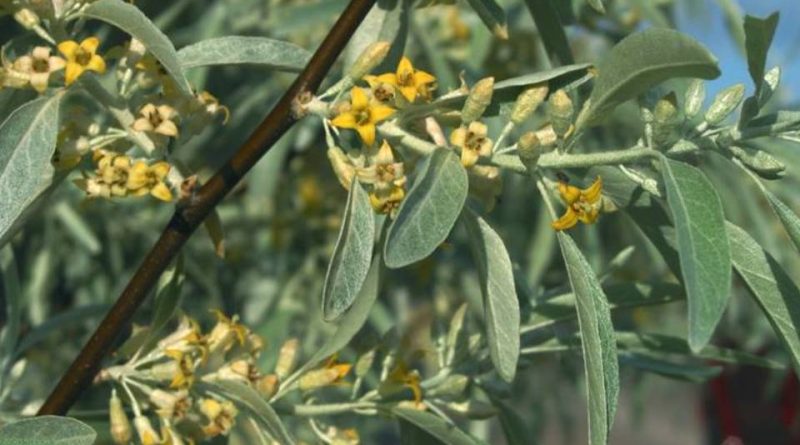 The Olivagno or Bohemian olive tree (Elaeagnus angustifolia L.) is an arboreal species of the Elaeagnaceae family.

Systematic –
From the systematic point of view it belongs to the Eukaryota Domain, Kingdom Plantae, Magnoliophyta Division, Magnoliopsida Class, Order Proteales, Family Elaeagnaceae and therefore to the Genus Elaeagnus and to the Specie E. angustifolia.

Etymology –
The term Elaeagnus comes from the Greek ἐλαία elaía olivo and ἀγνός hagnos pure, white, perhaps in reference to the fruit. The specific epithet angustifolia derives from narrow, narrow angustus and from folium leaf: with narrow leaves or leaflets.

Geographic Distribution and Habitat –
Olivagno is a species native to an area located between southern Europe and central-western Asia (up to Afghanistan). The plant was introduced in Europe in the seventeenth century, and today is widely used as an ornamental plant. Its natural habitat is that along watercourses, coasts, dunes where it does not fear high salt concentrations. 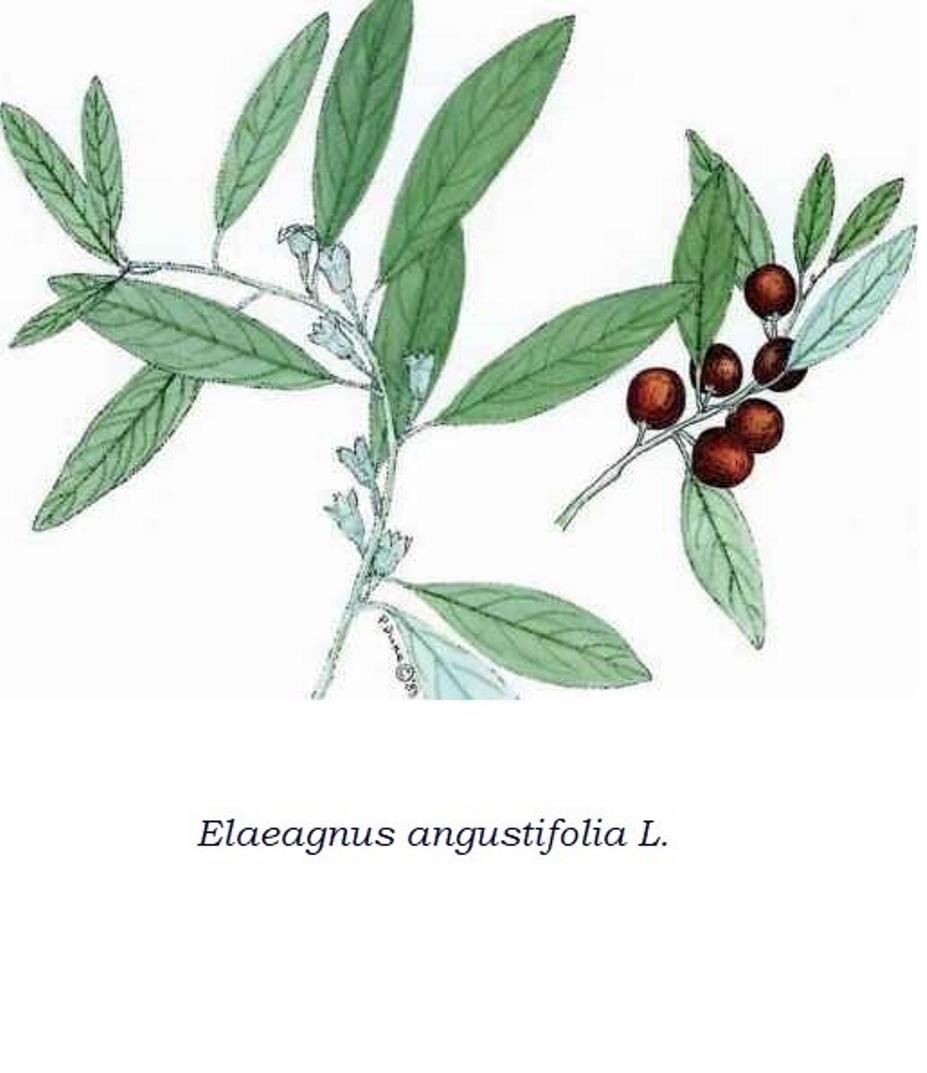 Description –
Elaeagnus angustifolia is a shrub or small deciduous tree that can reach 7-8 meters, with dense and rounded foliage. The bark is thin, with shallow fissures and with branches that are provided with thorns and covered with a silvery patina. The leaves are 4-9 centimeters long, alternate, lanceolate, gray-green. On the lower page they have a whitish patina that protects them from excessive perspiration.
The flowers are single, in pairs or three, axillary, provided with peduncle, with tubular calyx ending in a 4-tooth flap, dirty yellow, up to 8 mm long. The Antesi is between April and June.
The fruit, which is a pseudodrupa, is similar to an olive and is yellowish, up to 2 cm long, edible even if it has a little juice.

Cultivation –
Olivagno is a very rustic plant that is able to survive in very poor soils where other plants would be struggling. It is able to enrich the soil because the plant performs the function of nitrogen-fixation, thanks to the presence of radical tubercles that contain symbiont bacteria fixative of atmospheric nitrogen; for its cultivation, however, it is better to choose well drained soils because it can not stand the water stagnations. The plant bears the cold very well and for this reason it is often used to create windbreaks useful to protect gardens and terraces and create a more comfortable environment. As far as water supplies are concerned, Olivagno does not need large quantities of water, usually rains are sufficient; during the hottest periods, especially in the case of very young plants, it should be irrigated at least every week, avoiding stagnation.

Uses and Traditions –
For the less experienced the olive grove can be confused, especially for the color of the leaves to the olive tree (Olea aeuropea L.) but is distinguished by the smooth trunk, twisted in old specimens, with scaly rind, never fibrous nor furrowed and stiff leaves .
The Elaeagnus angustifolia, being a rustic species, is widely spread as an ornamental plant due to the silvery color of the leaves. it is a colonizing species, a pioneer, heliophilous that does not fear high salt concentrations. Used in the consolidation of slopes, for the formation of windbreak hedges, especially along the watercourses, in the dunes and in sandy and unstable soils, thanks to the presence of its radical tubercles.
The fruits are edible even if they have little juice.
In Iran, the dry powder of the fruits, mixed with milk, is used to combat rheumatoid arthritis and joint pains.
The fruits, which are small, olive-shaped drupes, about 2-3 cm long, of reddish-orange color, have a sweet and aromatic taste and floury, not too juicy consistency. They can be consumed fresh or used for the preparation of juices, jellies, sorbets, concentrates and oil. The fruits have anti-inflammatory properties useful in the treatment of phlegm, cough, chronic cough, inflammation of the respiratory tract, rheumatoid arthritis and joint pain in general.

Preparation Mode –
The fruits of this plant can be used for the preparation of jellies, sorbets and soups, while the oil extracted from the seeds can be used with the syrup as an electrify in the treatment of phlegm and bronchial affections.