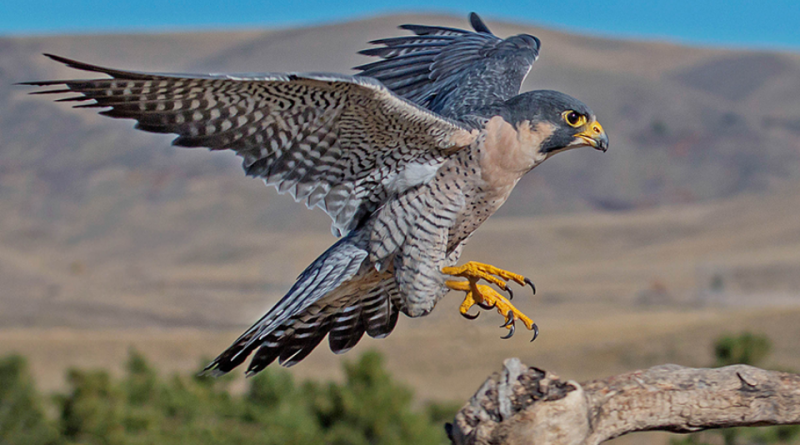 The peregrine falcon (Falco peregrinus Tunstall, 1771) is a bird of prey belonging to the Falconidae family.

Geographic Distribution and Habitat –
The peregrine falcon is a cosmopolitan species, also because it can count on the different adaptability of its 21 subspecies that live on the whole planet. Thus we find this bird of prey in different terrestrial environmental conditions: from the cold of the Arctic tundra to the extreme heat of the Australian deserts. We find it in Europe, Asia, Africa, North America, South America and Oceania. In Italy it is mainly found in the open spaces of almost all the biotopes and on the lake basins where there is an abundance of birds. In recent times it has also adapted to living in some cities.

Description –
Falco peregrinus is distinguished by having a length between 34 and 58 cm, with wingspan of 80-120 cm. Between male and female there is an evident sexual dimorphism; females are about 30% larger than males. In this way the males weigh from 440-850 g, and the females 750-1250 g. Males and females have similar plumage and fluctuations in color values, plumage and weight are related to different subspecies.
The peregrine falcon is recognized for its back and pointed wings which in adults normally have a color ranging from bluish black to slate gray, with some characteristic streaks of the subspecies. The tip of the wings is always black.
The ventral part is striated with thin brown bands of dark or even black color. Even the tail has the same color of the back but the streaks are clear; this is long, thin and rounded at the end with a black tip and a white band at each end. The head is black and stands out from the sides that are light in the neck and in the white throat.
It has yellow legs and beak and claws of black color. At the tip of the beak is a notch that allows the hawk to kill the prey by breaking the cervical vertebrae of the neck. The young of the species have a darker color with lower parts that are striated instead of crossed; in these the “wax” and the orbital ring are pale blue.
The specific name “peregrinus” refers to the dark coloring of the head feathers, which recall the black hood worn by the pilgrims. 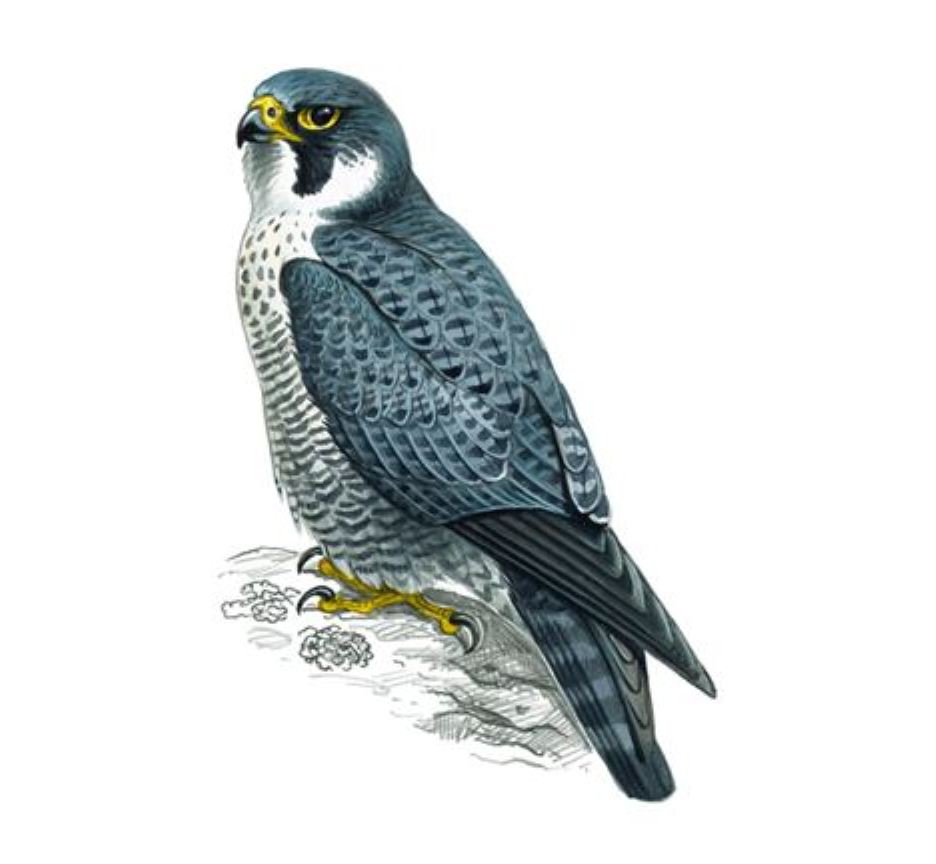 Biology –
In the peregrine falcon, a couple remains together for the whole life and, in the case of the death of one of the partners, they couple again.
On average, the duration of the brooding ranges from 32 to 37 days, depending on the latitude and the humidity and temperature conditions of the chosen area for brooding. For each brood you can have from 2 to 6 eggs but usually the brood is 3-4 eggs. It also broods in prominent architectural structures in tall buildings such as church towers, old factories where they mainly hunt pigeons. The peregrine falcon on average reaches a maximum age of 17 years in the wild; in captivity we have specimens that exceed the age of 20 years. The daily requirement of the peregrine falcon is about 140 grams of meat.
The peregrine falcon can reach a maximum speed of 385 km / h, which makes it the fastest living animal. This speed makes the peregrine falcon one of the most skilled hunters in existence, since it can swoop down volatiles that are higher in horizontal flight. To do this, hunt, then, launching himself from greater heights of his prey that reaches and prey in dive.
The peregrine falcon catches its prey almost always with the so-called “stoccata”, that is a blow with both claws, which unbalances and stuns its prey that is then killed on the ground with the powerful beak. With the exception of snow-covered or very bare land, the peregrine falcon never hunts on land and never terrestrial animals.

Ecological role –
Falco peregrinus is a bird of prey, as mentioned, widespread and, historically, hunted practically all over the world. The Peregrine Falcon has attracted the attention of the scholars in the post-war period, when they began to study the consequences on the fauna and man of the massive use of pesticides in agriculture. Intelligent, fast, very capable predator, since the Middle Ages it has been used in falconry, while for the ancient Egyptians it was even a divine symbol, incarnation of the powerful god Horus. This raptor is considered a super predator and for this reason its populations are subject to considerable variations, due to the fluctuations of the populations of prey (almost exclusively birds), to the persecutions carried out by man (for example the systematic destruction of specimens in the Highlands Scots, where hawks predominately prey on white partridges (Lagopus lagopus), or during World War II, when the British government tried, unsuccessfully, to destroy the species to protect the traffic of the carrier pigeons, used to keep in contact with the French resistance.
In Western Europe and North America, shortly after 1950, especially for the use in agriculture of DDT (para-dichlorodiphenyltrichloroethane) and DDE (dichlorodifenildicloroetilene), began the collapse of the populations of peregrine falcon that led some populations to complete collapse .
Following the announcement of the DDT, the strict protection of nesting sites from the removal of eggs and nestlings for the rebirth of falconry and the important reintroduction interventions, the populations, starting from the seventies, had a progressive and almost total recovery. The species, among other things, willingly adapts to the presence of man, so much to nest often in city buildings.
The biologists could later prove that the insecticides in question cause an enzymatic alteration of carbonic anhydrase and calcium ATPase, which transport calcium from the female’s bloodstream to the egg-forming shell.
The same alterations, and therefore the destruction of populations, were found in other falconiformes, in particular in those that feed mainly on birds, for example in the sparrow-hawk. The methods of poisoning were to be found in the food chain: insect-bird-hawk insect.
For this reason, in a few years we were convinced to banish the use of DDT and DDE, at least in Europe and North America, while much remains to be done and demonstrated in the use of other pesticides and herbicides that act on the ecological chains and food with exponential effect.
The peregrine falcon, like other species of hawks and birds of prey in general, is associated with the peaks of the sky and also with the stars, especially the Sun. This approach was found in the Egyptian mythology that identified in Horus, son of Osiris and Isis, the solar god par excellence. Even if there is no evidence or certain data on which falcon was to be referred to, the most likely hypothesis is that it was the peregrine falcon, whose dark feathers under the eyes, forming a kind of crescent, closely resemble the ‘Eye of Horus, very important mystery symbol linked to prosperity and sovereignty.
The veneration of the Peregrine Falcon was handed down and continued with other cultures including the Greeks where this hawk represented the messenger of Apollo. In the ancient Nordic peoples, the goddess Freya had a cloak made of hawk feathers that allowed her to carry it wherever she wanted; finally, for other populations of the world, from the Native Americans to those of Polynesia, the peregrine falcon was associated with the capacity for knowledge and divination.