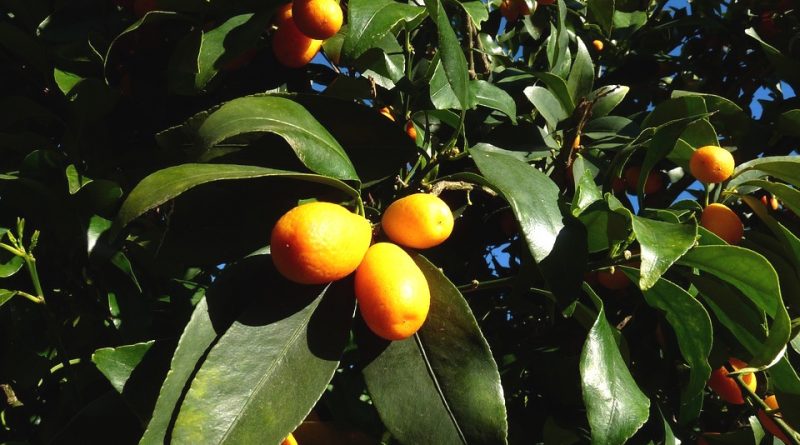 The kumquat also known as fortunella or Chinese mandarin or kingen (Citrus japonica Thumb., 1784) is a small tree species of the Rutaceae family.

Etymology –
The term Citrus comes from the Latin name of the cedar and lemon, from the Greek Greek κέδρος kédros cedar and κίτρον kítron lemon. The specific japonica epithet, due to its ancient cultivation in Japan.

Geographic Distribution and Habitat –
Citrus japonica is a species originating from China and has long been cultivated in Japan. The first kumquat plants were introduced in Europe in 1846 by Robert Fortune, collector of the London Horticultural Society. Today it is cultivated a little in all areas with a temperate climate. 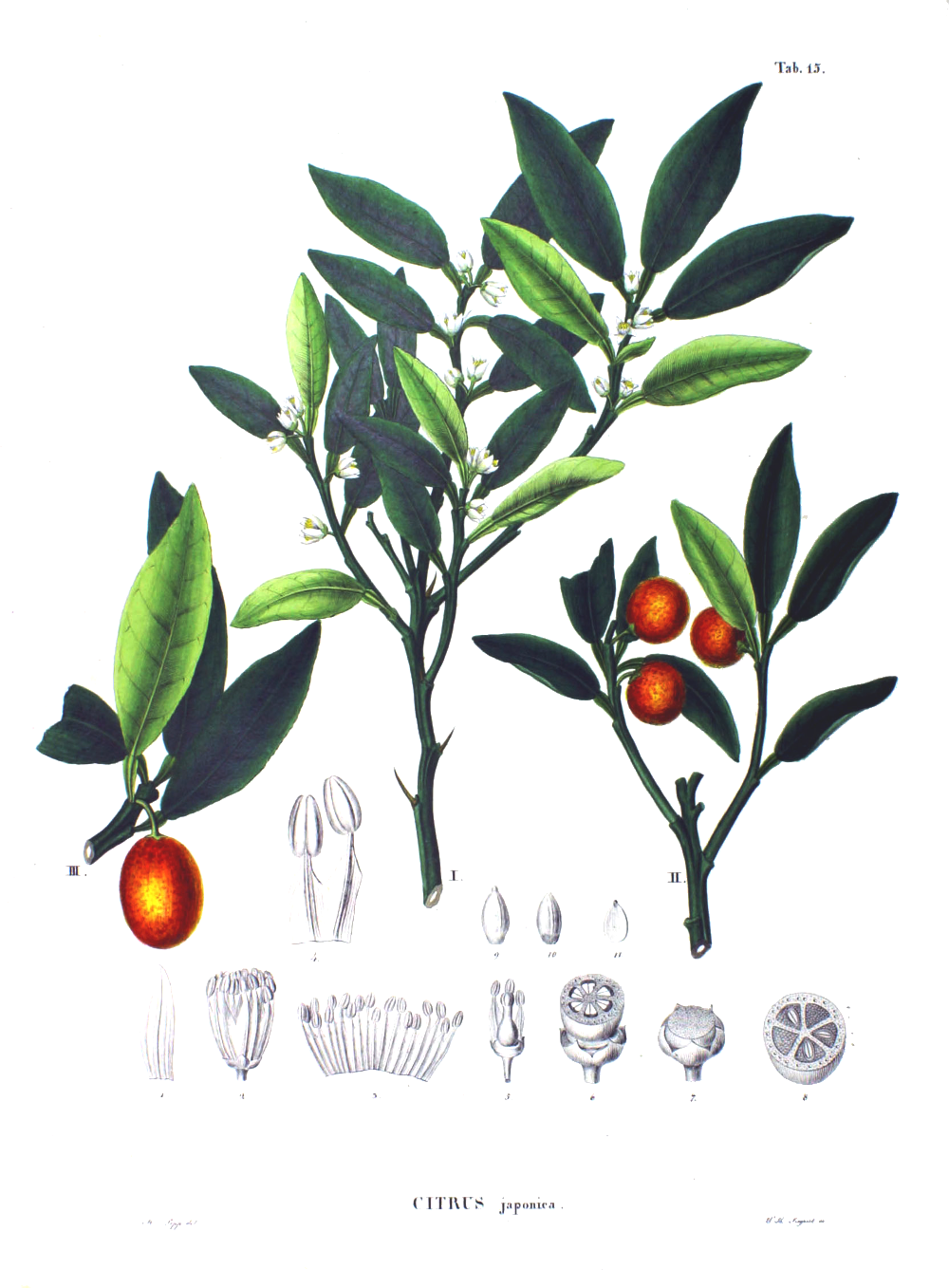 Description –
Citrus japonica is a small tree species, in the form of an evergreen tree, which can reach a size of 2.5-4.5 m; the branches are thick and can carry small spines. The leaves are deep dark green, the white flowers, which are formed singly or in groups by the buds. The fruit is a small citrus fruit, 3-4 cm long and 2-4 cm broad, with a yellow to red skin color and an oval or round shape, depending on the variety. The fruit is produced in the period from the end of November until February. Compared to other species of the genus Citrus, the winter Kumquat enters a period of lethargy in which it no longer puts new gems or jets.

Cultivation –
The kumquat is cultivated a little in the tuette areas with temperate climate and especially in China, Korea, Japan, Europe (Corfu and Greece) and in the southern United States (Florida). In Italy, kumquat grows and bears fruit from Liguria to Sicily along the entire Tyrrhenian coast. For its cultivation it requires hot summers, from 25 ° C to 38 ° C, but it can withstand very low temperatures up to -10 ° C without problems.
The kumquat, due to its size, is ideal to be grown in the home, even in pots. Moreover, not being as delicate as other citrus fruits, it can be planted anywhere, not just in the South. Despite its size, it can be very productive; in fact a few plants are enough to obtain many fruits that are directly edible even with the peel. Various varieties fall under the name of kumquat. For details of the cultivation technique, the following sheet can be consulted.

Uses and Traditions –
The Citrus japonica is reported in documents and descriptions since the twelfth century. Later this species was described in 1780 by Carl Peter Thunberg as Citrus japonica. In 1915, Walter Swingle reclassified it into a genre in its own right, Fortunella, named in honor of the British botanist Robert Fortune (1812-1880). In addition to Fortunella japonica, within the genus Fortunella have long been recognized several species (F. margarita, F. crassifolia, F. hindsii, F. obovata). The hybrids between the kumquat and the other Citrus species (the best known of which is the calamondino (Citrus x microcarpa) were attributed to the genus Citrofortunella. In recent times, detailed studies have questioned the separation from the Citrus genus and even the individual species have been reclassified as mere varieties of Citrus japonica, except for the species Fortunella polyandra segregated in the genus Clymenia.
Kumquat is a citrus rich in essential oils, useful for the immune system, the respiratory tract and the nervous system. This fruit contains 71 kcal per 100 g. Furthermore, 100 g of product contain on average: Greases 0.9 g, Cholesterol 0 mg, Sodium 10 mg, Potassium 186 mg, Fibers 7 g, Sugar 9 g and Proteins 1.9 g.
Kumquat also contains essential oils; the main oil is absolute limonene, followed by alpha-pinene, alpha-bergamotene, alpha-muurolene, alpha and beta-caryophyllene and various carbonyl compounds and terpenoids (such as citronellol or nerol) which give the fruit its unique taste. Thanks to this unique richness in nature (some of these compounds are extremely rare in natural organic substances), kumquat has numerous properties: antimicrobial and antibacterial, anti-inflammatory, antitumor; it is excellent against pathogens that attack the skin, strongly antioxidant thanks to vitamin C and numerous bioactive phenols.
In addition to being very rich in vitamin C, it also contains pantothenic acid, riboflavin and folic acid. It is also a good source of trace elements, especially iron, manganese and calcium.