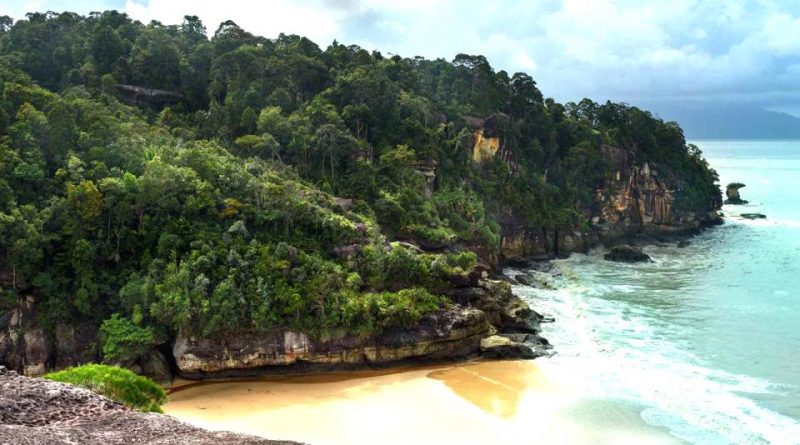 Bako National Park
The Bako National Park was inaugurated in 1957 and is Sarawak’s oldest national park. Sarawak (jawi: سراواك) is one of the three Malaysian territories that make up the Malaysian part of the island of Borneo. It is located in the northwestern part of the island, where it borders the Kalimantan (Indonesia) to the south, southeast and the Sultanate of Brunei in addition to the Malay state of Sabah, to the north-east.
The National Park is named after Bako, a fishing village located about 40 km north of Kuching. The Bako National Park, located less than half an hour’s drive from the capital of Sarawak, is known for its extraordinary variety of landscapes and its rainforest rich in wildlife.
The Bako National Park covers an area of ​​27.27 square kilometers, which qualifies it as the smallest park in Borneo.
Despite its modest extension, the Bako National Park has almost every type of vegetation typical of Borneo; in it we find 25 different forms of floristic-vegetational environment, including the maritime, reef, mangrove, diptero-carpi forest, swamp and rain forest, where the plant most coveted by all visitors is the carnivorous “Nepenthes”, which in the park there are different sizes and shapes.
The best way to explore Bako is through the dense network of trails that lead from one ecosystem to another.
For wildlife lovers, Bako is the only national park near Kuching that allows animals to be spotted in their natural environment; in fact, there are different species in the wildlife path, all very wary and forbidden to give them any food.

To spot the fauna the best moments are immediately after dawn and just before sunset, when the animals are in their most active phase of the day.
The Bako National Park is also the habitat of the proboscis monkey, a species of endemic primates in Borneo. These monkeys with a huge pendulous nose and a swollen, round belly are the largest primates in the park and weigh over 20 kilograms. To spot these monkeys the best paths are those of Telok Delima, Telok Assam and Telok Paku. The largest mammal in the park is the bearded boar, which generally wanders around the cafeteria in search of food.
As for reptiles, the biggest lizard in the park is the water monitor that is around 2 meters in length. The monitor lizards live in mangrove forests and on beaches and during the hottest hours of the day they can be spotted while they sleep on tree branches. Seagulls feed on carrion and occasionally live prey, but they are not a danger to visitors. The green crested lizards are among the most common in the park, while flying lizards are only occasionally seen as they glide from tree to tree.
The Bako National Park is an ideal habitat for many snakes, most of which are harmless. They are difficult to see because they can camouflage well in the vegetation and the first vibration they slip away. Among the most common snakes we remember the green snake whip which is easily recognized for its bright color and subtle body, and the flying serpent of paradise that lives on trees. The poisonous snake that is spotted most frequently is the green wagler viper, recognizable by its characteristic flat, wide and triangular head.
But the Bako National Park is an equally fascinating place for bird watching, as there are over 150 species of birds. To appreciate the variety of avifauna it is advisable to take a walk early in the morning along the paths of the park. The best place for birdwatching is the Telok Assam mangrove forest.
Among the nocturnal creatures of Bako is the flying lemur also called colugo, the pangolin, the trago deer-mouse, the bats fox, the slow loris, the tarsier spectrum and the civet of the palms.
The Bako National Park is also famous for its paths that run through the entire park; from the easiest and most flat ones for relaxing walks, to the most difficult and adventurous routes. In all there are 16 paths with very different characteristics and connotations; let’s see what they are:

– Tanjung Sapi is a short but steep 30-minute climb that leads to a cliff. This trail offers beautiful panoramic views and is occasionally frequented by proboscis monkeys;
– Telok Paku is a path of about an hour through the cliffs of the park until you reach a small secluded beach. It is one of the best routes to see proboscis monkeys who usually attend this area early in the morning or late afternoon;
– The Ulu Assam trail crosses a swamp that is generally frequented by proboscis monkeys. After the flat part of the swamp, the trail climbs steeply up to the top of a hill, which offers a breathtaking view of the coast of Bako;
– Telok Delima is another great way to spot proboscis monkeys and is only 45 minutes from the park entrance.
– The Serait is a journey of about an hour that leads to the border of the park. It is not very popular because it remains secluded but it is definitely a great path where you can see some gigantic rainforest trees;
– The Telok Pandan Kecil Trail is one of the most popular in Bako. For about an hour and a half, you venture on the hills of the park until you reach a plateau and then continue along a stretch of sandy path lined with carnivorous nepenthes plants, until you reach a cliff that offers a panoramic view of the bay, where it is located one of the most beautiful beaches in the park;
– Lintang is a very popular path as it crosses 4 different ecosystems. The entire route takes between 3 and 4 hours, so it is the best choice for those who visit the Bako park during the day;
– The Tajor Trail crosses stretches of tropical forest and ends with a steep descent leading to a hidden beach. This trail also passes by a small waterfall, the ideal place to relax in the cool. It takes about two and a half hours to reach the waterfall from the park entrance;
– The Tanjung Rhu is a branch of the Tajor that leads to a rocky peninsula and a small promontory from where you can see some rock pools. From the park’s entrance there are about 2 and a half hours of walking to reach Tanjung Rhu;
– The Uli Serait connects the Lintang trail with the Bukit Gondol hill. It is located within the park and passes through the rainforest and the marshes. From the Lintang crossing at the base of the hill there is an hour and a half walk;
– The Bukit Gondol trail leads to the highest point of Bako Park, 260 meters above sea level. From the top of the hill you can admire an excellent panoramic view. The route in total takes about 45 minutes of walking;
– The Paya Jelutong is instead a shortcut to avoid climbing the hill. Although it is a very short route, it offers the opportunity to see the tropical forest and the Bako marshes. The species of trees that dominate this area is the “Jelutong” whose wood is used to make pencils, and from which the latex used to make chewing gum is extracted;
– Bukit Keruing is a path that connects Bukit Gondol with Tajor where there are some giant rainforest trees. It passes along the slopes of Bukit Keruing, the second highest point of Bako;
– The Telok Sibur requires at least a 3 and a half hours walk from the Tajor waterfall to the mangrove forest to the longest beach in Bako;
– The Telok Limanu is a long path of at least six, seven hours walk from the park entrance leading to a small beach. The trail traverses stretches of rainforest, streams and a series of hills with panoramic views of the entire peninsula. You can also take the route in two days, subject to authorization from the rangers to stay overnight in a tent at the beach;

– Finally the Telok Kruin route which is quite far from the entrance to the park and is rarely used. This trail passes through the mangroves and other stretches of forest where you can find some species of carnivorous plants and ends at a beautiful deserted beach.
To visit also the small island of Pulau Lakei, on the north-eastern tip of the Bako peninsula, has a lovely white sand beach and a clear sea ideal for swimming. On the highest point of the island, which is reached by a wooden ladder, there is the tomb of the legendary Malaysian warrior Datuk Ibrahim who was considered so strong that he had carved some sacred verses on the rock pool with his bare hands. The island’s natural pool is frequented by locals because they believe its waters have spiritual and healing powers. Inside the island the Pa’Amit is the only path that leads to two panoramic points where you can admire the sunset on Mount Santubong.