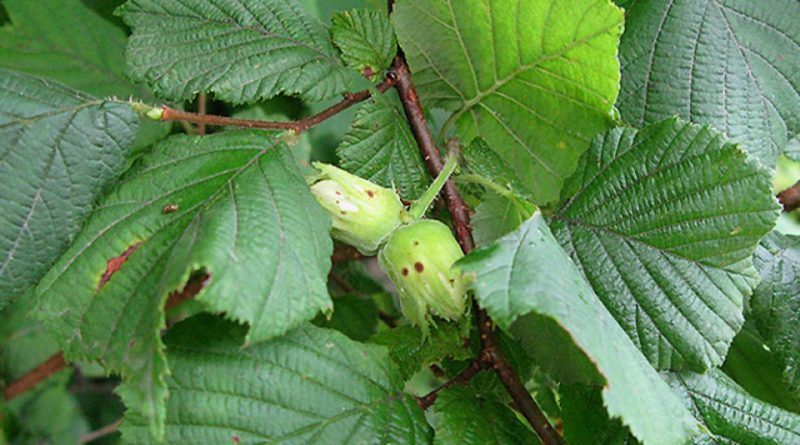 The hazel (Corylus avellana L., 1753) is a fruit tree species of the Betulaceae family.

Systematic –
From a systematic point of view it belongs to the Domain Eukaryota, Kingdom Plantae, Subarign Tracheobionta, Superdivisione Spermatophyta, Magnoliophyta Division, Magnoliopsida Class, Subclass Hamamelidae, Order Fagales, Family Betulaceae, Subfamily Coryloideae and then to the Genus Corylus and to the Species C. avellana.
The term Corylus sylvestris Salisb is synonymous.

Etymology –
The term Corylus comes from the Greek κόρυς córys elmo, probably due to the shape of the cupula. The specific epithet of Avellana derives from Abella Avella, Vecchia (AV), a city in Campania north of Nola, anciently renowned for its hazelnuts: nux abellana or avellana in Plinio.

Geographic Distribution and Habitat –
The Corylus avellana is a species native to the Asian regions. Its natural geographic area is European-Caucasian, ranging from the Iberian Peninsula and England to the Volga, and from Sweden to Sicily. In Italy it is widespread in all regions, from sea level up to 1300 m altitude.
Its habitat is that of the hilly or middle-mountainous plan, as it shuns the warmer and arid Mediterranean areas where it can constitute broad-leaved woods, especially mesophilic mixed oak woods, clearings and margins. It can form pioneer woods on stony fresh soil, in association with maples or aspen. 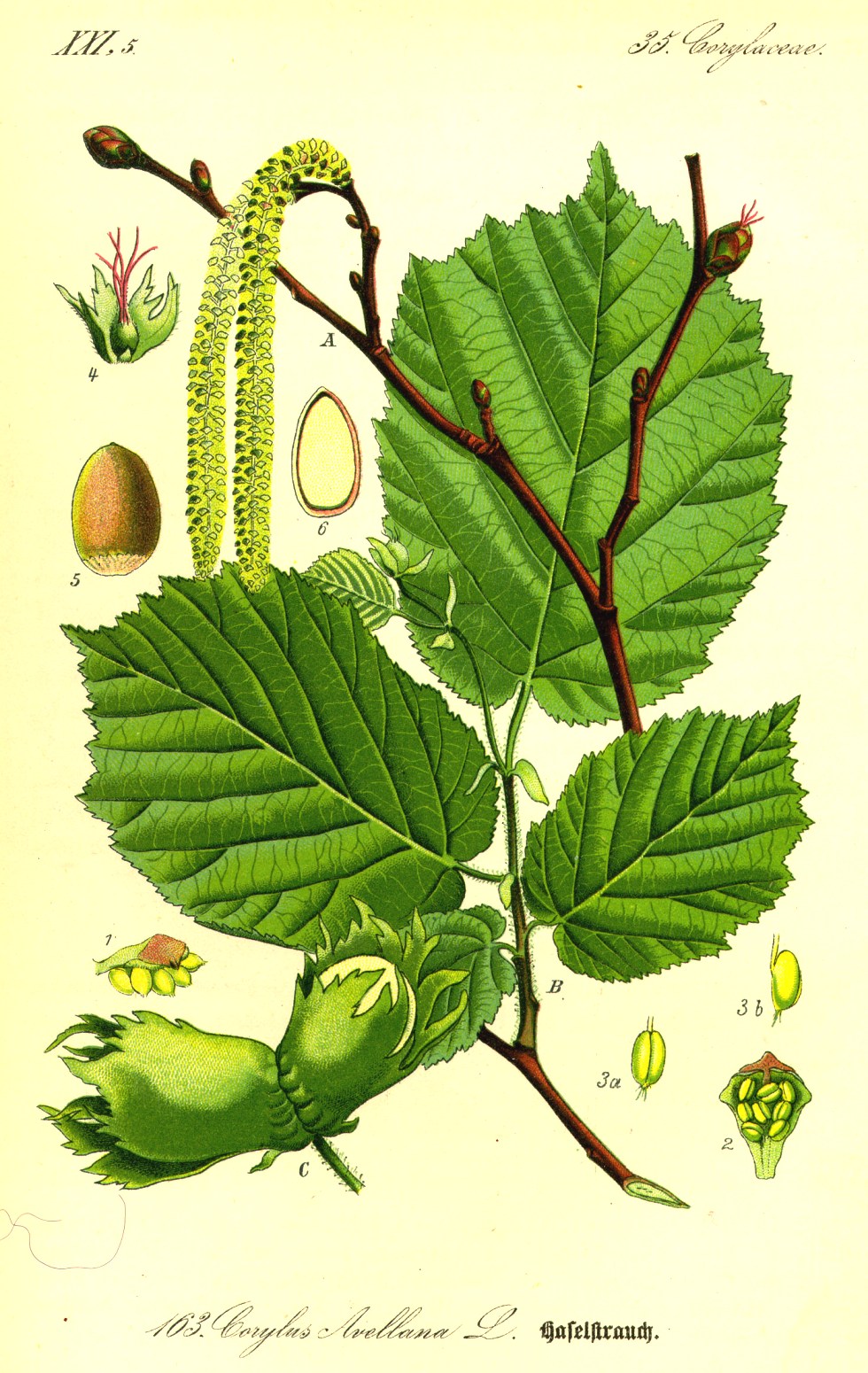 Description –
The hazel is a tree that generally does not exceed 5-6 m, with shrubby habit, with a thick, wide, irregular crown and a maximum diameter of 4 m. it has a trunk that is thin and slender with the young branches that bear short, partly glandular hairs and with the gray brown bark, precociously glabrous, with longitudinal grooves and scattered clear lenticels.
It has deciduous leaves, alternate and with long petiole provided with glandular hairs, with a round to obovate lamina, of 6-10 cm; the upper page is a little hairy green color, while the lower one is lighter and with evident ribs. The gems are ovoid. It is a monoecious plant, with flowers gathered in unisexual inflorescences that develop long before the leaves. The male catkins are grouped in groups of 2-4 at the extremity or at the axil of the leaves of the branches of the previous year, the male flowers are devoid of the wrapper and have four stamina. The fruit is a diclesio (hazelnut and casing), whose woody pericarpio contains a sweet and oily seed.
It is a plant with high pollon capacity.

Cultivation –
Corylus avellana is a plant that prefers calcareous, well drained, fertile and deep soils and semi-shaded places. It is a colonizing plant that, having modest requirements in terms of land and climate, adapts to various environmental conditions. In Italy, the second world producer after Turkey, the core is intensively cultivated mainly in a few areas. Among the cultivated varieties we have numerous fruit and ornamental varieties: among these we remember the pendula variety, the twisted variety, with a tortuous habit, and the fusco-rubra variety with purple leaves. For details of the cultivation technique refer to the following sheet.

Uses and Traditions –
The fruit of the hazel (hazel) is one of the wild fruits of which man has discovered the nutritional value since ancient times. This plant, which was much appreciated by the Greeks, was then also recommended by Cato, who advised its cultivation in the vegetable gardens of ancient Rome. Plinius claimed that these fruits caused not only headaches and flutations but also a fattening of the body, but that if they were toasted they would cure a sore throat. Judging from what we read in classical poets, the Mediterranean regions had to be rich in hazels, because there are many shepherds or nymphs who raise laments of love while sitting under its shadow. In addition, according to some sources, the ancient Romans gave hazelnuts to wish wellbeing and happiness, especially on official occasions and during ceremonies, while in France, in the era of the Ancien Régime, they were used to give them to the spouses as a symbol of fertility.
Since ancient times, hazel wood was considered the safest defense against snakes or anything that crawled, and for this the shepherds used it to build the stick.
In the Middle Ages, hazel twigs were used both to make pacts with the demon, and to cure epilepsy (it was enough to hang a hazelnut shell in which a spider was held prisoner). A branch of this tree, cut with a knife never used, was used by magicians to summon the dead, and is still used by dowsers to locate a source of water.
In Italy the cultivation of the hazelnut is developed almost everywhere in the hilly areas, and its fruits are used in many recipes of traditional sweets. It is generally cultivated for fruit. A particular productive aspect of this plant is mycorrhization with truffles: in fact, the hazel, like other plants, is one of the species favored by white truffles (Tuber magnatum) and the truffle neo (Tuber melanosporum).
The hazelnuts, with a high caloric value, are very rich in polyunsaturated fatty acids which exert a cholesterol reduction action in the blood; contain fiber, useful to improve intestinal transit, and vitamins and minerals important for our well-being. In addition, hazelnuts extract an oil with very precious emollient, soothing, antioxidant and astringent properties. In addition, the leaves of the pit contain phenols and flavonoids that act both on the swelling and as a tonic of the veins and also as anti-inflammatory.
The oil of the fruit of hazelnuts has a high content of unsaturated lipids, so it easily penetrates the skin without greasing, for this reason it can be used as a cosmetic in creams or oils for the skin.

Preparation Mode –
In the kitchen hazelnuts are used both in the creation of savory dishes and in desserts. Depending on the preparations they are used whole or minced in grain, natural or lightly toasted. Once the shell has cracked with a nutcracker, it is necessary to remove the thin brown film that wraps the fruit: to facilitate the operation, just heat the hazelnuts in the oven for a few minutes, at a low temperature, and the skin will come away more easily.
In Italy hazelnut is known as the main ingredient of Nutella and all chocolate-based spreads, but it is also used in the preparation of nougat, crunchy, biscuits and pastries, such as the Piedmontese kisses and the ugly but good viterbesi . Moreover, in the provinces of Asti and Cuneo, where the Tonda Gentile delle Langhe is grown, and in the province of Viterbo, where we find the Tonda Gentile Romana, hazelnut is the main ingredient of many other rustic desserts.
The hazelnuts can be found on the market with or without shells, whole or ground, natural, toasted or salted and storage times are typical of dried fruit: with the shell they resist about three months, while toasted and frozen they are kept until one year .
Thanks to its strong but delicate aroma, the hazelnut confers an intense and persistent aroma to the preparations. It can be eaten alone, together with yogurt or fresh fruit, or it can be used to flavor sauces made with butter, to prepare ice creams, semifreddos, puddings, creams, sweets of various kinds and cakes (they are very well linked to chocolate, both melting and milk, and cereals), but also to embellish and decorate salads, some second courses of meat (especially pork or veal) and fish.
Be careful, however, because the presence of hazelnut fruit, even in traces, by law, should be indicated in food labels, in order to avoid possible food allergies.