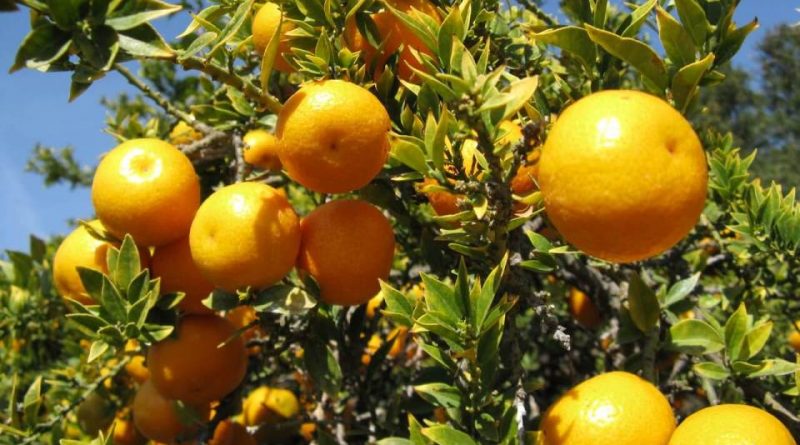 Systematic –
From the systematic point of view it belongs to the Domain Eukaryota, Kingdom Plantae, Magnoliophyta Division, Magnoliopsida Class, Sottoclasse Rosidae, Order Sapindales, Family Rutaceae, Subfamily Aurantioideae, Tribe Citreae and then to the Genus Citrus and to the Specie C. myrtifolia.

Etymology –
The term Citrus derives from the Latin name of the cedar and lemon, from the Greek Greek κέδρος kédros cedar and κίτρον kítron lemon. The specific myrtifolia epiteo comes from the genitive of the genus Myrtus (which in turn derives from the Greek μύρτος mýrtos myrto, and this from μύρω mýro stillare, moan) and from folium leaf: with myrtle leaves. The common name of Myrtle-leaved orange tree would have to do with the presumed provenance from China.

Geographic Distribution and Habitat –
Myrtle-leaved orange tree has an unspecified origin. According to some authors, it is a gemmary mutation in the Mediterranean area of ​​bitter orange (Citrus aurantium) which over time has developed into the species known today. According to others, the chinotto owes its name to China, a place from which it would have been imported in the late 16th century or early 1600s by a Livornese or Savona area. The cultivation of Myrtle-leaved orange tree, outside Italy (Liguria, Tuscany, Sicily and Calabria), is limited to the French Côte d’Azur. 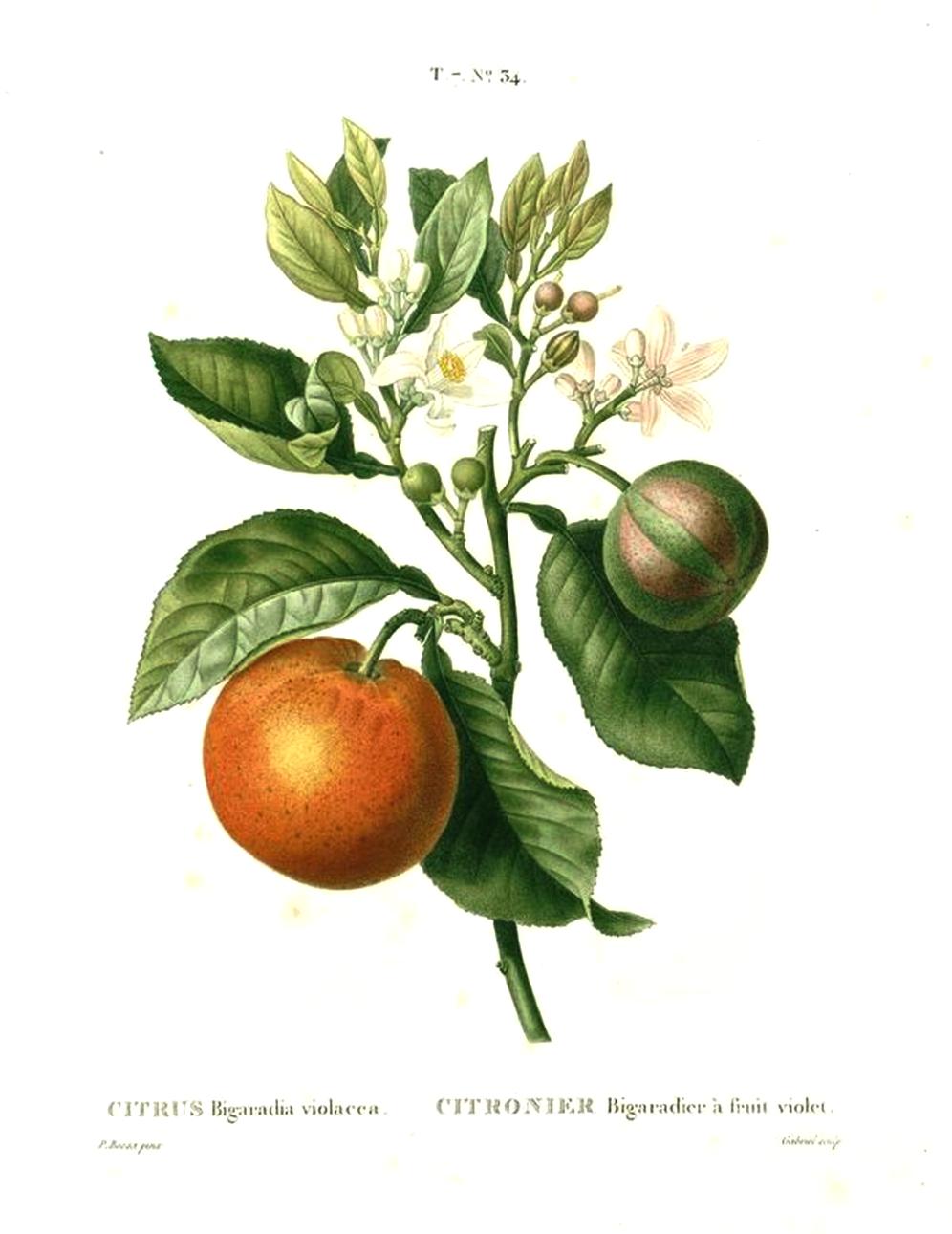 Description –
Citrus × myrtifolia is an arboreal species of small cut that can reach three meters in height, with compact foliage, slow growth and, unlike other citrus fruits, without thorns. The leaves are reminiscent of the Myrtle (from which the specific epithet) and are small, elliptic, pointed, leathery and bright green. The flowers are small, white, very fragrant, solitary or grouped together in an axillary or terminal position. The fruits of this citrus are small in size and are crushed at both ends; when ripe, they are intense orange. The pulp is bitter and sour and divided into 8-10 segments.

Cultivation –
Quinotto is a citrus fruit that is particularly sensitive to the cold but does not like excessive heat, the ideal temperature is between 18 and 32 ° C, and it does not absolutely stand below zero. The plant wants sunny and sheltered positions from the winds, on loose soil, of medium texture, fertile, deep, well drained; he does not like clay soils because he is sensitive to water stagnation. It is planted in March, after fertilizing the planting hole with mature manure. Irrigation should be taken care of, especially in the early years during the summer. The fertilization is done in winter every year with mature manure or other organic product. The form of ordinary rearing is a full-bodied globe, with the branches inserted on the stem at 40-50 cm from the ground (30-40 cm for potted specimens). Pruning should be done every year at the end of winter (March) to eliminate the set of crowded twigs, leaving only those well spaced and directed in order to let the air circulate in the plant. The suckers (branches that start directly from the base), the dry branches and the sick ones are also eliminated. As for the rootstocks used, the bitter orange is used, suitable for loose soils, sandy-loamy, moderately clayey and well drained, resistant to frost but susceptible to bad dryness; and the trifoliate orange, which loves medium-textured soils, does not like limestone, withstands frost and dry matter, and is used for plants grown in pots. For details of the cultivation technique, the following sheet can be consulted.

Uses and Traditions –
Citrus × myrtifolia had a certain use in Europe, between the end of 1800 and until 1918, for an extensive use of the immature fruits (1-2.5 cm of diameter), partially treated to reduce the bitter taste and syrupy in solutions sugar; these fruits were consumed together with alcoholic beverages (like the wines of the absinthe), as an aperitif; today the product in syrup is still on sale.
Between the nineteenth and early twentieth century the production of chinotto was so important, that in 1902 it felt the need to draw up a “Statute-Regulations” of the Chinotti Producers’ Society, which on July 10th 1887 had 152 members, among which stand out names that have made the history of the agriculture of Savona and the transformation of products. Being a product intended for candying, the sale of chinotti has always been subject to the rule of the caliber: they must therefore have a predetermined diameter that was measured by passing the fruits inside rings different in size.
The late nineteenth century is the golden period of its diffusion: it was successfully marketed in France and England, preserved in the Maraschino and served in the most fashionable cafés. In this period the agricultural production can not keep up with the industry: in the cosmographic description the abbot Cougnet cites a decline in the export of fresh chinotti following the installation in Savona, in the Oltreletimbro area, of the steam plant Silvestre-Allemand, specialized in the processing of chinotti. The size of the factory is important as shown by the number of workers employed: 60 in the opening year (1877) and already 80 in the following year.
The major export markets were France and the United Kingdom, where the chinotto had a double meaning: a product for gastronomy but also a medicinal source of vitamin C for sailors and ocean navigators who needed to fight scurvy.
In the fifties due to a series of frosts, the cultivation of chinotto, flourishing for decades, suffered a strong setback. Not only that: in the same years the most profitable greenhouse cultivations spread that in a few years led to a drastic reduction of the plantations. The major problems for the diffusion of this plant came however from the growth of urbanization. The chinotto, also used to delimit the boundaries between the properties, was cultivated within the city, in an area now completely built.
Nowadays, due to its importance, the Chinotto di Savona is a Slow Food Presidium and, given the risk of extinction of the plant, since 2014 the Municipality of Quiliano has started an extensive planting operation at the San Pietro Park. in Carpignano.
The most famous cultivar is the Chinotto Piccolo, also used for ornamental purposes. Other varieties are the Chinotto Grande, the Chinotto Crispifolia and the Chinotto with boxwood leaves.
The small bitter fruits of the chinotto are traditionally used to make jams, candied fruit and syrups, liqueurs, mustards and the classic drink.
Chinotto juice is component in many digestive and bitter drinks. Most of it is still used for the production of the homonymous drink, known in Italy as chinotto and in Malta as kinnie.
From a nutritional point of view, the quinotto boasts a unique concentration of vitamin C and a high percentage of synephrine, which helps the motility of the intestine. Also considered a panacea for circulation, it seems able to give a feeling of widespread well-being.

Preparation Mode –
The fruits of the chinotto are not of immediate consumption, also because they are very bitter. They can be tasted after a particular processing: the first moment consists of the immersion for about three weeks in brine (once the sea water was used); the citrus fruits are then peeled by hand to remove the thin layer of peel containing the most bitter extracts and aromas. After a second immersion in brine, they must be tanned with successive boiling and in syrups with increasing concentration. Among its main uses there is of course the use for the preparation of the homonymous drink, but it can also be used to prepare candied fruit, jams and mustards, while the flowers and leaves also extract an oil particularly appreciated in perfumery.