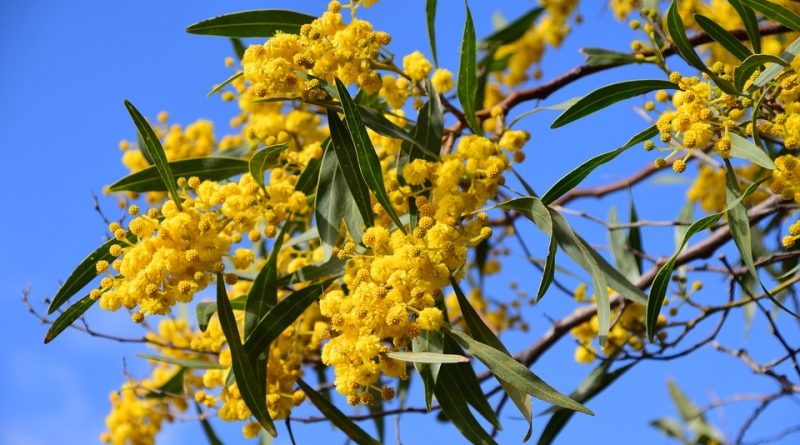 Mimosa (Acacia dealbata Link, 1822) is an arboreal species belonging to the Mimosaceae family

Systematic –
From a systematic point of view it belongs to the Eukaryota Domain, Kingdom Plantae, Magnoliophyta Division, Magnoliopsida Class, Fabales Order, Mimosaceae Family, Acacieae Tribe and then to the Acacia Genus and to the A. dealbata Species.

Etymology –
The term Acacia comes from the Greek name ακακια acacía (doubling of ακέ ακις acé acís needle, tip, thorn) with which Theophrastus and Dioscorides indicated a species of Egyptian Acacia. The specific dealbata epithet derives from deálbo, whitening: due to its dusty and whitish appearance.

Geographic Distribution and Habitat –
The Mimosa is a native species of the Tasmania region from where, due to its appreciated characteristics, as an ornamental plant, has had an easy development, starting from the nineteenth century, in Europe where it still thrives almost spontaneously. In Italy it is very developed along the Ligurian Riviera, in Tuscany and throughout the south, but also on the shores of the northern lakes. Its habitat is represented by fresh, well-drained, basically acid soils in areas with a temperate climate and mild winters, as temperatures that are prolonged below zero can cause their death. 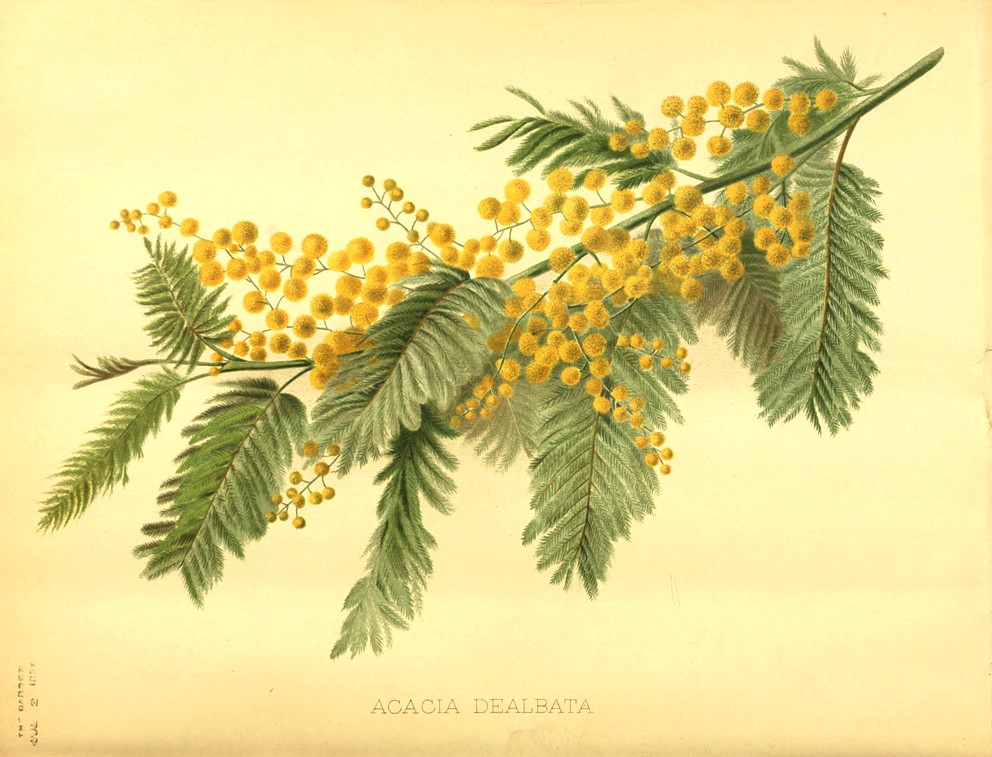 Description –
The Acacia dealbata is an arboreal species that can reach, in the areas of origin, the 30 meters of height, with light and alpine foliage. Crescendo, in the old specimens, takes on an umbrella-like appearance. It is characterized by having a flexible trunk, branchy at the top, with smooth, opaque, light gray-brown rind. The leaves are of a silvery green color (soft green in young twigs) and are arranged in 8-20 pairs of pinnules perpendicular to the sprig, composed in turn by about 20-30 pairs of leaflets.
The flowers are grouped in globose and spherical globs of golden yellow and fragrant, collected in racemes at the axils of the leaves. The antesis goes from winter to April. The fruit is a brownish-blackish subject composed of showy roundish overlapping articles.

Cultivation –
The Acacia dealbata, for its cultivation, needs a mild climate as it fears the frosts, especially if they are prolonged and of strong intensity. The substrate must be well drained but not stony or sandy; the plant prefers an organic soil, on average stony, which guarantees the rapid flow of water.
The mimosa should be pruned regularly after flowering (especially if grown in pots) to prevent the shrub from emptying in the inner part to have an excessive development; moreover it needs regular and frequent irrigations, which keep the soil always slightly damp; therefore from March to October the waterings will be very frequent, which will be intensified during the warmer months of the year. During the autumn and winter months, however, the waterings can be almost nil, although it is good to check the soil at the foot of the plant to prevent it from remaining dry for periods of time too prolonged.
As far as propagation is concerned, the Acacia dealbata is easily propagated by seed, while the cutting is not widely used due to the low rooting of the sheds. The graft that exploits seedlings of the congener Acacia retinoides is also widespread.

Uses and Traditions –
The Acacia dealbata is a very delicate plant that is appreciated for its abundant and colorful yellow bloom; for this reason it is cultivated in parks and gardens of temperate climates where it adapts well.
In the common language, the term mimosa is used to indicate, in addition to this, also other species belonging to the genus Acacia; in scientific language, this term refers instead to the genus Mimosa.
The peel can be used for the extraction of tannin, even if it is to be considered predominantly an ornamental species. The flowers, delicately scented, can be candied. Since 1946, on the initiative of the communist parliamentarian Teresa Mattei, in Italy the flowery branch of mimosa is offered to women on March 8th for the International Women’s Day.
But why, among the many flowers, just the mimosa was chosen as a “gift doc” for this day? According to some, because near the factory burned in 1908, where the 129 workers of New York died (who were killed in a fire, while protesting for the unworthy working conditions to which they were subjected), a mimosa tree grew. However, the most accredited hypothesis is more historical than symbolic.
The Italians elected the mimosa “women’s plant”. In 1946, the U.D.I. (Unione Donne Italiane) was looking for a flower that could celebrate the first post-war Women’s Day. The choice was almost obligatory: mimosa is one of the few plants to be flowered at the beginning of March.

Preparation Mode –
The mimosa flower is edible and therefore can be used in the double value of color and food. Some among the guests will tend to discard in every way the flowers present on our preparations whether they are stuffed eggs or cakes.
The fritters of mimosa flowers are the most classic preparation. Also appreciated by those initially skeptical, the fritters of flowers combine in a happy combination flavor and beauty. Flowers should be collected from plants away from roads or other sources of pollution. They are deprived of the “rametto” and are immersed in a batter for fried made with flour, not bitter and pale beer. The mixture should be poured into boiling oil in spoonfuls. They are accompanied with soft but tasty cheese, in thin slices and / or honey, and a lively white wine, but also sunny or sprinkled with powdered sugar.