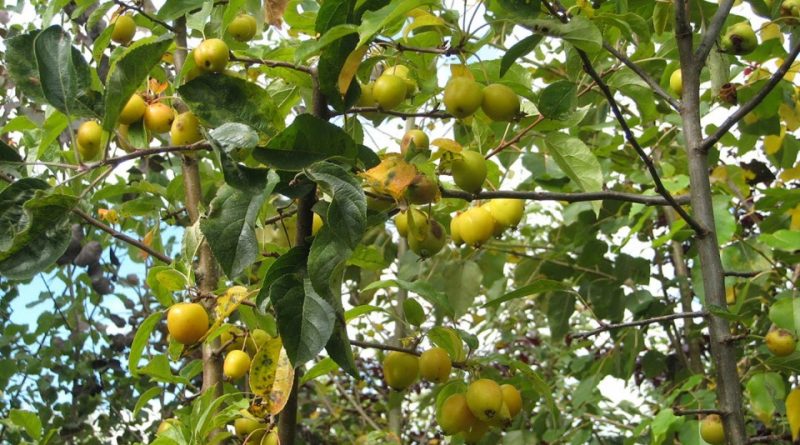 The wild apple (Malus sylvestris Mill., 1768) is an arboreal species belonging to the Rosaceae family.

Systematic –
From the systematic point of view it belongs to the Domain Eukaryota, Kingdom Plantae, Subarign Tracheobionta, Superdivisione Spermatophyta, Magnoliophyta Division, Magnoliopsida Class, Sottoclasse Rosidae, Order Rosales, Family Rosaceae, Subfamily Maloideae and then to the Genus Malus and to the SpecieM. Sylvestris.

Etymology –
The term Malus comes from malus which is the Latin name of the apple tree, mentioned by Varro and other authors. The specific epithet sylvestris comes from sylva selva, wood (Latin form less correct for silva), referring to species that grow in the woods, in the wild places.

Geographic Distribution and Habitat –
The wild apple tree is a plant native to the European continent and the Caucasus area, where it is part of the sub-thermophilous broad-leaved formations, consisting of oak, oak, English oak, hornbeam, etc., of the hilly and sub-mountainous belt. In Italy we find it spontaneous and sporadic in almost all regions. Its habitat is represented by deciduous forests, both pure and mixed, with conifers, preferring marginal spaces or clearings, where it manages to expand the foliage into a globular shape; prefers sandy or loamy soils rich in humus and well drained; it tolerates well and almost demands harsh winter climates, although it suffers greatly for late frosts during flowering. From 0 to 800 (1400) m. It is a mesophilous and lucivan species. 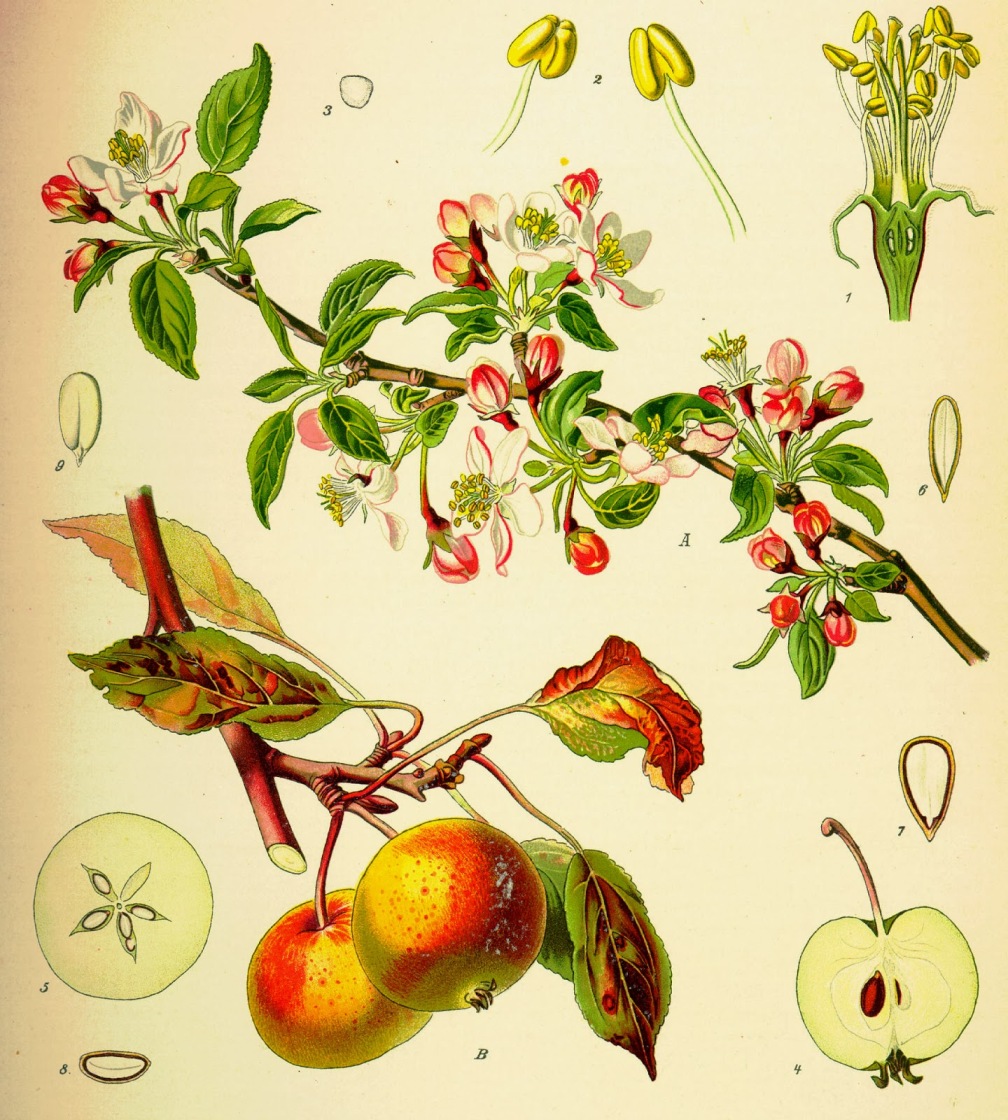 Description –
Malus sylvestris is a tree that can reach 10 meters in height, with dense and roundish foliage; its trunk is straight or a little sinuous, with a young peel that is light gray with reddish hues when young, while in the older specimens it is dark gray and fissured in irregular flakes that tend to peel. It has deciduous leaves, alternate, simple, petiolate, ovate with acute apex and rounded base, with the lower page of the same which has a certain hairiness that tends to disappear with the progress of the season.
The flowers are hermaphrodite and grouped in inflorescences with 3-7 terminal and erect flowers and have a corolla of 5 petals, white with pink hues. The fruit is a globose pome 2-4 cm broad, first green, then more or less reddened. The core (pericarp) contains some black and smooth seeds.

Cultivation –
The wild apple tree is a plant that being rustic does not fear at all the winter frosts, but it is damaged by the late frosts that damage the flowering. Vegeta optimally in stations that are not too humid nor too dry, usually as an isolated specimen in deciduous woods at the edge of clearings where it does not have to suffer due to lateral competition. The ideal soil where to grow must be sandy or silty, fertile and well drained, with a pH close to neutrality, but can also live on soils with alkaline or sub acid reaction, or even in periodically flooded stations, being a plant very adaptable to various substrates.
The propagation of wild Melo must be done by seed in spring after stratification during the winter months (alternating 2-4 weeks of summation to 12-16 of vernalization) or immediately after harvesting, in autumn, benefiting from the high percentages of germination. The seeds of wild apple have two types of dormancy, removed the first fact you must avoid to keep the bed for long periods at high temperatures (around 20 ° C) otherwise the seed falls into dormancy for the second time. This type of seeds in fact benefits once seeded by alternating high temperatures during the day and low during the night (as usually happens during spring). The vegetative propagation by layering of stumps and autoradication is used to produce clonal rootstocks on which to graft sweet apple varieties in difficult soils, even if in reality today the fruit apple tree is usually grafted on specific rootstocks according to the characteristics to be obtained and cultivation substrates.

Uses and Traditions –
Malus sylvestris is often confused with more or less inselvatichiti subjects of Malus domestica Borkh. (= Pyrus malus L., M. communis DC, M. sylvestris var. Mitis Wallr., Incl var. Tomentosa Koch et var. Dasyphylla Asch. Et Gr.); this (cultivated apple tree) is considered a hybrid form between M. sylvestris and species from the Near East, but many claim that the true ancestor of the cultivated apple is not M. sylvestris, but M. sieversii (Ledeb.) M. Roem., coming from Central Asia
In ancient mythology the legend of the apple tree is repeated many times, a sacred tree to Hera, bride of Zeus, which produces golden fruit, representing the symbol of salvific knowledge and immortality. The golden apple attributed by Paride to Aphrodite has also given rise to the emblem of feminine beauty and carnality. The concept of knowledge is also reflected in the biblical myth of original sin, committed by Adam and Eve in the Garden of Eden: the tree of life, whose fruits should not have been caught and eaten in disobedience to the Creator, has been interpreted and portrayed in the Christian Middle Ages like an apple tree, a symbol of good and evil.
Wild Melo is a very well known and appreciated plant since the origins of man, cultivated in numerous varieties for its nutritious fruits and rich in beneficial properties. Regarding the healing properties, in folk medicine apples are celebrated as remedies against phlegm, diabetes, dysentery, bilious dysfunctions, coughs, inflammations, infections, scurvy, warts and even tumors; other qualities that are recognized are: aperitifs, bactericidal, purifying, digestive, diuretic, refreshing and tonic. The seeds contain modest amounts of cyanide and can cause poisonings, even serious, if consumed in abundant doses.
The wood of the wild apple tree has a rosy sapwood and red-brown heartwood, compact and with a fine texture, even if less precious and durable than that of the pear tree, it was sometimes used for lathe and inlay work. The wild apple tree is used as rootstock for the cultivation of Malus domestica varieties and can be grown in gardens with a natural vocation, to attract biodiversity (it is a plant loved by bees and all pollinating insects) and to feed the local fauna with its otherwise unusable fruits, or to become part of mixed hedges (the presence of its thorns must be taken into account) together for example with wild pear, hawthorn, wild rowan, elderberry and so on. Moreover, due to its small size and the beautiful spring bloom, it is very suitable for small gardens, both as part of English borders and as an isolated specimen.

Preparation Mode –
The fruits of wild apple can be eaten fresh and dried, and can be transformed into jams, jellies, cider (apple wine), fruit juices, vinegars, distillates; they can also be cooked in various ways, candied and used in the preparation of various desserts.