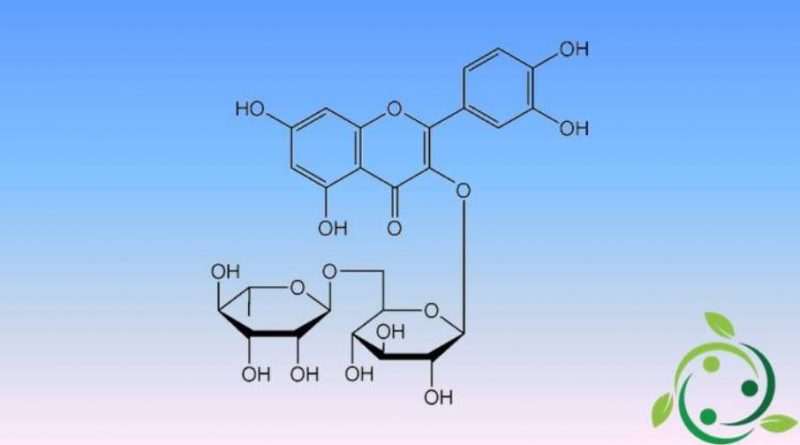 Rutin, whose brute or molecular formula is: C27H30O16 and whose name in the official IUPAC nomenclature is: 2- (3,4-dihydroxyphenyl) -5,7-dihydroxy-3 – [(2S, 3R, 4S, 5S, 6R) -3,4,5-trihydroxy-6 – [[(2R, 3R, 4R, 5R, 6S) -3,4,5-trihydroxy-6-methyl-oxan-2-yl] oxymethyl] oxan-2 yl] oxy-chromen-4-one. Chemically this glycoside is formed from the flavonol quercetin (aglycone) linked to the disaccharide rutinosio.
Rutin, also known as rutoside, is a flavonoid glycoside present in some plants of the genus Citrus, in buckwheat, in red wine, in peppermint, in eucalyptus, in leaves and petals of the genus Rheum and in other species. But the most exploited sources for their rutin content are the buds of Sophora japonica (15-20%), the leaves of Eucalyptus macrorhyncha (about 10%) and those of Fagopyrum esculentum (buckwheat, 5-8%). Among the commonly used foods, which are rich in rutin, are asparagus, citrus fruits (especially their rind) and berries such as blackberries and blueberries. In plants, rutin plays an important role as it is able to combine with cations allowing cells to receive and retain nutrients from the soil.

Rutin is sometimes called improperly vitamin P, to underline its great effectiveness in regulating the permeability of blood capillaries. It is no coincidence that the use of this glycoside is also used in medicinal specialties registered to maintain the physiological permeability and trophism of the capillaries; in particular conditions, such as hemorrhoids, the ability of rutin to act as antihaemorrhagic and anti-edema may therefore have an important therapeutic role. Rutin shares in this sense the same properties of Quercetin. Rutin is also included in a wide variety of supplements designed to promote cardiovascular health, for example in the presence of high cholesterol, obesity or reduced glucose tolerance.
Some studies have shown that rutin is able to act as chelating agent against the bivalent iron contained in hemoglobin, preventing radical reactions with hydroxyl and peroxyl ions, thus performing antioxidant function so it could play an important role in inhibiting training of some types of cancer.