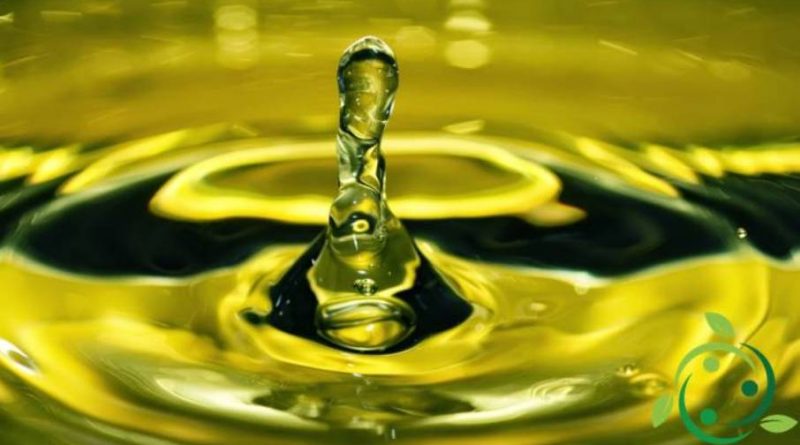 Hemp seed oil is obtained by extraction from the fruits of Cannabis sativa. The fruit Cannabis sativa is an achene which contains only one seed and which is commonly called grain and vulgar seed of hemp or canapuccia in the olive oil industry. It is recalled that the cultivation of hemp, both for the production of oil and textile fibers, is allowed in the EU for varieties of hemp that contain less than 0.2% of the main psychoactive component (Δ9-tetrahydrocannabinol).
Extraction can take place with different techniques, but since the yield is usually high, even greater than 30%, cold pressing is very widespread.
Hemp seed oil, obtained by cold pressing, has a more or less intense green color, while the refined one is very clear as it has lost most of the beneficial components. This oil has a more intense taste than that of linen. Because of the high content of polyunsaturated fatty acids, hemp oil easily deteriorates to light and heat, so it should be kept in a refrigerator in a dark glass bottle. Because of this characteristic, hemp oil is not suitable for cooking. In addition, hemp seed oil may appear to be a fairly intense green color if not refined. Depending on the amount of grain that is processed, it can contain from 5 to 80 ppm of chlorophyll.
In hemp seed oil the level of THC (tetrahydrocannabinol), the narcotic active substance of cannabis, is very low, standing at less than one part per million, so that to have psychotropic effects from this substance, it should be assumed from 5-9 liters per day. Up to now there have been no side effects resulting from the intake of hemp oil, but on the contrary, beneficial effects on health have been observed, both for children and adults, so as to be now recommended in prevention and in the treatment of diseases based is inflammatory.
Hemp seed oil is mainly composed of acylglycerides (triglycerides), a composition that can vary according to the cultivar, environmental conditions, harvesting and processing.
The two main fatty acids are: linoleic acid and α-linolenic acid, normally present at concentrations whereby the total polyunsaturated concentration reaches the order of magnitude of 80%.

Along with fish oil and flaxseed oil, hemp seed oil is one of the few plant sources of alpha linolenic acid. Hemp seed oil is known for its balanced relationship between omega-3 and omega-6: no other food in nature is able to guarantee a 3: 1 ratio, a ratio recommended by medical research and the most advanced nutritionist theories .
In hemp seed oil there are also significant amounts of amino acids, many vitamins, including A, E, B1, B2, PP, C; mineral salts such as iron, calcium, magnesium, potassium, phosphorus; phytosterols and cannabinoids (especially CBD, Cannabidiol) which according to the most recent medical-scientific acquisitions have an important modulation function with regard to the immune system and cognitive functions. Indeed, beneficial health effects have been reported, both for children and adults, in the prevention and treatment of diseases whose base is inflammatory.
As with all vegetable oils, for hemp seed oil, the quality of the seeds, the production technology and the conservation in a cool and dark environment are important in order to prevent oxidation and rancidity. In fact, due to the high content of polyunsaturates, it is particularly susceptible to oxidation and rancidity and for commercial use it may require the addition of antioxidants.
Hemp seed oil finds multiple uses and applications. It can in fact be used as a cosmetic ingredient, burned and used as a biofuel, used to season food or used as a drying agent for paints.
As for food use, hemp seed oil has a pleasant smell and taste. It can be used to season salads, pasta and fish and can replace other seed oils. It has a smoke point of 165 ° C and a relatively low stability so it is not recommended for frying.
Other uses of hemp seed oil are:
– in the cosmetic field; hemp seed oil has been given the name INCI: cannabis sativa seed oil and is mainly used as an emollient and conditioning agent;
– in the production of soaps, with a typical saponification number equal to 190-193, forming a softer and creamy soap with the potassium for the high concentration of polyunsaturates;

– in the motor and automotive sectors, as it can be used in some engine types, in particular Diesel engines. This oil, compared to other vegetable oils used as biodiesel, has the advantage of greater fluidity and the disadvantage of being able to cure;
– in the field of paint production; in this sector, due to the lower cost and higher drying power, it has been replaced by linseed oil.
Finally, it is recalled that from the flowers of the Cannabis sativa, an essential oil can also be extracted by means of solvent, an oleoresin called hashish oil, so that the common contraction in “hemp oil” can be ambiguous and misleading.