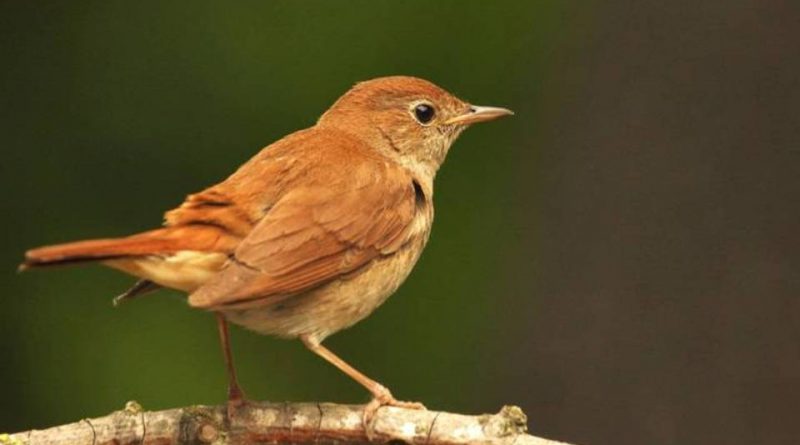 The common nightingale (Luscinia megarhynchos (Brehm, 1831)) is a passerine bird belonging to the Muscicapids family.

Geographic Distribution and Habitat –
The common nightingale is a migratory bird, common in Asia, Europe and North Africa. Nightingales living further north in central Europe winter in Africa. In Italy it is very common in the summer season; the cases of nightingales that winter in our peninsula are rare. The nightingale prefers to live normally in forests or wetlands, where he builds nests composed of foliage, moss and ears. The nightingale builds the nest on the ground. The bottom is composed of foliage, inside there are moss and ears. The female nightingale builds the nest by itself.

Description –
The adult specimen of the common nightingale measures from the beak to the tip of the tail about 17 cm. It has a color that varies from light brown to dark gray on the belly, while the back is brown and the tail is rust-colored. These characteristics make it similar to the Big Nightingale (Luscinia luscinia (Linnaeus, 1758)), which however presents shades that are more grayish.

Biology –
In the period from mid-May to mid-June, the Nightingale lays eggs – generally 4 or 6 – which are hatched by the female for 13 or 14 days. The chicks, which both parents take care of, leave the nest after 11 or 12 days, but continue to be treated for the next two weeks. In years characterized by particularly favorable climatic conditions, the broods can also be two.
The nightingale is also recognized for its song which is considered among the most beautiful and the most complex of songbirds and is composed of stanzas of single and double tones densely aligned with each other. It is interesting to know that the differences in the repertoires of learned verses make it possible to distinguish the area of ​​origin. The male of Usignolo sings to seduce the female, but also to point out its territory.
The song of these birds is influenced by the seasonal trend; at the beginning of the spring nightingales sing mostly at night until morning; in this period their song serves above all for the delimitation of the reserves and for the attraction of the females. When the spring is quite late the nightingales song can be heard clearly during the day. Luscinia megarhynchos learns to sing from early youth by direct contact with neighboring adult specimens.
These birds know between 120 and 260 different types of stanzas, which last for the last two to four seconds. The song of the nightingale is the object of research on the part of ethology above all for its complexity and for the function of memory.

Ecological role –
The nightingale feeds mainly on insects, worms or larvae and many other invertebrates, but in autumn their main nutrients are berries. Their presence is therefore also a source of containment of populations of some insects and, the use of pesticides and herbicides, reducing their populations has ended up unbalancing the ecological relationships between these birds and insects in favor of the latter (via of the greatest number of generations per year).
After the construction of the nest and the laying of the eggs, the time of hatching of these goes from mid-May to mid-June. Usually there is only one brood per year but if the weather conditions allow it there may also be two broods. The brood consists of 4 or 6 dark green eggs. Eggs are hatched by females for 13 or 14 days. The young are fed by both parents. After 11 or 12 days the young leave the nest but are still treated for 14 or 15 days.