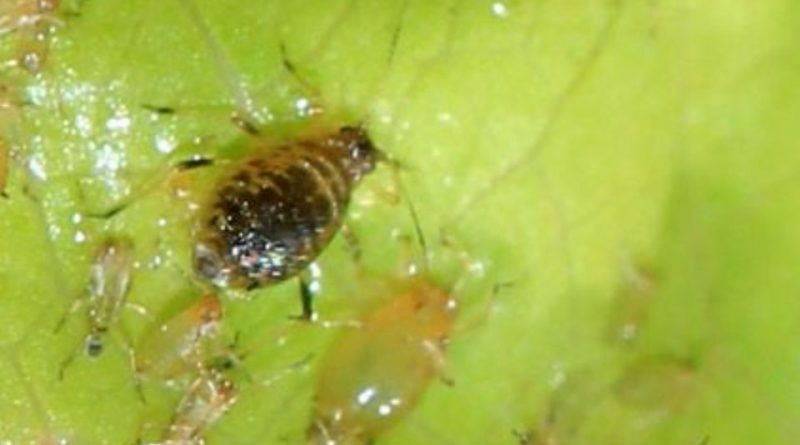 The brown peach aphid (Brachycaudus schwartzi (Börner)) is a brownish aphid of the Aphididae family.

Geographic Distribution and Habitat –
Brachycaudus schwartzi is an aphid present in the Mediterranean basin, Russia in India, South America, California, New Zealand. In the Middle East its presence has been reported since the beginning of the 90s.

Morphology –
The brown peach aphid is recognized because the females are yellow-brown, 1.6-2.0 mm long, with a dark brown abdomen. The winged females are mostly brown, with the exception of the yellow abdomen, with the length of the body is 1.5-1.9 mm. The Afide is brownish in color but with lighter nymphs.

Attitude and biological cycle –
Brown Afide performs a monoic and homotopic cycle on Peach; it overcomes winter, mainly at the egg stage, in the ravines of the rind, or as wintering females, in the natural shelters of the orchard. When the end of winter comes, the activity resumes very early, giving rise to several generations, always on the Pesco. For the techniques of containment of infestations, the following form can be consulted.

Ecological role –
The damage caused by the Brachycaudus schwartzi occurs on the leaves and on the young shoots, which show marked crumple, deformation and arrest or deviations of development; so there are interruptions in the development of the buds, with the consequence that the young infested fruit can fall. To this damage is added the abundant production of honeydew from the aphid with further biological consequences and depreciation of production. Massive damage is also found on plants in nurseries.
The brown aphid of peach is today the aphid that determines more pest infestations; moreover, due to its better development at lower temperatures, the varieties of peaches or nectarines at the beginning of the season are the most sensitive. This aphid can transmit the Plum pox virus (PPV), which causes shark disease, an important disease of peaches that, in Italy, has led to the compulsory eradication of infected fish.
Until now the Brachycaudus schwartzi was fought chemically with the use of phosphorganics but, in addition to the residues of these products on fruit, the agro-ecological consequences were worse than the provision. The infestation of this aphid, like others, has increased for some reasons:
– excessive cultivation specialization and lack of agro-ecological practices;
– use of nitric nitrogen, with consequent softening and greater palatability of the tissues;
– elimination of useful entomofauna;
– general balance of biocenosis in favor of the brown peach anisle.
Biological control is now possible by reversing these agricultural models and using specific predators, which can be increased directly or indirectly. Directly with specific pitches in the open field or indirectly creating suitable agrocoecological conditions: presence of dry stone walls; decrease in specialization, consociations, grassing, abandonment of chemistry in fertilization and treatments, etc.
Among the predators of Brachycaudus schwartzi we recall: some predators of the Cecidomyiidae families (such as Aphidoletes aphidomyza Rondani,) Coccinellidae (especially Scymnus (Pullus) argentinicus (Weise)) and Syrphidae (as Allograpta neotropica Curran), and endoparasitoids of the Aphidiidae family, such as Aphidius colemani Viereck. This aphid is also infected by the entomopathogenic fungus Erynia neoaphidis Remaudière and Hennebert. To date, however, the combined effect of these natural enemies on the parasite is not yet known.