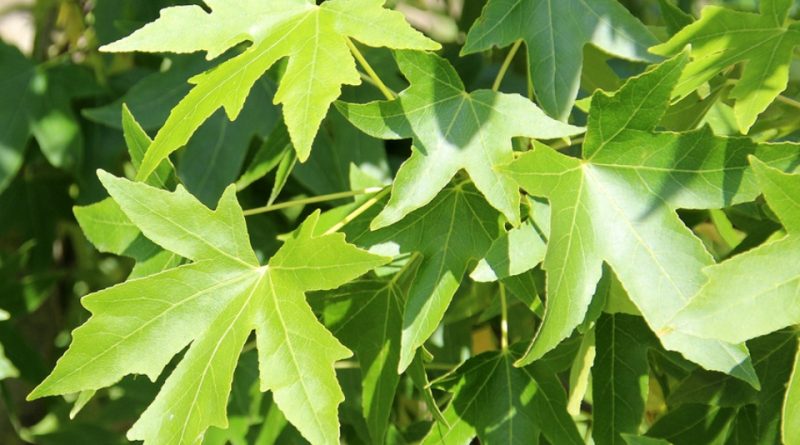 The American sturgeon (Liquidambar styraciflua L.) is an arboreal species belonging to the Altingiaceae family.

Systematics –
From a systematic point of view it belongs to the Eukaryota Domain, Kingdom Plantae, Magnoliophyta Division, Tracheobionta Subdivision, Magnoliopsida Class, Saxifragales Order, Altingiaceae Family and then to the Genus Liquidambar and to the L. styraciflua Species.

Etymology –
The term Liquidambar comes from the Latin liquidus, liquid and from the Arabic ambar amber: referring to the scented resin produced by the tree. The specific epithet styraciflua comes from the Greek styrax resin (for antonomasia from the genus Styrax from which an aromatic resin is extracted) and from φλύω phlúo trabocco: which overflows with resin.

Geographic Distribution and Habitat –
Liquidambar styraciflua is a tree native to eastern North America, with an area ranging from southern Canada to Florida and Mexico. Its habitat is that of fresh and mixed forests and was imported into Europe as an ornamental plant in 1681. 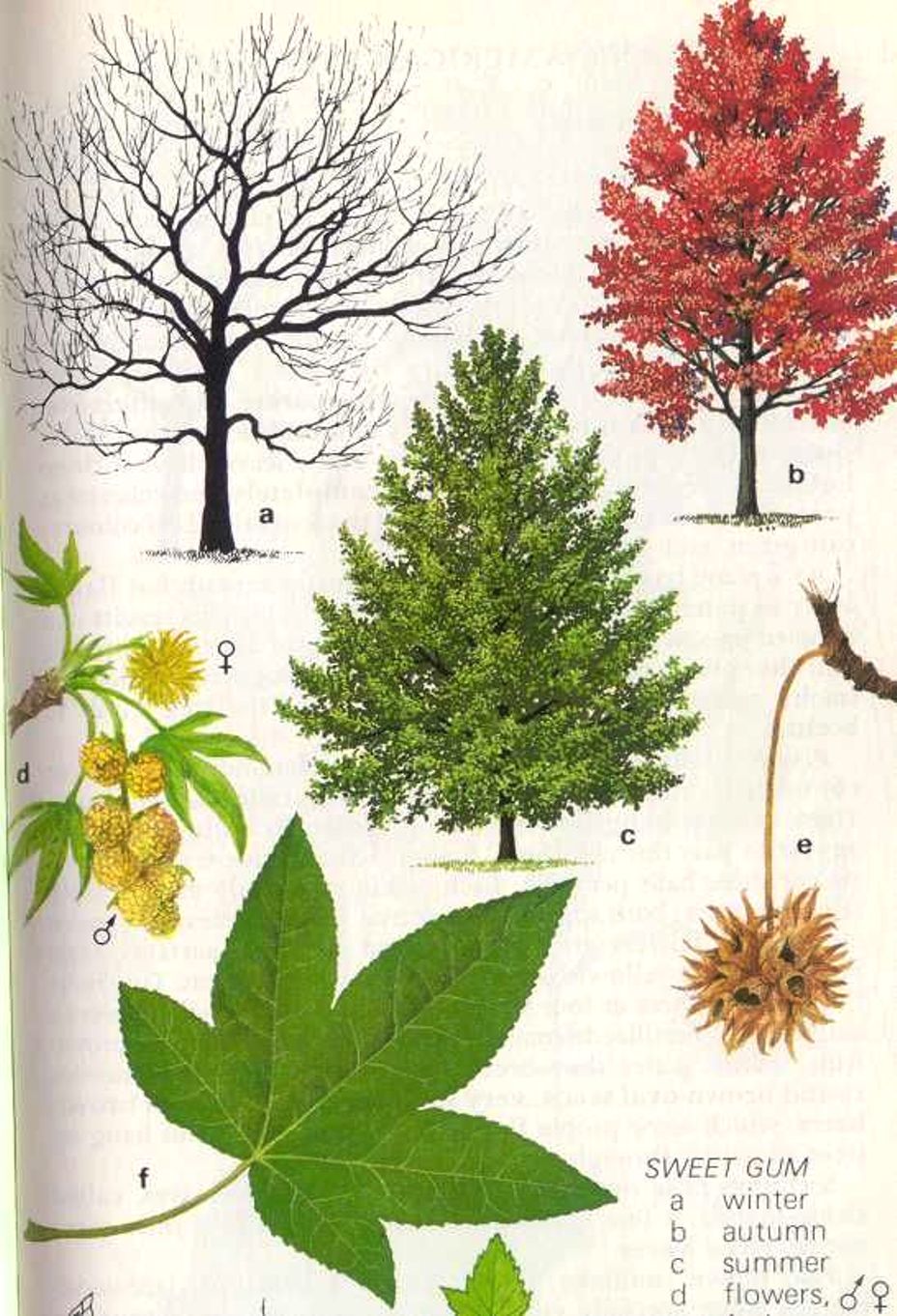 Description –
The American sturgeon is a medium-large tree, which in the area of ​​origin can reach 40 meters in height; has a trunk is straight and the crown, first slender, then becomes largely pyramidal. The rind is smooth and gray when young, then wrinkled and brownish. The leaves are palmate with 5-7 lobes, with bright green coloring that in autumn becomes purple, orange, yellow; they measure 12 cm in length and are serrated in the margin and sharp at the apex. It is a monoecious species with male flowers, yellowish, arranged in racemes at the end of the branches and female flowers isolated and supported by a long peduncle inserted at the base of the racemate. The antesis is between April and May.
The fruit is a woody capsule gathered in a globose infructescence. Each capsule contains 1 or 2 seeds. The infructescence, at first green, becomes woody and is spinescent due to the persistence of the styles.

Cultivation –
The Liquidambar styraciflua is a rustic and undemanding plant and should be planted in late autumn, remembering to give it enough space for future development. It prefers a very well drained, but constantly moist, fertile soil: in this case the plant develops better than on poor and dry soils. For the winter temperature there are no problems, as most of the cultivars of L. styraciflua resist well even up to – 15/18 ° C. The other species, however, do not tolerate temperatures below – 5 ° C. The most suitable exposure is that in full sun, but also the half-shade, keeping in mind the rule that the more intense the sunnier the more humid the ground must be. The use of irrigation is necessary when the plant has been planted recently, but it should be noted that the excess of water is at least as harmful as its lack. Winter pruning is essential only if you want to give the specimen a nice shape. The plant bears the transplant badly.

Uses and Traditions –
The first evidence of the presence of this tree seems to be in a Spanish work by F. Hernandez, published in 1651, in which he describes it as a large tree that produces a fragrant rubber similar to liquid amber, hence the name. The introduction in Europe of Liquidambar styraciflua dates back to 1681, by the missionary John Banister. The British naturalist John Ray, in his Historia Plantarum (1686) calls it the liquid Styrax species.
Already in the seventeenth century the Aztecs used the resin, or liquid amber, produced by this tree for medicinal purposes. The resin, which the natives called ococal was used against many diseases, but mainly to treat colds. In case of a toothache, they heated the resinous extract and placed it on the cheek. The use of this plant was also done by the English colonists of the southern colonies, perhaps because they had heard from the Spaniards.
Already by the end of the seventeenth century liquid amber was one of the most used remedies in North Carolina. According to some reports it seems that this scented resin was effective in the treatment of herpes and inflammations.
The American Indians chewed the resin to keep the teeth healthy; they also used it as a healing remedy for horses. According to a report from 1795, a French merchant at the Cherokee managed to recover from itching (scabia) by drinking for 10 days a decoction of copal or liquid amber extracted from Liquidambar.
Today Liquidambar styraciflua is used as an aromatic, stimulating, antiseptic, expectorant and anti-inflammatory herb.
For internal use against sore throat, cold cough, asthma, bronchitis, cystitis and vaginal discharge. For external use in cases of sores, hemorrhoids, trichofizia, scabies and freezing. It is a ingrediene of the so-called “Balsamo dei Frati”, prepared with benzoin, which mitigates colds and skin problems.
From the incision from the bark gushes a resin with the aroma of incense called improperly storace (since nothing has to do with the genus Styrax, apart from the similarity of the perfume), the liquid amber (hence the Spanish name of liquidambar ) used in perfumery, as a fixer, especially in perfumes with a jasmine note and as a flavoring of foods (chewing gum) and tobacco.
The wood of these plants, of mediocre quality, especially in its area of ​​origin, is used for veneers and for small containers; from the Chinese it is used to build the boxes for the conservation of tea.
This plant, in Europe and in other parts of the world, is widespread above all as ornamental. The very showy colors of the autumn foliage make the Liquidambar a sought after species to decorate parks and gardens.

Preparation Mode –
Liquidambar styraciflua is used as an aromatic, stimulating, antiseptic, expectorant and anti-inflammatory herb. The resin, or liquid amber, produced by this tree is used for medicinal purposes and is used in perfumery, as a fixer, especially in perfumes with a jasmine note and as a flavoring of foods.