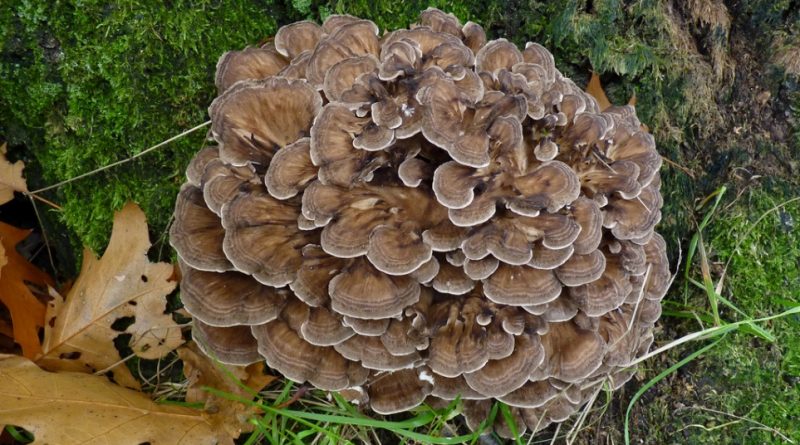 The Griffon or Royal Mushroom or better known as Maitake, which in Japanese means “dancing mushroom” (Grifola frondosa (Dicks.) Gray, 1821) is a fungus belonging to the family of the Meripilaceae.

Systematics –
From the systematic point of view it belongs to the Eukaryota Domain, Kingdom Fungi, Basidiomycota Division, Basidiomycetes Class, Order Polyporales, Family Meripilaceae and then to the Grifola Genus and to the Specie G. frondosa.
The terms are synonyms: Boletus frondosus Dicks. And Polyporus frondosus (Dicks.) Fr ..

Etymology –
The term Grifola comes from the Greek γρῖφος gríphos rete, interweaving of rushes: for the aspect of the hymenium, although some scholars believe that its name derives from the “Griffon” a mythological animal with head and wings of an eagle and hind legs and tail of a lion. The specific leafy epithet derives from the Latin “frondosus” = leafy, because of the carpophore that recalls the fronds of a plant.

Geographic Distribution and Habitat –
The Maitake is a fungus with an area of ​​origin in northeastern Japan, Europe, Asia and the eastern part of the North American continent. Parasitic and saprophytic mushroom, present in Italy in the Apennines, in the Piedmontese pre-Alps and the Sila. It is found in the period between late August, September and October and grows in broad-leaved woods, especially in the chopped chestnut strains where it occurs again, in the same place, in alternate years (every 2-4 years). However it is not a common mushroom. In recent decades, the cultivation technique has been developed, which is why it is now preferred to buy it on the market. 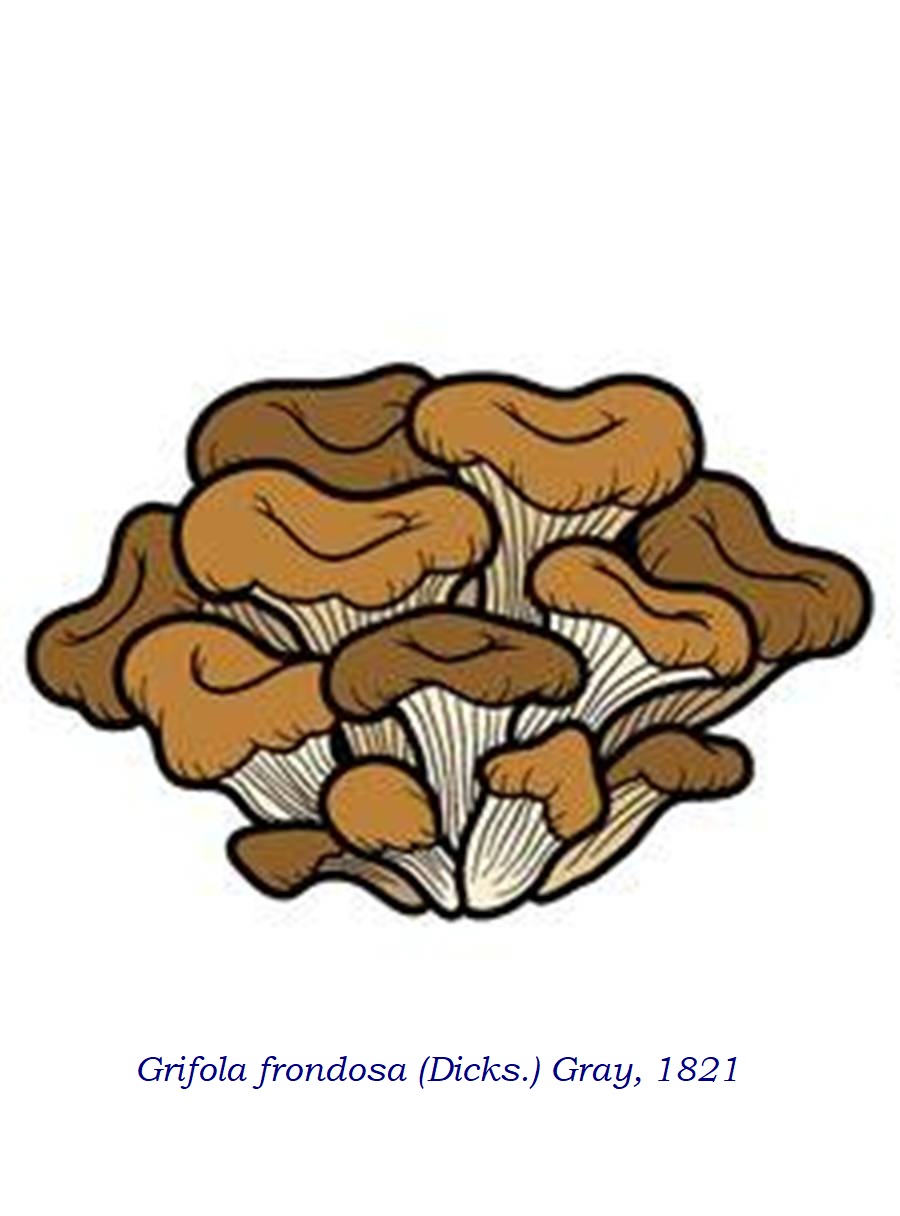 Recognition –
The leafy Grifola is recognized by a carpophore that can have dimensions up to 70 cm, branched to overlapping hats that form a fan of brown or grayish color, with wavy edge. You can find mushrooms weighing up to 15 kg. The tubules are short and decorrent, the pores are round and white, initially small which, with age, become quite large. The stem is branched, white in color, connected laterally to the hats. The meat is white, immutable and of fragile consistency, with an intense odor that is not well definable and has a mild and delicate flavor. White microscopy is observed under the microscope.

Cultivation –
The Grifola frondosa is an excellent food mushroom, traditionally used in Japan both as a remedy and as a food for over 3000 years. The Maitake cultivation techniques were perfected around 1970. Before that, it was only possible to harvest the wild Maitake. Since the cultivation of the Maitake has been developed recently, only in the last twenty years have producers been able to stop depending on the wild Maitake and rely on the cultivated Maitake. Japanese cultivation started regularly in 1981 mainly for food purposes; in that year 325 tons were produced. In 2006, the Maitake cultivation exceeded 50,000 tons per year. Its development is favored by heat and humidity. Very sensitive to climatic variations, check after the first storms in summer until early fall. His extreme sensitivity was a challenge for the growers, but they managed in 1980 to find the conditions for organic cultivation, which is currently available all over the world.

Uses and Traditions –
The leafy Grifola is a rather harmful parasite fungus: its mycelium is rooted for many years at the base of the trunk of the parasitic plant and fructifies sporadically, not every year.
During the feudal age of Japan, the local lords paid homage to the shogun by offering him this mushroom, along with other gifts. To obtain them, they paid the equivalent of the weight of silver mushrooms, undoubtedly a good reason to dance. In the English-speaking world, the Maitake is known as “Hen of the Woods” because it resembles the ruffled feathers of a hen’s tail hatching. It is also called “Sheep’s Head”. Sometimes it is called “king of mushrooms” because of its size.
Mushroom-seekers in Japan jealously guarded the places where they grew up and kept them secret. In order to delimit their areas of the forest, the binders made marks in the trees. The known areas of growth of the Maitake were called “Treasure Islands” and where they were was a carefully concealed secret. Many gatherers kept this secret for life and only revealed it in the will so that the eldest son could find his “way to the treasure”.
Legend has it that those who found it the first time had to dance for joy (hence the name of dancing mushroom), while another story has it that the name is due to the impression of a swarm of dancing butterflies given by overlapping fruit bodies. In the East it is also used for the healing properties that it seems to possess and in particular for some substances able to stimulate the immune system; studies and experiments are underway to verify its antitumor properties. It is a mushroom much sought after by its numerous and loyal admirers for its beauty combined with an excellent yield.
Historically it has been used as an adaptogen tonic, to promote the general health and well-being conditions; in fact, in Japan it was used as a tonic to increase vitality, stimulate the immune system and used in the prevention of degenerative diseases, but was also considered useful in the treatment of metabolic problems. Recent scientific studies have focused mainly on its effects in degenerative diseases. The Maitake has 2 main fields of action: the immune and metabolic areas.
Maitake is rich in minerals (potassium, calcium, and magnesium), various vitamins (B2, D2 and Niacin), fibers and amino acids. The active constituent that enhances and enhances immune activity has been identified in the late eighties, it is a compound wrapped in a beta-glucan polysaccharide protein, a compound sometimes found in mushrooms of the order Polyporales.
Cancer prevention is one of the most commonly used uses for the extract of this fungus; Cell experiments show that Maitake induces apoptosis and inhibits metastasis. In vitro experiments revealed that Maitake inhibits the growth of various types of cancer cells.
Many researchers have indicated that the fungus has the ability to regulate blood pressure, blood glucose, insulin, blood plasma serum and the concentration of lipids in the liver, cholesterol, triglycerides, and phospholipids, and which can be useful for obtaining weight loss or in insulin resistance situations; much research shows that the culinary use of Maitake has a hypoglycemic effect on blood sugar, due to the fact that naturally the fungus contains the alpha glycosidase inhibitor.

Preparation Mode –
The Maitake is a slightly appreciated mushroom, especially for preservation in oil; it is advisable to collect and consume only very young specimens; you can eat it fried but it has an excellent yield for preservation in oil.
In the consumption of this fungus we must be careful because, according to rumors, the species in question has triggered allergic reactions in some individuals. Therefore prudence is advised.