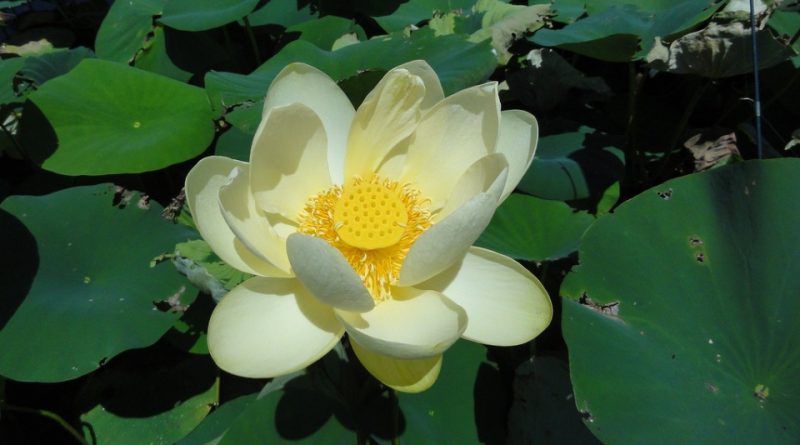 The American lotus flower (Nelumbo lutea Willd., 1799) is an aquatic species belonging to the Nelumbonaceae family.

Etymology –
The term Nelumbo is the Latinization of the indigenous Sinhalese name with which the plant was called in the places of origin. The specific lutea epithet comes from yellow lúteus: yellow.

Geographic Distribution and Habitat –
The American lotus is a plant with origins in an area between the banks of the lakes and the marshes that extend in the south-east of the United States, Mexico, Honduras and the Caribbean, or even the areas subject to flooding of the same regions . Later it spread further north in the USA, probably thanks also to the Native Americans who took it along with them using it as a food source. It is a species that, in suitable environments, tends to become natural and become infesting, multiplying itself both through the rhizomes and through the seeds. 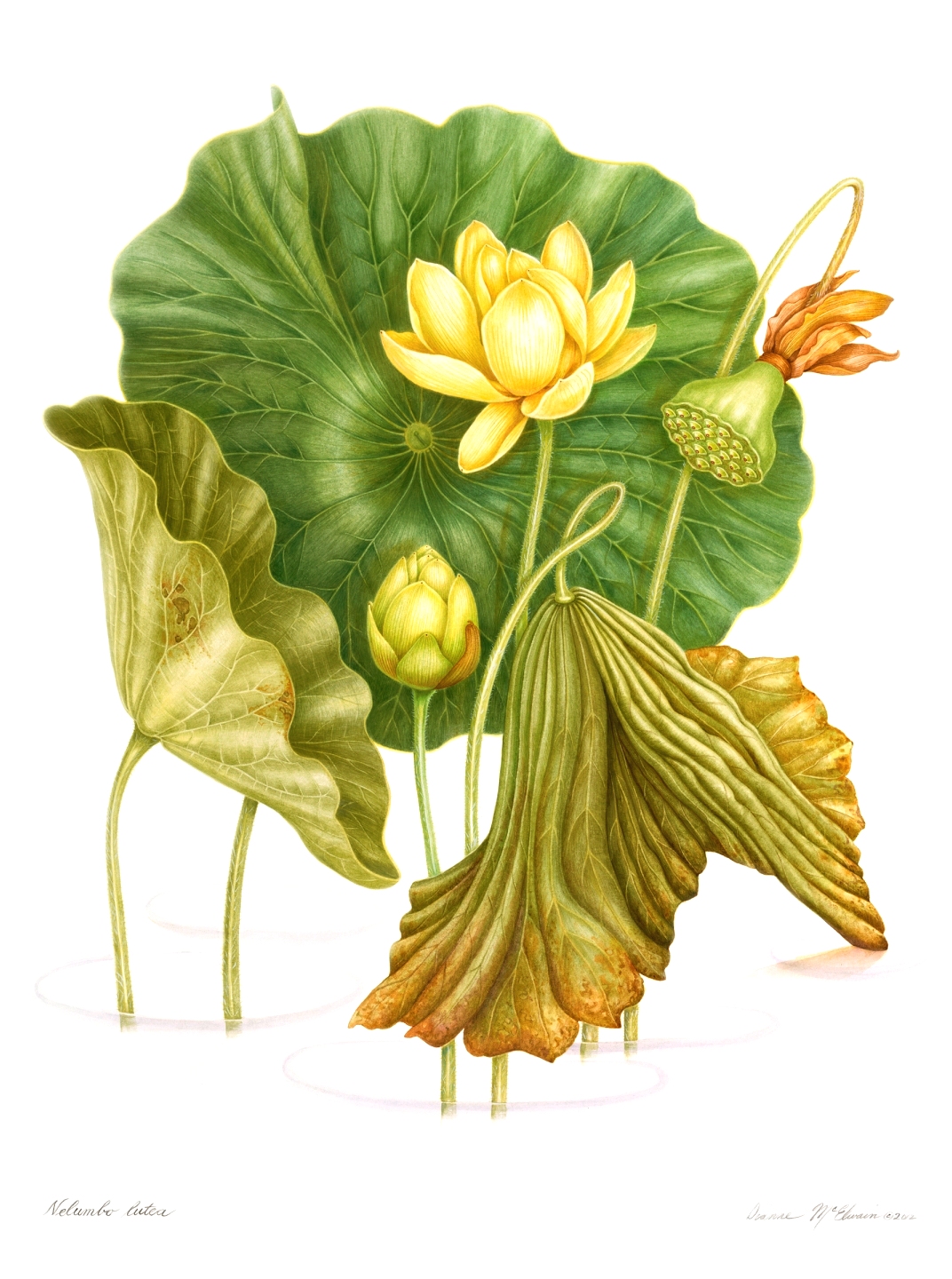 Description –
Nelumbo lutea is an aquatic species whose rhizomatous roots sink into the soil, while the flower and leaves emerge from the surface of the water. It is recognized because the first leaves produced at the beginning of spring are circular and develop on the surface of the water like those of water lilies. Subsequently, larger leaves sprout from long petioles even 2 m (starting from the rhizome) that are peltate and of considerable size, with a diameter of 30-40 cm and covered with a waxy substance that makes them impermeable. Adult plants are generally 80-150 cm tall from the water surface.
The plant blooms from late spring until it continues throughout the summer. The color of the petals varies from white to pale yellow (hence the name of the species). The flowers have a diameter of 18-28 cm and have 22-25 petals.

Cultivation –
The cultivation of Nelumbo lutea can be carried out in environments with particular climatic conditions. In fact, for the period of cultivation and exposure, it must be remembered that the lotus flowers, to bloom, need at least a period of 60 – 90 days with temperatures between 24 ° – 30 ° C and at least 6 hours of light direct solar. For this reason we must start cultivation in spring so as to see the first flowering by the end of the summer.
Moreover, despite its needs, even in conditions of frost of the watery surface, during the winter, the plant survives and will be ready to resume the vegetation during the next nice season. For the cultivation technique, the following sheet can be consulted.

Uses and Traditions –
The lotus flower is an aquatic plant of ancient origins: it appeared on the earth as many as 80 million years ago. To this family belong only two species of plants: the nelumbo lutea which is native to Central-South America and the Nelumbo nucifera which instead is widespread in Asia and Australia. Both produce these characteristic and beautiful flowers, which can have different colors: white, pink, red and yellow. The leaves of the plant are very decorative and each part is edible.
In fact, the American lotus flower represented for the ancient Native Americans a source of food; they fed on the roots of this plant.
Nowadays it is used above all as an ornamental plant in the ponds due to the flowers and very showy leaves.
This species has been hybridized with N. nucifera obtaining several hybrids of great beauty.
Unlike the Indian lotus flower (Nelumbo nucifera), for this species of American origins, there are no known therapeutic properties, nor properties that can be exploited in the cosmetic field. The interest in this lotus flower, therefore, is above all ornamental and alimentary, since it too is edible.

Preparation Mode –
The American lotus flower was, above all a time, consumed for food purposes, it was mainly used the roots and the seeds. today the use of this plant, in the food field is increasingly diminishing.