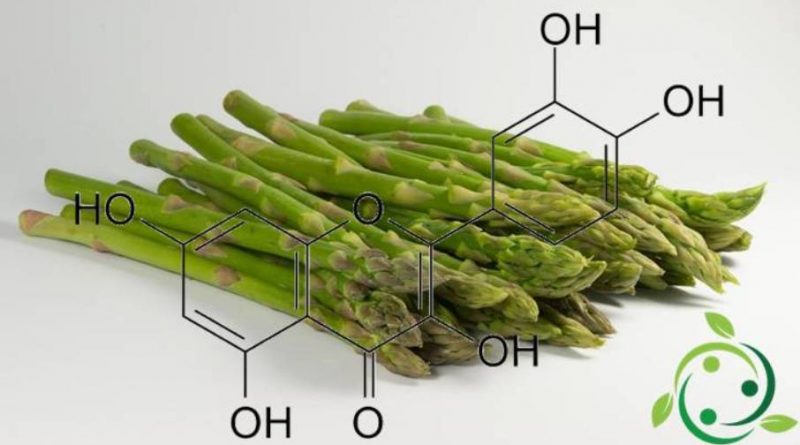 Quercetin is a flavonoid whose IUPAC name is 3,3 ‘, 4’, 5,7-pentahydroxyflavone and the brute or molecular formula C15H10O7.
Quercetin, which belongs to the flavonols group, is the aglyconic component of various glycosides, including rutin and quercitrin. This flavonoid is one of the most common present in nature as it is isolated from many plant species.
It is found in fact in:
– caper (which is the plant that contains the largest amount compared to weight);
– asparagus;
– the lovage;
– red grapes (and red wine);
– the red onion;
– tomatoes;
– green tea;
– berries;
– citrus fruits;
– broccoli;
– the blueberry;
– the Apple;
– the celery;
– propolis;
– and others.
This molecule is known for its high antioxidant and anti-inflammatory power; in fact, quercetin is proposed as a dietary supplement in formulations with antiaging and antioxidant activity.

It is indicated:
– in premature skin aging. This action would be attributable to the capacity, both orally and topically, to counteract the negative activity of solar radiation; the latter, in fact, lead to the synthesis of reactive oxygen species (free radicals) capable of producing structural alterations in the synthesis of collagen and elastin by the dermal fibroblasts.
– In diseases in which oxidative stress and chronic inflammation play a major role. These include allergies, insulin resistance, atherosclerosis, arthritis, Alzheimer’s disease, psoriasis, lupus and many of the diseases associated with aging; Quercetin inhibits several phases that lead to the release of histamine and the production of prostaglandins and leukotrienes with a pro-inflammatory action, as well as the 5-lipoxygenase and phospholipase A2 enzymes.
– Hemorrhoids, venous insufficiency and capillary fragility. The ability of glucosides such as rutin is well known, to act as antihaemorrhagic and anti-edema with an important therapeutic role in the presence of hemorrhoids, varicose veins and typical manifestations of venous insufficiency (night cramps, pain, heaviness and swelling in the legs).
At the same time it exerts a powerful direct and indirect antioxidant action, protecting the activity of endogenous antioxidant enzyme systems: catalase, superoxide dismutase, glutathione peroxidase and glutathione reductase.
The reduction of cardiovascular risk may be promoted by the antiplatelet and antithrombotic activity of quercetin. In addition, Quercetin could also help prevent cancer, but in this sense it should always be consulted anyway and always the doctor. In vitro and on animal models it has indeed been shown to stop the growth or even lead to apoptosis (cell death) colonies of cancer cells of different origins in different replication stages.
However, there are contra-indications. The antiplatelet and antithrombotic activity requires caution in the use of quercetin by patients in treatment with antiplatelet agents (Aspirinetta, CardioAspirin) and oral anticoagulants (Coumadin, Sintrom). Some in vitro studies have attributed to the quercetin a mutagenic activity, not confirmed by long-term in vivo studies.