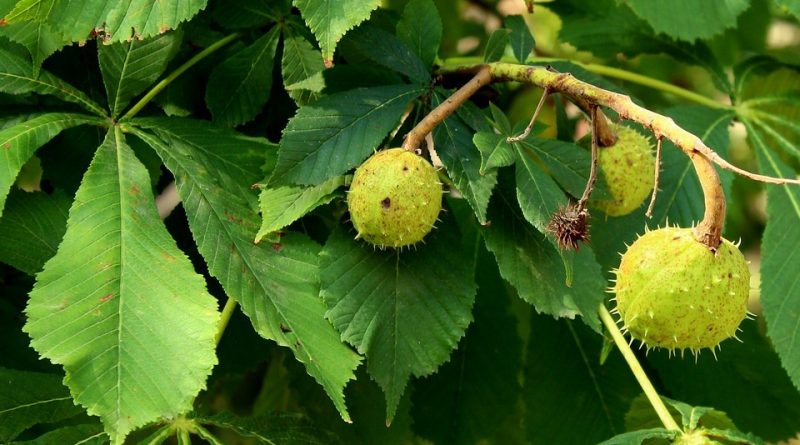 The horse chestnut or chestnut of India (Aesculus hippocastanum L., 1753) is a family tree species of the Sapindaceae.

Systematics –
From the systematic point of view it belongs to the Domain Eukaryota, Kingdom Plantae, Subarranean Tracheobionta, Superdivisione Spermatophyta, Magnoliophyta Division, Magnoliopsida Class, Subclass Rosidae, Order Sapindales, Family Sapindaceae and then to the Genus Aesculus and to the Specie A. hippocastanum.

Etymology –
The term Aesculus comes from Aesculus, a species of oak that grows on the mountains sacred to Jupiter (perhaps Quercus robur?), The name used by Linnaeus, assigning it to this genus. The specific epithet hippocastanum comes from the Greek ἵππος híppos horse and from κάστανον cástanon chestnut: chestnut cavallino.

Geographic Distribution and Habitat –
The common Horse-chestnut finds its ideal environment in the climatic band of the beech (warm sub-area from the Fagetum according to the classification of the Pavari). It is a species originating from the Balkans (Macedonia) and widespread in Europe. The botanists consider it a very ancient witness of the tertiary era and therefore among the most illustrious and long-lived spectators of the birth of civilization. Its introduction into Europe, however, takes place in relatively modern times. It is attributed to Charles de l’Écluse, who brought it to Paris in 1615 presenting it as an ornamental tree. 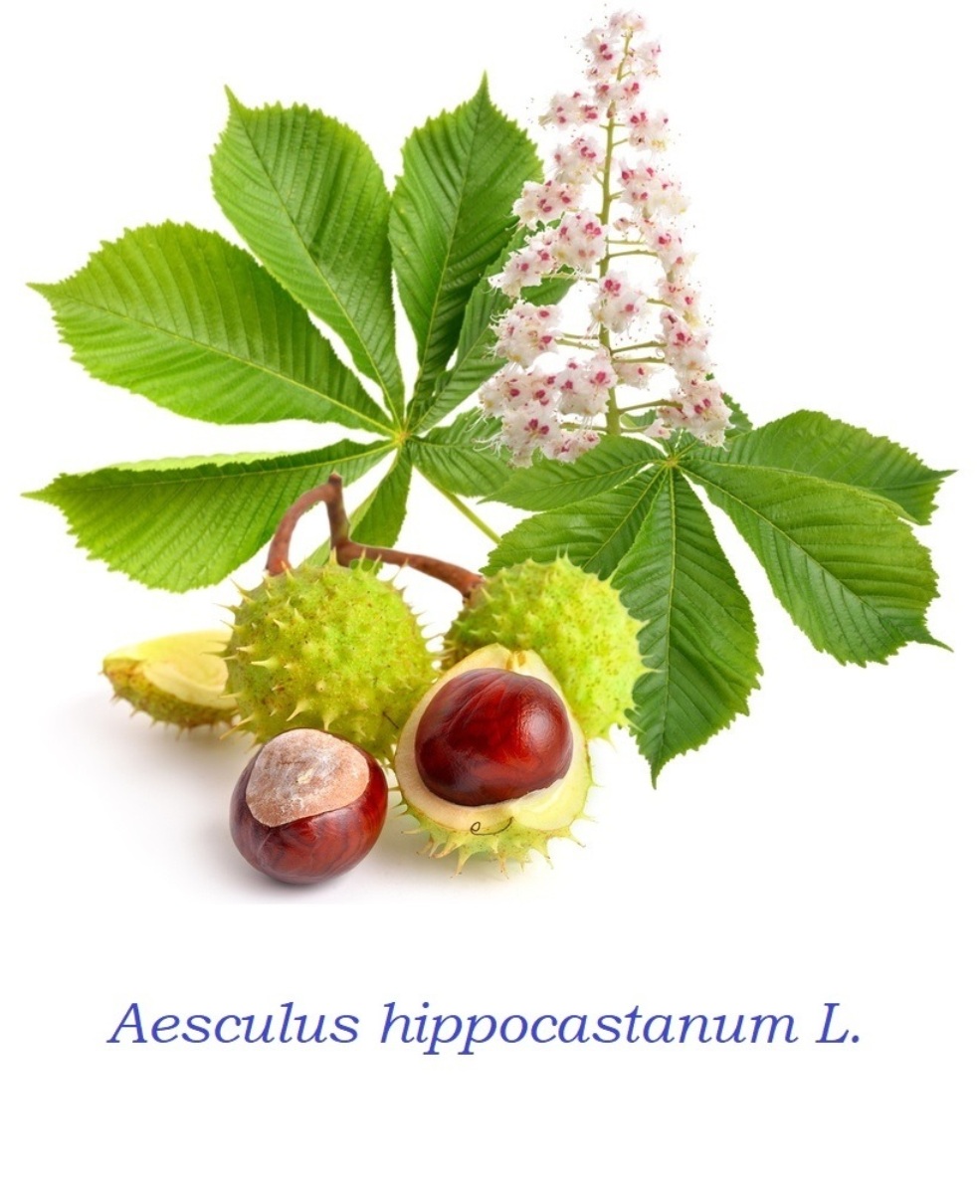 Description –
The horse-chestnut is an arboreal species with an elegant and imposing bearing that can reach 30 meters in height; it has an expanded, globose and majestic foliage in the old specimens. The trunk is straight and gnarled with age, is robust and has a bark before thin, smooth, gray, then gray-brownish, thickened, furrowed and desquamated in small quadrangular plates. The branches are candlestick and lenticelated; they have large, opposite reddish buds, and a large terminal, covered with a viscous substance. The leaves are deciduous, alternate, with long petiole and palmate-composed lamina, with 5-7 oblanceolate-acuminate segments, with serrated margin. They are glabrous, of darker and more sublime chlorination on the upper page and opaque and lighter on the lower page.
The flowers are about 2 cm in size and are white with a yellow hue at the base, gathered in panicles up to 30 cm long, have a 5-lobed calyx and a corolla of 5 petals. The fruit is a large round and greenish capsule, covered with little pungent spines, which opens into three valves and contains a large shiny brown seed (chestnut matta).

Cultivation –
The Aesculus hippocastanum is a plant that prefers sunny places for many hours a day and areas characterized by a hot – humid climate and does not tolerate too low temperatures, salinity and atmospheric pollution. From the pedological point of view it adapts to any type of soil, rich in organic substance and well drained. The young specimens should be watered regularly once a month while the adult ones are satisfied with rainwater.
The plant propagates by seed. The seeds or the chestnuts are sown in autumn immediately after harvesting in protected seedbeds or directly at home. The germination of the seeds will take place in spring. The definitive transplantation of the horse-chestnut is generally carried out in autumn after 3 years of protected cultivation. For the cultivation technique see the following sheet.

Uses and Traditions –
Horse chestnut or Indian chestnut is a species widely used as an ornamental tree in the avenues or as an isolated plant. Create a very large and dense shadow area; for this reason it is a typical tree and tree-lined avenue, both for the beauty of the foliage and for the spring bloom.
The seeds of the horse-chestnut (rich in starch) can be used, in moderate quantities, to feed the horses; in fact, in high doses they can be toxic, causing gastrointestinal disorders and itching. The characterizing active ingredient (used for officinal preparations) is collectively known as escin, a name that represents a mixture of triterpene acylated glycosides (saponins) whose aglycones are mainly proto-terrine and barringtogenol C.
Escin reduces the permeability of capillaries, increasing their resistance and elasticity. Part of this action has also been attributed to the presence in the flavonoid extract such as quercetin and rutin (or vitamin factor P), which are notoriously trophic for the capillary endothelium.
In general, horse chestnut has an anti-inflammatory effect, improves lymphatic drainage and increases venous pressure. For this reason, it is used in the treatment of chronic venous insufficiency, leading to an improvement in the signs and symptoms present in the lower limbs: edema, pain, pruritus, varices, ulcers, sense of tension and / or fatigue.
Horse chestnut extracts also enter the composition of preparations for external use against varicose veins and hemorrhoids. Escin is bound to plasma proteins for which it is suspected that it may alter the transport of certain drugs. It is also hypothesized that high doses of escin may damage the glomeruli and renal tubules and its use in case of renal failure is not recommended. The presence of antithrombotic coumarins causes the association of horse chestnut with anticoagulant drugs to be discouraged due to its potential danger, even if no cases have been described at the moment.
In the past the fruits of the Chestnut tree were used as animal feed (hence the name, literally chestnut for horses).
A flour was obtained from the seeds and after they were roasted, a substitute for coffee.
The fruits of the Chestnut tree have a moderately narcotic effect and the untreated seeds are toxic. The wood of the Chestnut tree is of poor quality, while the bark was once used as a febrifuge. In some parts of Italy, the use of carrying a “chestnut of India” as a talisman against the contagion of cold diseases is still alive.
Horse chestnut is one of Bach flowers, white chestnut. In Britain, the seeds, called conker, are used for a popular children’s game.

Preparation Mode –
Horse chestnut macerate is used by virtue of its decongested properties to improve the functionality of the circulatory system. The mother tincture of horse-chestnut instead is recommended for those with problems of swollen, tired or thinking legs.
In order to reduce bruises and bruises, it is recommended to use the cream based extracts of horse chestnut, which exploits its ability to regenerate cells, improving blood circulation.
Horse-chestnut infusion is an excellent remedy to treat many disorders of circulatory and inflammatory nature and in case of cellulitis. Heaviness of the legs and varicose veins, varicose veins, capillary fragility and imperfections of the skin can be remedied by taking the inflorescence of horse chestnut in the form of decoction. The bark is also used in many herbal preparations.