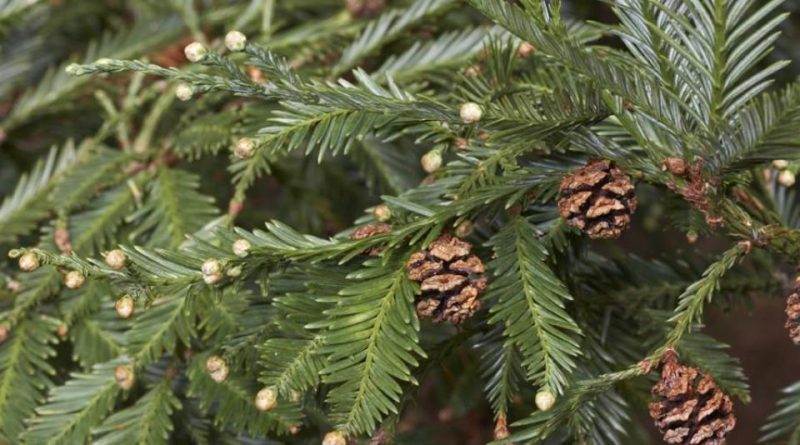 The evergreen sequoia (Sequoia sempervirens (Don, Endlicher, 1847)) is an arboreal species belonging to the Cupressaceae family.

Systematics –
From a systematic point of view it belongs to the Domain Eukaryota, Kingdom Plantae, Subarranean Tracheobionta, Superdivisione Spermatophyta, Division Pinophyta, Classe Pinopsida, Order Pinales, Family Cupressaceae and then to the Genus Sequoia and to the Specie S. sempervirens.

Etymology –
The term Sequoia was attributed by the name of the wise North American native Sequo-yah, belonging to the Cherokee tribe. The specific epithet sempervirens always comes from always verdens and verdens: that is, evergreen.

Geographic Distribution and Habitat –
The Sequoia sempervirens is a tree native to the wooded and coastal areas of North America between California and Oregon. This species naturally grows along the coastal strip that goes from California to Oregon, within a radius of 60 km from the Pacific Ocean; in fact, the plant prefers a type of temperate oceanic climate rich in humidity, it does not tolerate continental climates and temperatures that are too rigid, it is widespread up to altitudes of 1,000 m. above sea level, but generally grows at altitudes below 300 m. It was introduced in Europe in the mid-nineteenth century. 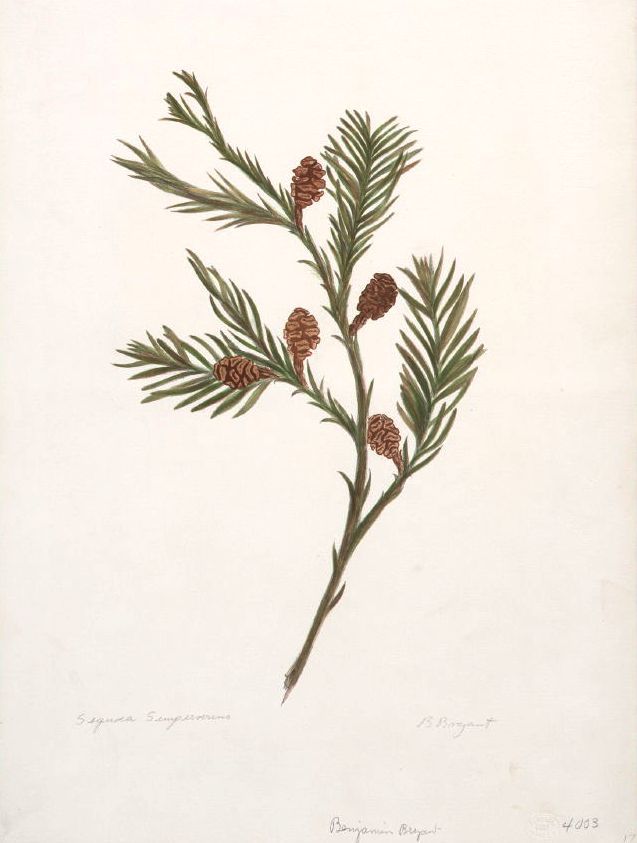 Description –
The Sequoia sempervirens in the areas of origin can reach considerable heights (up to 110 m), while in Europe it does not exceed 40-50 m. The crown is light, soaring, pyramidal columnar. The trunk has a reddish-brown rind, fibrous and comes off with fibers or flakes. The leaves are needle-like (1-2 cm long) and flat, persistent, not pungent, with two grayish bands on the lower page; they are arranged in two rows on the sides of the branches. It is a monoecious species with lateral cones and ovoid endings, with very polliniferous yellow male ones and green feminine ones.
The fruit is an ovoid or globose, woody galbulo, up to 2 cm long, which generally has a peduncle covered with scaly leaves.

Cultivation –
Evergreen sequoia prefers soils of alluvial origin where, in the areas of origin, they form pure or mixed forests with other species of local conifers such as Pseudotsuga menziesii and Picea sitchensis. They also require an oceanic, rainy climate with mild, snowy winters and do not like the cold climates of the continent. In general, the redwoods grow well in deep, moist and well-drained soils, in sheltered positions. The Sequoia Sempervirens tolerates more than the other species the positions completely shaded, but grows faster in the sun. They are planted in autumn or spring, keeping the wet ground in the early years after planting; in March-April a layer of leaves is distributed to promote the soil moisture.
In its natural habitat, this plant reproduces more frequently by means of a large number of suckers that are annually formed at the base of the main stem. Of these, only a few prevail and grow rapidly adding always new trees around the main stem, so as to form over time a large group of trees, all of a single clone and intended to form a dense interweaving with the apical branches, or rather a thick plant surface aerial, seamless, where over time leaf and wood debris accumulate with exceptional characteristics. In fact, here is generated a new air ecosystem, where they live independently plant and animal species also supported by the abundant water reserves that are formed on site.
In cultivations instead, these suckers are cut at the base, generally in November, to make cuttings and easily reproduce large number of plants. With this constant cleaning, the original plant can grow isolated exploiting all the resources in favor of the original stem, which increases in height up to over one meter per year.

Uses and Traditions –
In its areas of origin, most of the redwoods are located within the Redwood National Park and the Yosemite National Park. It is the tallest plant species in the world (it can exceed 100 meters in height), and is also one of the most long-lived, living over 2,000 years.
From the findings found it is clear that, before the glaciation, there were sequoia, or very similar trees, even in Europe. The species was reintroduced in Europe in the first half of the nineteenth century for ornamental purposes, but in this short span of time the Sequoias introduced in Europe, with no more than 100-150 years of life, have reached at most heights of 40-50 meters.
Della Sequoia sempervirens uses wood, reddish in color, easy to work, tender, resistant, durable and highly appreciated.
The redwoods have been planted for both ornamentation and forestry purposes in different parts of the world, including Italy and they are wild in New Zealand.

Preparation Mode –
The evergreen sequoia has no particular agri-food or pharmaceutical uses.