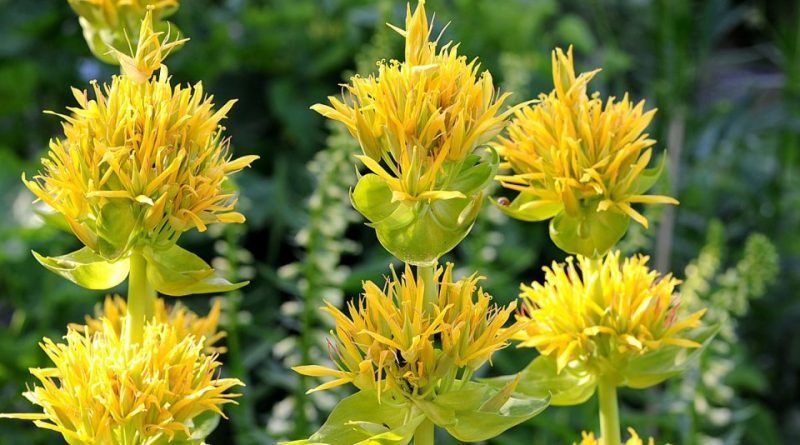 The gentian major (Gentiana lutea L., 1753) is a perennial herbaceous species of the Gentianaceae family.

Systematics –
From the systematic point of view it belongs to the Domain Eukaryota, Kingdom Plantae, Phylum Magnoliophyta, Class Magnoliopsida, Order Gentianales, Family Gentianaceae and therefore to the Kind Gentiana and to the Specie G. lutea.

Etymology –
The term Gentiana derives the Latin name of the gentian; according to Pliny it derives from Gentius (in Greek Γέντιος or Γενθιος Gentios) Genzio, last king of the Illyrians (II century BC), discoverer of the antimalaric properties of the roots of Gentiana lutea. The specific lutea epithet derives from lúteus yellow: that is, of yellow color.

Geographic Distribution and Habitat –
The gentian is a plant that grows in meadows and low-humid pastures, on calcareous soils, rich in organic substances and in full sun .. We find it up to 2200 m s.l.m. in the mountainous areas of southern Europe. It is a species is not very common and for this reason it is a protected plant and harvesting is prohibited. In Italy it is present in almost all the alpine arc, in the central-southern Apennines, at an altitude that varies between 1000 and 2200 m. 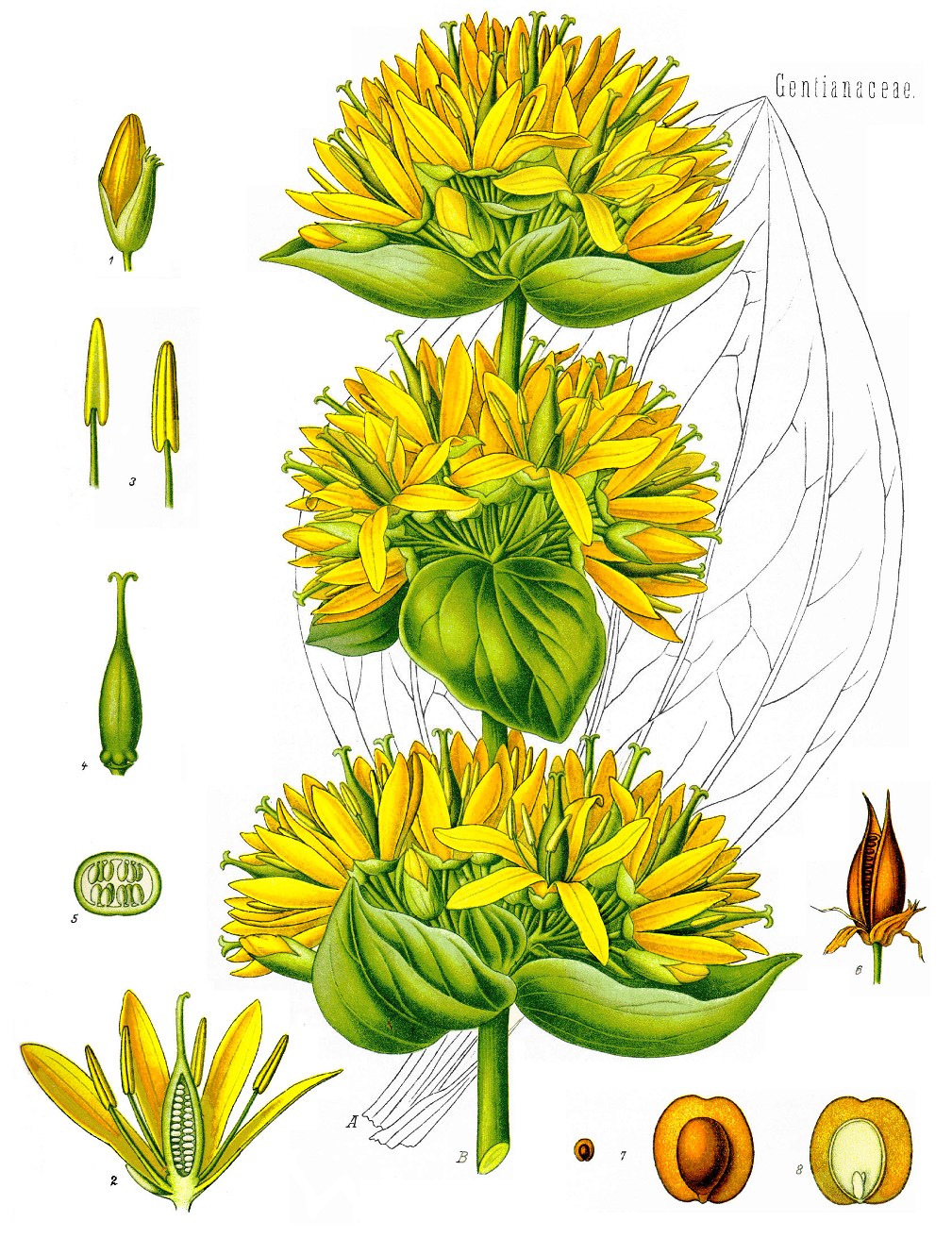 Description –
Gentiana lutea is a herbaceous, perennial species with very slow growth, provided with a vertical underground stem, called rhizome, which is usually horizontal; in the first phase of its growth it is formed only by leaves in basal rosette, but over the years it develops in height, up to 150 cm, with a single stem and hollow inside, green leaves, yellow flowers.
The basal leaves are grouped in rosettes that at the base are narrowed into a sturdy petiole, along the stem they are opposite in pairs, without petioles (sessile), but with the base they embrace (amplessicauli), of green color.
The flowers are yellow (from which the specific epithet), sometimes punctuated with dark, are star-shaped, gathered in bundles to the axil of the upper leaves. The chalice is divided into five small teeth, the corolla welded to the bottom of the tube, is divided up into five linear and lanceolate yellow lobes.
The fruit is an oblong oval capsule, which opens at maturity in two parts, containing brown oval seeds.
The plant blooms between June and July and it takes from 10 to 15 years to flower, but it can even reach 50 years of life.

Cultivation –
As the major gentian reaches commercial ripeness towards the fifth – sixth year, the crop is to be considered multi-year but with only one harvest. The results of research carried out in France and in Germany have made a significant contribution to the cultivation technique of Genziana. For the cultivation technique, the following sheet can be consulted.

Uses and Traditions –
The use of the gentian major is millennial; Pliny and Dioscoride enunciated the beneficial virtues of this plant for the gastrointestinal tract and for the liver, adding also prodigious abilities for the treatment of snake bites.
The gentian major in folk medicine is referred to as a stimulator of immune processes, although no clinical study has ever shown this property. In the past it was used in the treatment of malaria to replace the quinine. The gentian major, but generally all the species of the genus, were considered by the populations of the mountain areas as a sort of panacea, so much so that, in each house there was a bottle of vinegar made with the maceration of the plant, which was used as a universal disinfectant. The ancient peoples of the mountains also had the habit of chewing a piece of root every day, because tradition wanted it to be used to lengthen life, keeping them healthy.
Almost all Gentian are used from memorable times in herbal medicine as aperitifs and digestive. The amarescence of these plants is incredibly high, just think that the bitter taste is noticeable even if diluted in water at a rate of 1: 20.000, the chemical constituent extracted in purity is called amarogentina and has an absolute bitter value corresponding to a very high factor that very few other plants can reach.
A Hungarian legend tells that during a great pestilence, which found no solution despite human efforts, the saint appeared to an angel in King Ladislao, who told him that at dawn he would wake up, he would have to shoot an arrow in the sky; this would have indicated the remedy to heal his people. The next morning the king threw the arrow that fell on a gentian; the root was immediately administered to the plague, which in this way healed. Other legends tell of knights struck by spells of love for the beauty of the plant, for the magnificence of its colors and its charm.
The Gentiana lutea, as mentioned, is a protected species in all Italian regions. This species contains bitter substances, alkaloids, sugars, enzymes, three glucosides: genziopicrina, genziomarina, genziina; a gentisin essence, traces of genziotannic acid.
You can make a food use using its excellent rhizome for the production of liqueurs and aromatic wines.
As a cosmetic use, a concentrated decoction of Gentian can be used to normalize oily skin.
In pharmacological use it is a tonic-stomachic plant: particularly indicated for chronic gastritis due to a poor secretion of gastric juices (hypochlorhydria), for ptosis (lowering) or gastric atony, for indigestion and for vomiting, in case of loss of appetite and during convalescence following febrile illness.
This plant “tones without irritating”. It performs choleretic and cholagogue functions: it stimulates the secretion of the bile by the liver and its emptying in the duodenum. It is useful in cases of hepatic congestion and in biliary dyskinesias (lazy gallbladder). It has febrifugal properties: thanks to its active ingredient, genziopicroside. Experimental studies have shown its leukocytogenic action, that is, capable of sensitively stimulating the production of white blood cells.
However, there are specific contraindications in the use of this essence for people with an ulcer, acute gastritis, esophagitis and hiatal hernia.
We must be careful not to confuse this plant with Veratrum album (which is poisonous), which grows in the same stations, and that in the absence of the flowers is very similar.

Preparation Mode –
The most used part of the plant is the root, which is collected in specimens of at least two years, cut into pieces and left to dry in the sun, during this process loses its typically yellowish color and takes on reddish brown hues.
All pharmacological and health treatments must always be performed under close and direct medical supervision.