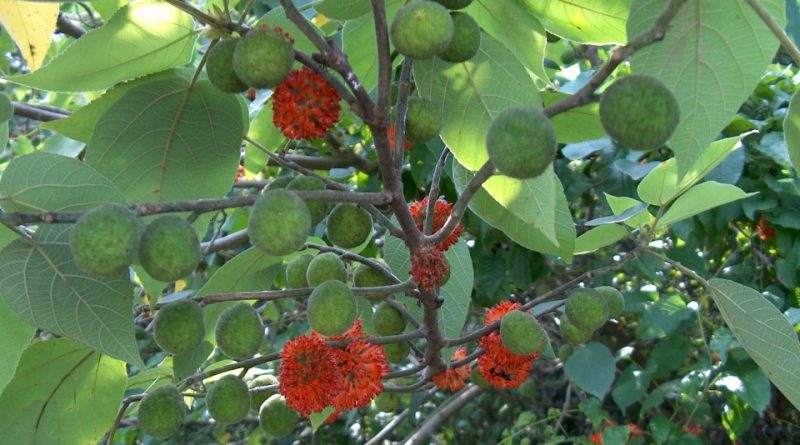 The Paper Mulberry, also known as the Chinese Moro (Broussonetia papyrifera, (L.) Vent.) Is an arboreal species belonging to the Moraceae family.

Systematics –
From the systematic point of view it belongs to the Domain Eukaryota, Kingdom Plantae, Phylum Magnoliophyta, Class Magnoliopsida, Order Rosales, Family Moraceae and therefore to the Genus Broussonetia and to the Specie B. papyrifera.

Etymology –
The term Broussonetia is dedicated to Pierre Auguste Marie Broussonet (1761-1807), French botanist who erborated in the Canary Islands, France, Morocco and Portugal and was the first to introduce female plants of Broussonetia papyrifera from China in the late eighteenth century. The specific epithet papyrifera comes from papyrus papiro, a plant from which the paper was extracted and to be taken as a suitable plant for the production of paper.

Geographic Distribution and Habitat –
The Paper Mulberry is a tree species native to eastern Asia, in an area between China and Burma. The plant was introduced into Europe as an ornamental essence around the mid-eighteenth century, soon escaped from gardens and parks thanks to its frugal and pioneering character and today is easily found along the edges of roads and railroad tracks and in the uncultivated along the beaches. 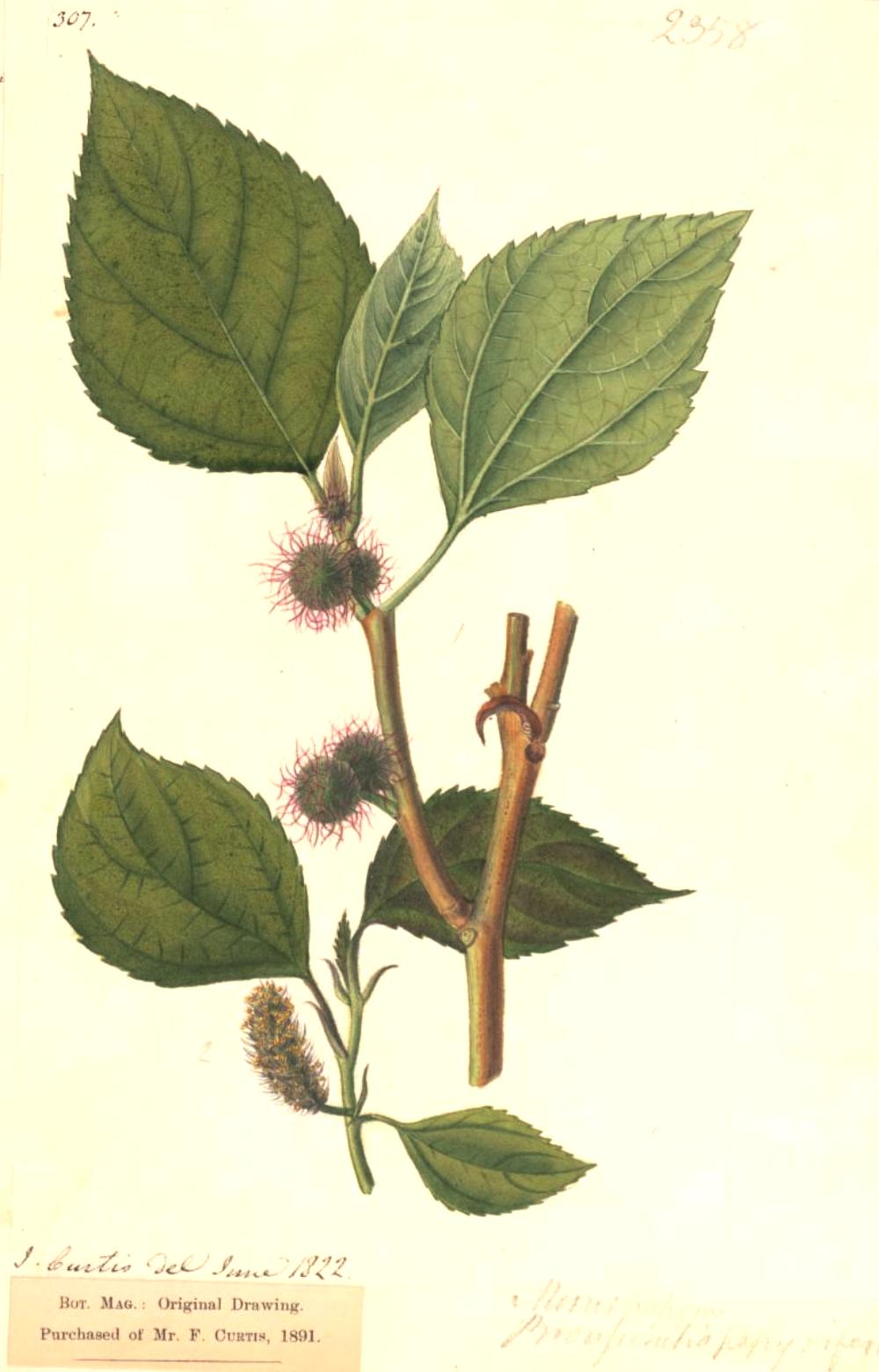 Description –
The Broussonetia papyrifera is a tree that in the area of ​​origin can reach 15 meters in height, with foliage very expanded horizontally. The plant has a bearing that can be either arboreal, with a broad and expanded crown, or bushy, with a lower and more branched foliage. The trunk is lean and straight, with brown-gray skin and smooth as a young man, then cracked, which reveals the young cork brown-purple underneath. The leaves are alternated petioles of 4-8 x 7-12 cm, ovate lanceolate, serrated in the margin, deep green above, greyish and tomentose below. Those at the base of the branches are whole, the distal ones have 3-5 deep lobes separated by an inlet. It is a dioecious plant with male trees that produce small yellow flowers grouped in axillary spikes and female trees where we find small spherical and compact flower heads of small greenish flowers reduced to the pistil only. The fruit of this plant is a sorrow, similar to mulberry, spherical, of 2 cm of diameter, of reddish-orange color when ripe. Flowering takes place from May to June. Pollination is favored by the wind.

Cultivation –
The Broussonetia papyrifera is a rustic plant, indifferent to the substrate, withstands cold and poorly luminous positions. It adapts to any situation: sun or shade, fertile or poor soils, dry or wet, deep or stony, etc. Even the climate is not a problem: only the mountain prevents it from prospering, as it fears prolonged frosts. Fertilization is not essential. Pruning takes place only in case of excessive encumbrance. For rapid growth it can be used where you want to quickly shade. The multiplication occurs by seed in autumn, or by semi-woody cutting in summer. It also multiplies normally through the transplant of basal suckers that can be removed. By first rooting them in a container, the next spring will be planted.

Uses and Traditions –
The name “Paper mulberry” recalls the use of its bark for the production of paper in East Asia since ancient times, hence also the name of the species “papyrifera”, because it is useful for papyrus production. In the Far East, the rind is used which, when macerated, provides a good quality paper. In the East, the macerated bark was used in the production of paper. Broussonetia papyrifera has different medicinal properties: it is galactogogue, diaphoretic, hemostatic, astringent, ophthalmic, stimulant, stomachic, diuretic, laxative, tonic.
In China it is used to replace the Mulberry for the breeding of silkworms.
From the bark of the plant we obtain very long fibers used in Polynesia to produce yarns and fabrics. In the territories of origin the macerata bark was once used to produce the fine paper, with a fine and silky appearance, known as “Chinese paper or silk paper”.
The production of the paper dates back to the 2nd century AD The Chinese minister, Ts’ai Lun, went every day to a pond used for washing and looked at the women washing their clothes.
One day he realized that the fibers, detached from the worn-out clothes by the scrubbing and whipping of the washerwomen, accumulated in a loop of the pond and gathered together like a very thin felt. Ts’ai Lun picked up the wad gently, set it to dry and spread it.
Thus a sheet of a certain consistency, of whitish color and suitable for writing, was born.
The minister ordered to replace animal fibers with plant fibers in the manufacture of felts.
The first material adopted by Ts’ai Lun was the cortex of Broussonetia papyrifera.
The fibrous part of the bark was macerated in water, rinsed and then beaten in stone mortars until a uniform paste of cellulose fibers was obtained.
The dough, diluted with plenty of water, was poured over the “shape”, a lattice formed by very thin bamboo sticks. The water passed through the meshes of the grid and the fibers, clinging to each other, remained on the surface forming a sheet of small thickness which, detached from the shape, was placed to dry in the air.
The request for writing paper was initially rather reduced. The paper, in fact, even before being used as a support for writing, in China had been used to make garments. The first citations relating to this use date back to the first century BC. Around the middle of the III century AD the Taoist priests, poets and pupils wore paper hats. With the paper, kites, lanterns and fans were built.
Due to the wealth of suckers, the rapid rooting and its rusticity is used to stabilize mobile and landslides.

Preparation Mode –
Currently the Broussonetia papyrifera has no other uses, at least in Western countries if not ornamental ones and for hydrogeological purposes for the stabilization of mobile and landslides.