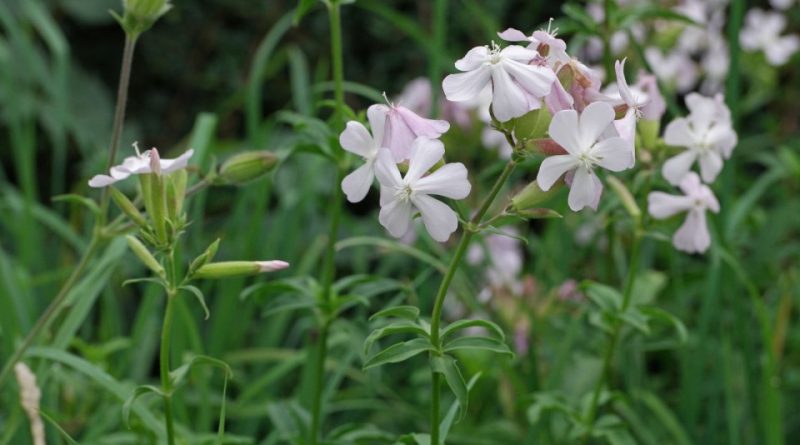 Systematics –
From the systematic point of view it belongs to the Eukaryota Domain, Kingdom Plantae, Magnoliophyta Division, Magnoliopsida Class, Order Caryophyllales, Family Caryophyllaceae and then to the Saponaria Genus and to the Species S. officinalis.

Etymology –
The term Saponaria comes from sápo, soap soap: because all the parts of the plant and especially the roots (up to 20% in the flowering period) contain saponins that can be used for washing. The specific epithet officinalis derives from offícina, medieval laboratory: usable in pharmaceuticals, herbal medicine, liquor, perfumery and the like.

Geographic Distribution and Habitat –
Saponaria officinalis is a typically Eurasian entity: it is found from Europe to Japan in cold and temperate-cold areas. The species is widespread throughout continental Europe, in Italy it is very common and is present throughout the territory. Its habitat is that of fresh and humid land, the banks of watercourses, ruderal environments, fields and man-made areas. 0 ÷ 1,000 m s.l.m. 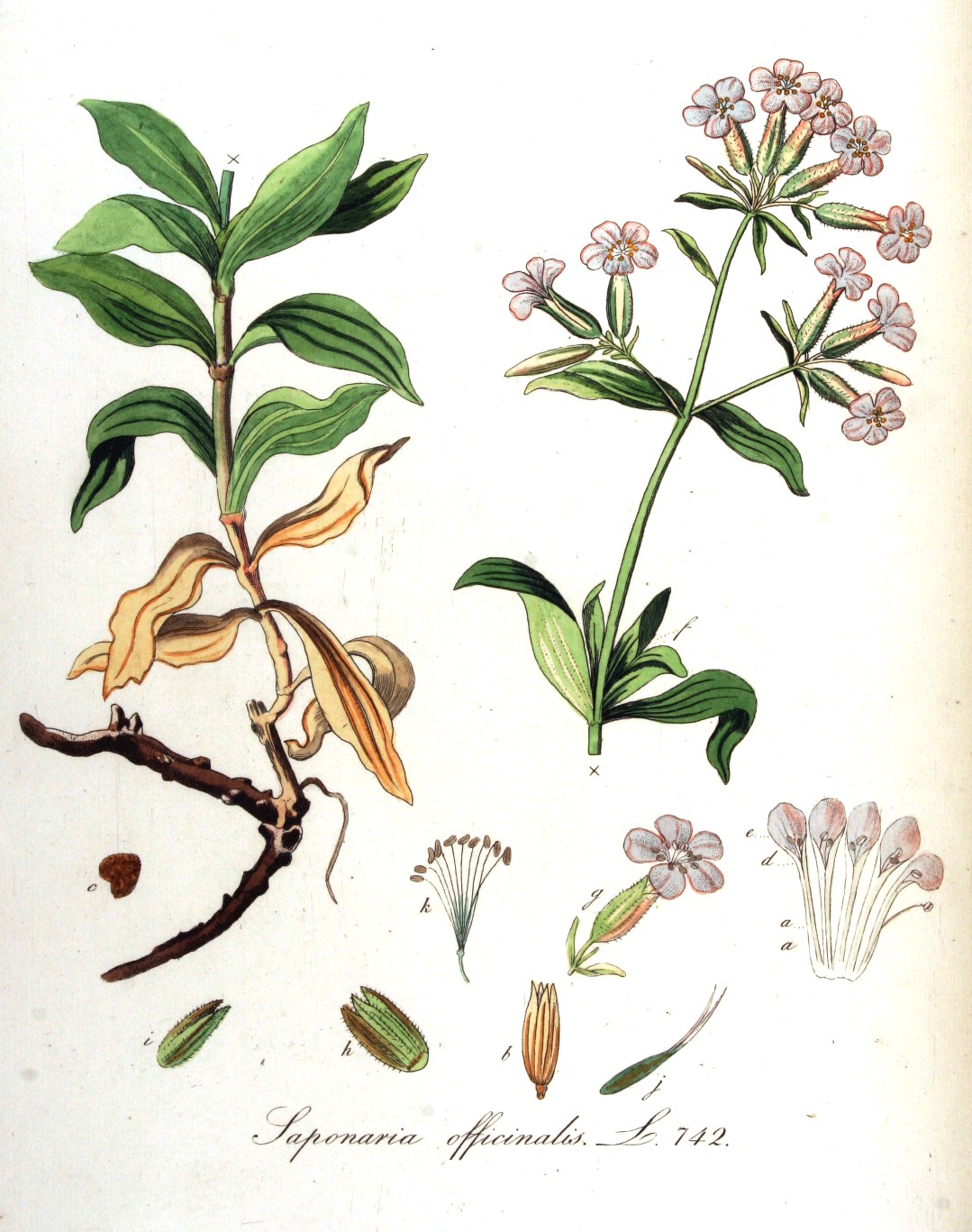 Description –
The common soapwort is a perennial herbaceous species that can reach 1 m in height; it is provided with a creeping, reddish brown branched rhizome; the stems are erect or ascending, glabrous or slightly pubescent, sometimes woody at the base. The sterile or simple stems have opposite leaves, oval, oblong and curved, the lower briefly petiolate, the upper sessile and opposite the nodes, covered with short or hairless hairs, wrinkled on the edges, with 3 (5) ribs detected.
The flowers are gathered in compact buds at the apex of the stems and are of a more or less intense pink color, with 5 freshly smeared petals, purple, tubular and pubescent calyx. They have a delicate scent that manifests itself especially towards the evening.
The fruits are oblong-piriform capsules, dehiscent for 4 apical teeth that contain numerous reniform seeds, black, with tubercular surface.
The antesis is in the period from June to October.

Cultivation –
The cultivation of Saponaria is quite simple; it is a plant that adapts to any terrain, provided it is placed in a sunny position. It is sown from the beginning of March to the middle of June, thinned out at a distance of 15-20 cm. If it is sown in autumn it will be possible to have an earlier flowering. Sowing in the home (does not like transplanting) presents some difficulties when you want to grow plants in the cracks of the walls and rocks, as in the case of S. pumila, caespitosa and especially Calabria, very suitable for this destination. In this case it is better to sow small peat jars, placing a few seeds in each; when the seedlings will be grown it will leave 1 per jar, and then gently you will try to compress the jar inside the crack. For details of the cultivation technique, the following sheet can be consulted.

Uses and Traditions –
The common soapwort was already used as soap by the Assyrians in the eighth century BC. Five centuries before Christ there was talk of soap to degrease the wool that the nomadic peoples of Asia used to weave their famous carpets.
Around 400 a. C., the great physician Hippocrates cited the therapeutic possibilities attributed to the saponaria roots “capable of purifying the body and giving women rosy skin, worthy of that of Venus”. The ancient Romans used it in the thermal baths, while in ancient times the Arab doctors employed it in the treatment of leprosy.
In The English Physitian Enlarged (1653) Nicholas Culpeper states that this plant “is an excellent cure against syphilis”. Its use in treating the symptoms of this disease and other venereal diseases was also recommended by Greve (A Modern Herbal 1931), especially in cases where it had failed the treatment with mercury, used for about 400 years.
The species belonging to the genus Saponaria have been imported in ancient times in Europe to bring a note of color in the gardens of the castles, in the conventual gardens and in the cloisters of the monasteries; only later they became widespread and naturalized. Today the Saponaria officinalis is frequently found in the wild on the sites of the old woolen mills, where it was once cultivated to wash the fabric.
The properties of this plant are mainly purifying, diuretic, expectorant, sudorific and tonic and in medicine is used for internal use in case of gout and dermatitis, bronchial congestions and jaundice even if today it is rarely used for its irritating effect on the digestive system . Used in excess in fact destroys the red blood cells, causes paralysis of the vasomotor centers. For external use the decoction is useful in case of dermatitis and for skin affected by acne or psoriasis. Although sometimes recommended as a shampoo, it can cause severe eye irritation.
The active ingredients are saponins (gustubinic and saprubrinic acid), mucilage, resins, flavonoids, vitamin C, vitamin E, gum, vitessin. Saponins are contained in all parts of the plant, particularly in the roots, which can contain up to 20 percent during the flowering period.

Preparation Mode –
The root and the dried leaves were used before the commercial production of soap, around the beginning of the nineteenth century, started as a detergent to wash delicate items. A decoction obtained by boiling the various parts of the plant in rainwater is indicated to restore splendor to ancient silk fabrics, lace and embroidery, whose colors have been dimmed by dust. From the maceration of the root an expectorant liquid is obtained, to be taken with extreme caution.