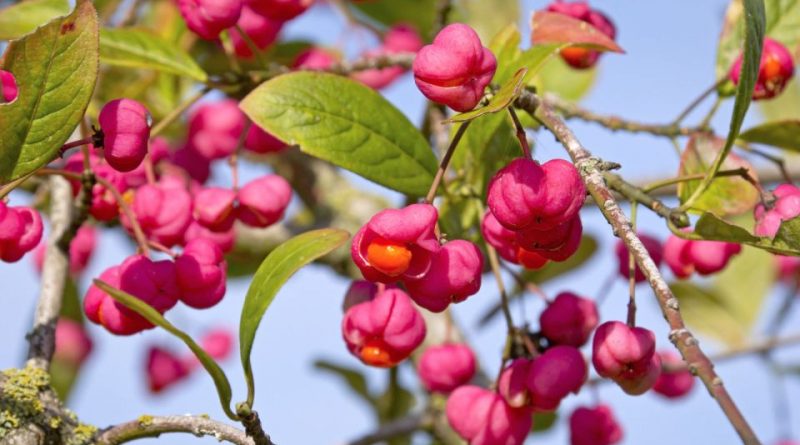 The priest’s bonnet, also known as fusario or euonymus (Euonymus europaeus L.) is a shrub or tree species of the Celastraceae family.

Systematics –
From the systematic point of view it belongs to the Domain Eukaryota, Kingdom Plantae, Subarranean Tracheobionta, Magnoliophyta Division, Magnoliopsida Class, Subclass Rosidae, Celastrales Order, Family Celastraceae and therefore to the Genus Euonymus and to the Specie E. europaeus.

Etymology –
The term Euonymus comes from the Greek ἐῧ éu true, well, to perfection and ὄνομα ónoma name, fame, reputation: auspicious, good reputation, in an ironic sense because all the parts of plants of this genus are poisonous; the name was used by Teofrasto. The specific epithet europaeus refers to its widespread diffusion in Europe.

Geographic Distribution and Habitat –
Fusaggine is a shrub that grows in mixed hardwood forests. It is a Euro-Asian species and in Italy it is present throughout the national territory. 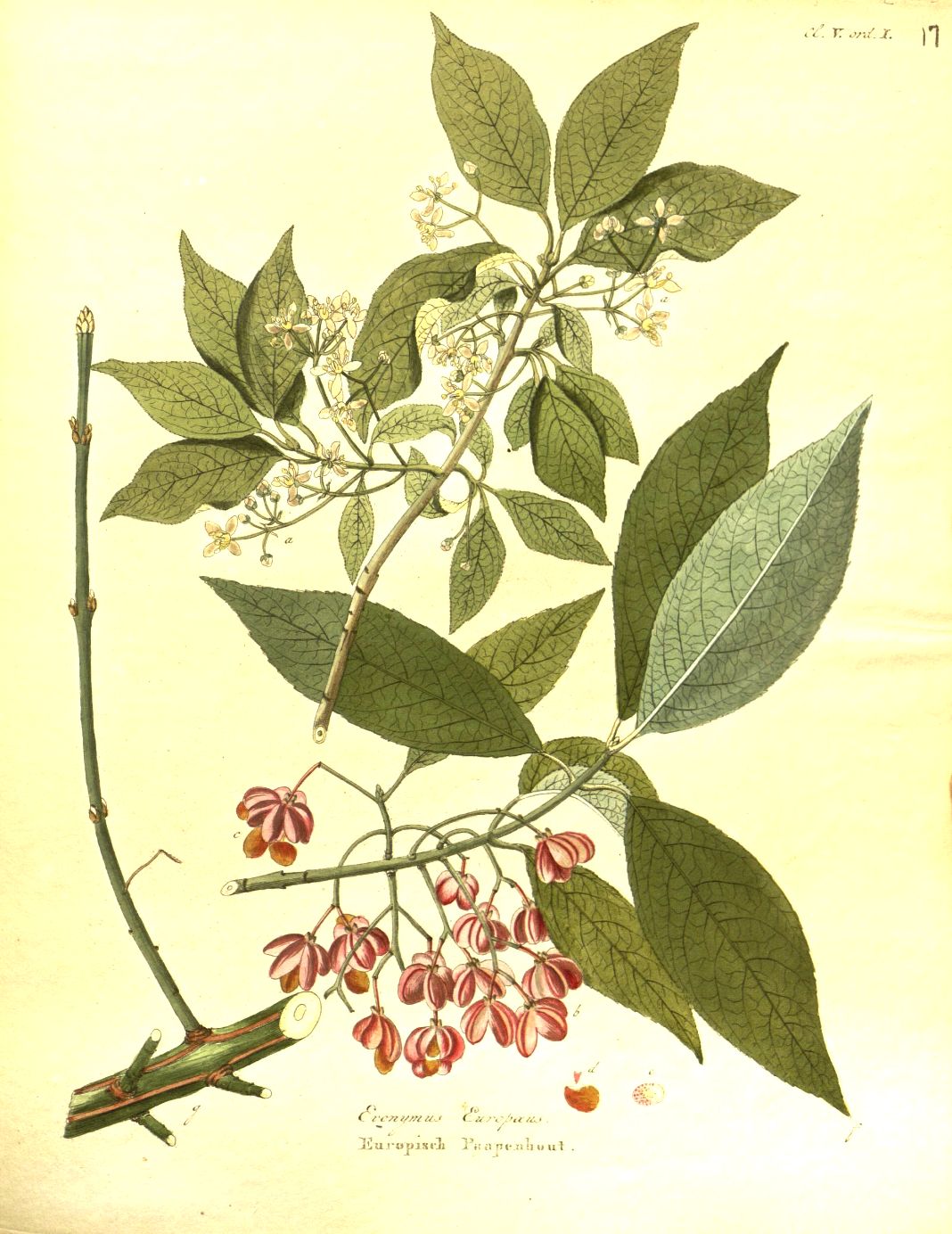 Description –
The Euonymus europaeus is a tall plant from 3 to 8 meters; it has an erect stem and a grayish-greenish bark at a young age which then turns brown-reddish, smooth, like the branches, which are young from glabrous. The young branches are characteristically quadrangular and have the clear green dotted bark. It has opposite leaves of about 3×7 cm, provided with 4-8 mm long petioles and with ovate-lanceolate lamina, acute or sharp at the apex, with a rounded base and finely serrated edge; the upper page is glabrous and of a dark green color, while the lower one, which is lighter, is glabrous, or may present at the most of the pubescence along the ribs. In spring, small white hermaphroditic flowers are formed which, in autumn, give rise to the characteristic red fruits with a curious shape similar to the hat used by Catholic priests (from which it takes its common name).

Cultivation –
The priest’s hat can be grown in both shady and sunny areas, even if this last solution is recommended. These are plants that are resistant to cold and can also withstand a strong heat during torrid summers. They tolerate both the pollution of the cities and the salty air of the marine areas. It should be irrigated regularly from March to October, at least one day a week, especially during periods of prolonged drought. During the winter it is sufficient to water the evergreen species sporadically. Generally this type of shrub can tolerate drought without any problem, even if it develops better if it is watered regularly, always waiting when the soil is dry. The soil in which the euonymus grows can be of any type, even very alkaline and poor. But for optimal development it is advisable to plant it in medium-textured soils with a good amount of organic substance with leaves still partially decomposed. The multiplication occurs by seed in autumn or by cuttings in summer.

Uses and Traditions –
The toxicity of the fruits of this plant was already known to the Latin historian and naturalist Pliny the Elder. Hardwood was used to make spindles and toothpicks; the gypsies used it instead to obtain sewing needles and crutches. The Euonymus europaeus is therefore a poisonous plant (leaves and in particular bark and fruit) that for the beauty of the fruits and of the leaves, red in autumn, is widely used in parks and gardens. Its wood that smells of apple is very ductile and was once used in inlay work, and to make the “spindles” for wool (hence the common name of Fusaggine names).
The young, charred branches were used by painters like charcoal; furthermore, light coal enters the composition of gunpowder.
The active ingredients consist of a bitter glycoside and a probable digitalic action: the evoniminate and from dulcite, evonic acid, asparagine, phytosterine and resins.
The priest’s hat is used therapeutically; Orally it is to be used with absolute caution: it has energetic purgative and emetic action. For external use the decoction of leaves is healing, while the fruits reduced to powder, or their decoction, are useful against skin parasites (lice and scabies mites).
Attention because high doses or occasional ingestions of fruits (3 or 4 of them purgate an adult man vigorously) can cause serious poisonings, which manifest themselves with persistent abdominal pain, vomiting and diarrhea, therefore with loss of knowledge.
For this reason it is a plant to be avoided absolutely, due to its toxicity and difficulty in dosing.
Furthermore, particular attention must be paid as the rosy, acre and poisonous fruits can attract the attention of the children.

Preparation Mode –
Due to the toxic characteristics of Euonymus europaeus, it is absolutely not recommended to prepare any home preparation for any use.