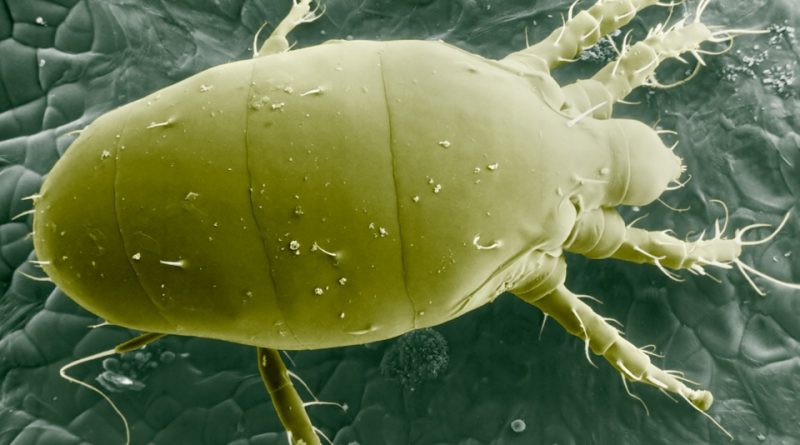 The mite tarsonemide of protected cultures (Polyphagotarsonemus latus (Banks, 1904)) is a small mite belonging to the Tetranychidae family.

Systematics –
From the systematic point of view it belongs to the Domain Eukaryota, Kingdom Animalia, Subarranean Eumetazoa, Phylum Arthropoda, Class Arachnida, Order Trombidiformes, Family Tetranychidae and then to the Genus Polyphagotarsonemus and to the Specie P. latus.
The term Steneotarsonemus latus is synonymous.

Geographic Distribution and Habitat –
Polyphagotarsonemus latus is a particularly destructive small mite especially in tropical and subtropical regions, even in greenhouses. It is highly susceptible to low temperatures and has been reported in greenhouses in the northern regions and in open fields in Sicily and other southern regions.

Morphology –
The mite tarsonemide of protected cultures is recognized because the tarsonemide females are ambraceous in color and measure about 190 microns. The eggs are translucent with an elongated oval shape, adorned with whitish tubercles arranged in longitudinal rows.

Attitude and biological cycle –
The females of Polyphagotarsonemus latus lay their eggs on the soft tissues of the plant organs, which constitute its diet. From the eggs they originate mobile larvae, endowed with six legs and whitish color that subsequently become quiescenti, immovable, from which the adults will come alive. Each female has a life cycle of 7 to 18 days, depositing an average of 48 eggs during this time frame. A generation, with 28 ° C and relative humidity around 70-80%, reaches completion in 5-8 days.

Ecological role –
Polyphagotarsonemus latus is a species of microscopic mite found on many plant species, including important agricultural species such as grapes, apples and other fruits. Currently these mites are affecting cannabis plants because of their greater spread after the legalization of cultivation. This mite is found in many areas around the world and is an important parasite in greenhouses. Infestations with Polyphagotarsonemus latus can cause the slowing and rotation of leaves and flowers and the blackening and death of young seedlings. The damage is similar to that caused by herbicides. This mite prefers areas of high humidity and low temperature and can be controlled by removing and destroying infested plants and using acaricides. In Italy it is present not only on lemon but also on various solanaceous such as aubergine, pepper, potato and tomato, tobacco, bean and ornamental plants such as dahlia and gerbera.
On the pepper plants infested by the tarsonemide a stunted development, brachizing effect is revealed and the presence of deformed vegetative apexes, leaves of reduced dimensions and of color tending to the silvery on the inferior page and stems with superficial necrosis.
The activity of the mite causes the arrest of the development of the fruit, a phenomenon that is all the more serious the more the attack is precocious.
On the aubergine, the damage is concentrated above all on stems and fruits, where superficial suberifications appear on the branches and take on a silver or ocher color; rusty and deeply chapped areas appear on the fruit.
On the potato the most damaged organs are the shoots, which tend to spin producing small and deformed leaves.
Deformations of a certain size also occur on the bean leaves, which take on a boat conformation developing asymmetrically.
The fight against this mite is obviously preventive. The measures, even of a biological nature, are not necessary if the conditions of the agro-ecosystem are excessively specialized and with exaggerated environmental conditions (greenhouse crops). For this reason it is advisable to create less specialized agro ecosystems, with grassing, presence of biodiverse hedges and well-planned associations and rotations. Furthermore, the use of insecticides, unbalancing the biocenosis of predators, greatly favors the populations of this mite, subsequently creating very difficult conditions of struggle.
The biological fight against these harmful mites can be carried out using predatory mites. The latter are often smaller than their prey and are not harmful to the plant. Numerous predatory mites feed on tarsonemes, especially Phytoseiulus persimilis (Phytoseiulus System, Phytoseiulus T system, Phyto-line p, Spidex, Spidex Plus) and Amblyseius californicus (Californicus system, Ambly-line cal, Spical). They are particularly useful in the presence of other mites such as Tetranychus sp. while they have no effect on the Tarsonemus pallidus and on the Polyphagotarsonemus latus.
For the fight in protected cultivation, the preventive use of acaricides is essential because these populations are rarely homogeneous.
The constant evolution of regulations and registrations of plant protection products and considering the different legislations present in each state, do not allow to consider the current status of homologations. It is advisable that each producer informs himself in order to comply with the latest regulations concerning the use of individual plant protection products. It is strongly recommended to carry out a test on a plant sample beforehand to evaluate the action of the active matter (dose) and the reaction of the crop (phytotoxicity).