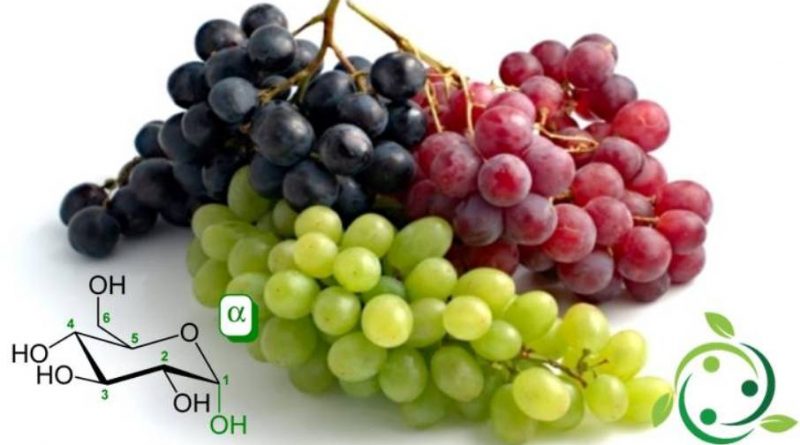 Glucose, whose brute or molecular formula is C6H12O6 and the chemical formula CH2OH (CHOH) 4CHO, is also known as glycose or dextrose (limited to the dextrorotant enantiomer), is an aldehyde monosaccharide and is the most widespread organic compound in nature, both free and in the polymeric form.
Glucose is a chiral molecule, so there are two enantiomers:
– The dextrorhous enantiomer (D-glucose or dextrose) which is the most widespread in nature; it is present in the free state in numerous sugary fruits and is also found in most organic liquids, in the liver, in the blood and in the spleen.
– The levitrous enantiomer (L-glucose).
Glucose is an aldohexious sugar because its molecule is composed of six carbon atoms (-exious) and contains an aldehyde carbonyl group -CHO typical of aldehydes (aldo-). The most stable form is that one of the hydroxyl groups binds to the C1 carbon of the aldehyde group (-CHO) to form a 6 atoms ring, a pyranose ring.
The ring formation reaction is reversible; at pH 7 about 0.0026% of the molecules is present in an open form.
Of the two enantiomers, only the first (D) is that used and produced by living organisms.
At the level of living organisms it is the product of chlorophyll photosynthesis both in plants and in some prokaryotes; it is also produced in the liver by splitting glycogen stores; it is produced in the liver and by the gastric adrenal gland by a process known as gluconeogenesis.

Glucose is one of the most important sugars and is used as an energy source both by animals and plants. Glucose is the main product of photosynthesis and is the fuel of respiration.
In breathing, through a series of reactions catalyzed by enzymes, glucose is oxidized to form carbon dioxide (CO2) and water (H2O); the energy produced by this reaction is used to produce the ATP molecules.
The chemical-physical characteristics of glucose are:
– It is soluble in water (909 g / L at 25 ° C) but slightly soluble in ethanol. A solution of 100 g / L in water at 20 ° C has a pH of around 7.
Glucose is an important source of ubiquitous energy in biological systems. To date the reasons why life use this sugar in place of another are not all very clear.
In the absence of life forms that synthesize glucose, this sugar can form chemically from formaldehyde, which is why it is possible that it was present and available when the first primitive biochemical systems were born. Another property, perhaps more important for higher life forms, is its reduced tendency (compared to other hexose sugars) to react with the amino groups of proteins. This reaction (called non-enzymatic glycosylation or glycosylation) reduces or cancels the activity of many enzymes and is responsible for many long-term effects of diabetes, such as blindness and reduced renal function. The low reactivity of glucose towards glycosylation is due to its prevalent persistence in the cyclic, less reactive form.
When a glucose and a fructose molecule are joined by a glycosidic bond, a sucrose molecule is formed, which is then the common table sugar. Starch, cellulose and glycogen are glucose polymers and are generally classified as polysaccharides.