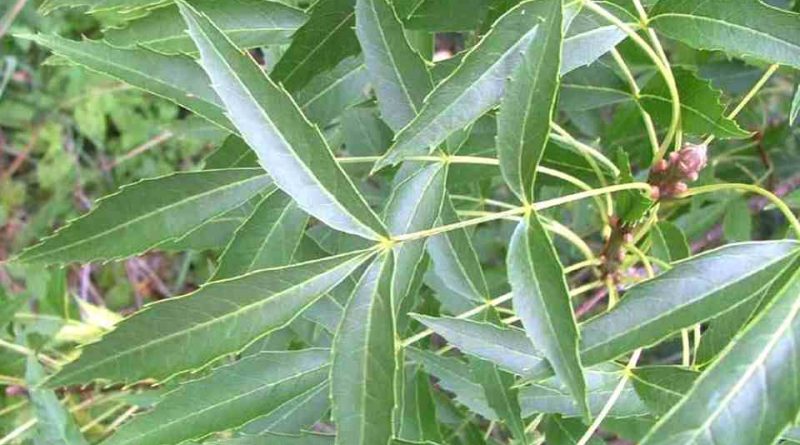 The Narrow-leaved ash (Fraxinus angustifolia Vahl, 1804) is an arboreal species belonging to the Oleaceae family.

Systematics –
From the systematic point of view it belongs to the Eukaryota Domain, Kingdom Plantae, Magnoliophyta Division, Magnoliopsida Class, Order Scrophulariales, Family Oleaceae and therefore to the Genus Fraxinus and to the Specie F. angustifolia.
The terms are synonyms: Fraxinus oxycarpa Bieb., Fraxinus oxyphylla Bieb. And Fraxinus rostrata Guss ..

Etymology –
The term Fraxinus comes from the classic Latin name of the ash tree in Virgil and others, derived from the Greek φράξο phráxo hinging, close: tree suitable for forming hedges. The specific epithet angustifolia derives from narrow, narrow angustus and from folium leaf: with narrow leaves or leaflets.

Geographic Distribution and Habitat –
The Narrow-leaved ash is a species found in southern Europe, from the Iberian Peninsula and from France to the Caucasus. Its area of ​​origin could be centered around the Black Sea (steppe continental climate with cold winters, hot summers and always very low rainfall). In Italy it is present in all regions. 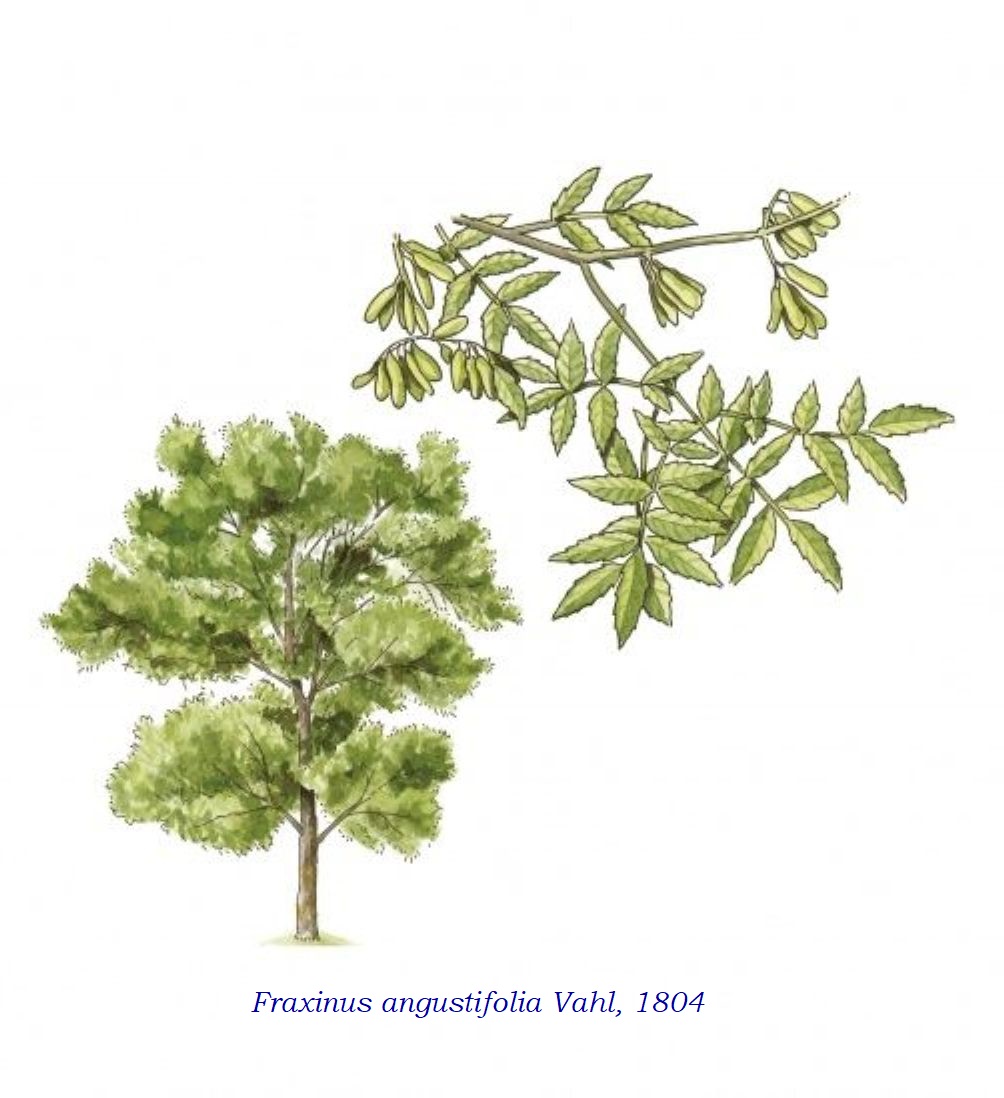 Description –
The Fraxinus angustifolia is an arboreal species that can reach 25 meters in height, with rather dense foliage, expanded more horizontally and compactly. The trunk has a light brown chapped rind in small quadrangular plates. The leaves are deciduous, opposite, petiolate, up to 20 cm long, with a blade imparipinnata with 5-13 lanceolate segments. The flowers lack perianth and develop in short racemose peaks in winter. The fruit is a samara monsperma of 24.8-38.2 x 4.2-8.8 mm, from lanceolate to oblong-lanceolate, acute, mucronata or smarginata, brownish-yellowish, with the seed of 10.1-18, 6 x 2.7-5.9 mm, fusiform, striated, brownish, placed in a cavity with an elliptical section.

Cultivation –
The Narrow-leaved ash is a heliophilous species, which grows on more acidic soils than congeners that prefers a soil pH close to neutrality or tending to the basic. It resists drought better than other ash trees, but does not like dryness in the soil. He fears competition at a young age, to which he reacts by branching and bifurcating, which can cause stability problems over the years. Its habitat in nature is that of mixed forest and thermophile frassineto. The plant propagates by seed in autumn, directly after harvesting or in spring after a cold stratification of 2-8 weeks. The final implant takes place after 2-4 years. The cultivars instead are grafted on the typical species or propagated by cuttings.

Uses and Traditions –
The Narrow-leaved ash is used in parks and gardens, in groups or isolated, and in road trees where they are exploited by the resistance to pollution and strong winds and the rapid growth to get to get good-looking tree-lined avenues relatively quickly short. In the south it is used to produce the so-called manna through the incision of the stem in the summer. The liquid that comes out of it congeals along the trunk forming cannoli or the so-called “manna in luck”, then used as mild laxative used in pediatrics and in debilitated elderly, such as eye drops and bronchial decongestant. The most showy cultivars such as Raywood are widely used as a background for mixed border or in small gardens. Given that it tolerates coastal environments it can also be used in seaside resorts, even if not directly on the coast.
Wood is less valuable than that of the larger ash tree. In Sicily, especially the Madonie (Castelbuono and Pollina) and in the territories near Palermo (Cinisi) there are still crops, or residues of these, for the production of manna, practicing incisions along the trunks in the summer months. The leaking liquid congeals along the trunk or flows up to the foot of the plant.
The chemical composition of the manna is very complex and variable, depending on the species and the cultivars from which it is extracted. The most abundant active ingredient consists of mannite or D-mannitol, a colorless, odorless, and sugary hexavalent alcohol known also as “manna sugar”. There are also various other substances such as glucose, fructose, mannotriose, mannotetrose, mineral elements, organic acids, water, and other minor components not yet well identified. The manna constitutes a pharmacologically important substance because it is used against various diseases. The manna is mainly used to combat constipation problems and as a purgative without secondary actions, both in childhood and in adulthood. In cases of poisoning, mannite produces an increase in diuresis and thus favors the removal of toxic substances from the organism through the kidneys. In hypertonic solutions it is used to remove pulmonary and cerebral edemas. The manna is also recommended for the removal of intestinal parasites. In moderate doses it stimulates the secretion of the biliary tract. Moreover, being well tolerated by diabetics, it can also be used as a food sweetener.
The varieties of F. angustifolia subsp. angustifolia produce more abundant production than those of F. ornus and have the advantage of entering production very early, from the first days of July. The manna of the southern ash, compared to that of the lute, is, however, qualitatively less valuable, has a less sweet flavor and does not highlight the white-white color typical of the manna produced by the cultivars of F. ornus but, on the contrary, has the tendency to soften, yellow or take on a more or less intense reddish color with the passing of the months.

Preparation Mode –
In addition to pharmaceutical purposes, the manna finds many uses in the kitchen, even though most of the manna is destined for processing: light and spongy, almost tasteless, manna stalactites have been a natural sweetener for a very low glucose and fructose content for centuries. , particularly recommended for people on a diet. So the manna is used a lot in the pastry in cakes, biscuits, ice cream, puddings and other confectionery specialties such as the mannetto, or the panettone with the manna created by a Madonie company. Some chefs started introducing it in their dishes, like the one used in wild pigs in pistachios, almonds and manna crust. Finally, the manna, as mentioned, is also destined for the cosmetic industry for creams, shampoos, bubble baths and the pharmaceutical industry, as a powerful cicatrizant.