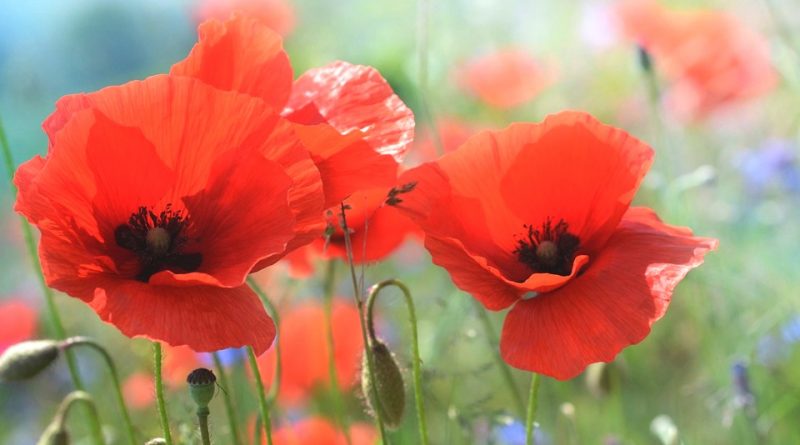 The common poppy (Papaver rhoeas L.) is an annual herbaceous species belonging to the Papaveraceae family.

Systematics –
From a systematic point of view it belongs to the Eukaryota Domain, Kingdom Plantae, Magnoliophyta Division, Magnoliopsida Class, Papaverales Order, Papaveraceae Family and then to the Papaver Genus and to the P. rhoeas Species.

Etymology –
The term Papaver is similar to the Arabic “papámbele” and to the Sanskrit “papavara” = pernicious juice, but it is more commonly believed to derive from the Latin “papaver”, which in turn came from the Celtic “papa” = baby food, highlights as, probably in the past it was combined with food, especially those of children to reconcile their sleep. The specific name rhoeas derives from the Greek word “rheo” = it will run away, it indicates the petals soon fallen, which run with each wind or from “róia” = pomegranate: for the red color.

Geographic Distribution and Habitat –
Papaver rhoeas is a typical species of the eastern Mediterranean, widespread on the Mediterranean coasts, but with extensions to the north and east (area of ​​the Vine). Its habitat is that of fields, in uncultivated dry and ruderal environments, at the edges of roads and railways; pest of crops and crops; it is between 0 and 1,900 m s.l.m. in Italy it is present in all the regions. The species, widely diffused in Italy, normally grows in fields and on the edges of roads and railways, considered by some to be a weed. 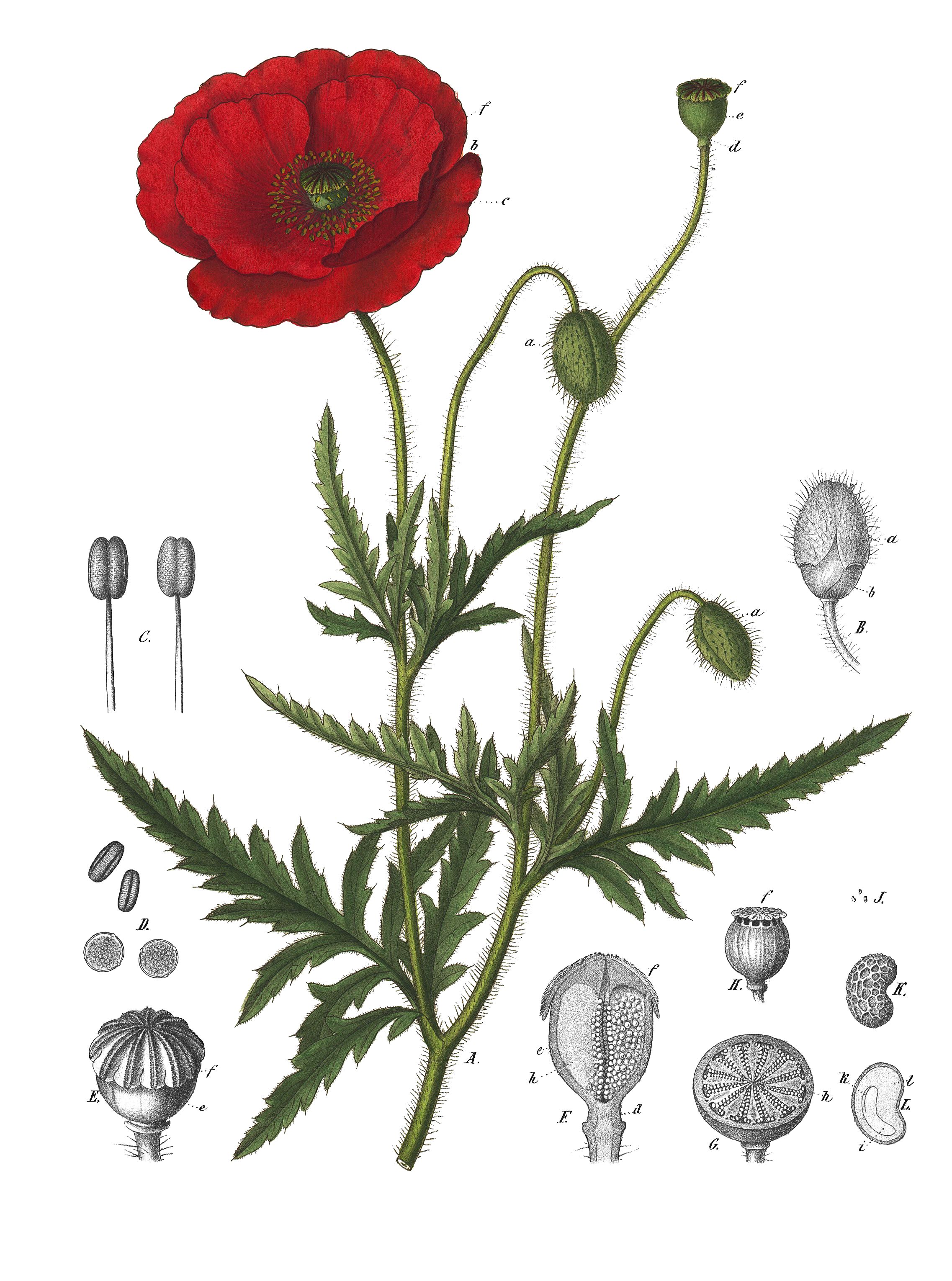 Description –
The common poppy is an annual herbaceous species with white taproot root; stems erect, ramified and bristly, covered with long hairs and licenses, which can reach heights ranging from 20 to 80 cm. The leaves are endowed with thin and soft hairs, with the basal ones with rosettes that are pennatopartite with lanceolate or elliptic segments and toothed margin, with acute apex and long petiolate base, while the cauline leaves are simpler and sessile.
The flowers grow solitary and bloom at the apex of long stalks covered with patent hairs; they are odorless, 5 ÷ 7 cm wide, with pendulous buds before flowering. They have a chalice composed of 2 bristly sepulchers, caduks and the corolla with 4 roundish petals, also very ephemeral (lasting a day or so) bright red, stained at the base of black. We find numerous stamens of blackish color. The fruits are oval glabrous capsules, surmounted by a flat stigma, containing numerous small, reniform, grayish and cross-linked seeds which, when ripe, come out of the openings placed under the stigma. Each plant produces an average of 10,000 to 20,000 seeds that remain viable in the soil for up to 40 years. The plant has a characteristic strong smell that produces a milky white and acrid juice. The antesis is in the period of April ÷ July but can also last until September ÷ October.

Cultivation –
The poppy, as mentioned, is a spontaneous and rustic plant, which is why its cultivation is not difficult at all. It is important, however, to follow certain rules to ensure that the plant grows healthy and lush. First of all, it is necessary to establish the place where to plant the seeds. The ideal space is a large garden, however, it is possible to sow almost everywhere: road margins, sidewalks, walls. The important thing is that there is, of course, the earth, that the plant is exposed to the sun and the area is well ventilated. So choose a place not too shady and make sure to plant the seeds at least 15-20 cm from each other. For the cultivation technique, the following sheet can be consulted.

Uses and Traditions –
The petals and seeds of Papaver rhoeas possess light sedative properties: the common poppy is a close relative of the opium poppy, from which the morphine is extracted. It also contains alkaloids, the main of which is rhoedin, with mildly sedative properties. It is necessary to know that the alkaloids present are mildly toxic, for this reason it is not recommended the usual intake of extracts and infusions obtained from this plant, in particular to children and the elderly.

Preparation Mode –
In Friuli the head of leaves, which grows around the root at the beginning of spring, when the plant is still underdeveloped and is far from flowering, is consumed boiled and eventually sautéed as a vegetable known under the name of “confenòns” . The taste is delicate and slightly bitter. The young plant, which has not emitted the flower stem, can be eaten raw, especially the leaves, cut thin and mixed with other vegetables, to make excellent salads, which if seasoned with salt, lemon juice and olive oil in the order, they are tasty. In Veneto this dish is called “rosoina”, “pevarel”, or “batis’ciosoe”; in truth this last name refers to the Silene, also called s-ciopèt. Also in the Salento it is consumed this plant known as “paparina”. In Romagna, it is known as “Rosole”. They are used in the kitchen, from raw, after having finely chopped and left to macerate in salt for 24/36 hours. After having squeezed them, they are used to fill the famous “Cassone” (or Cascione).
In ancient times with 4 or 5 petals per cup an infusion was prepared that was traditionally given to children before going to bed so as to induce them a better sleep; however, because of the toxicity (even if mild) of some alkaloids, its use is not recommended.