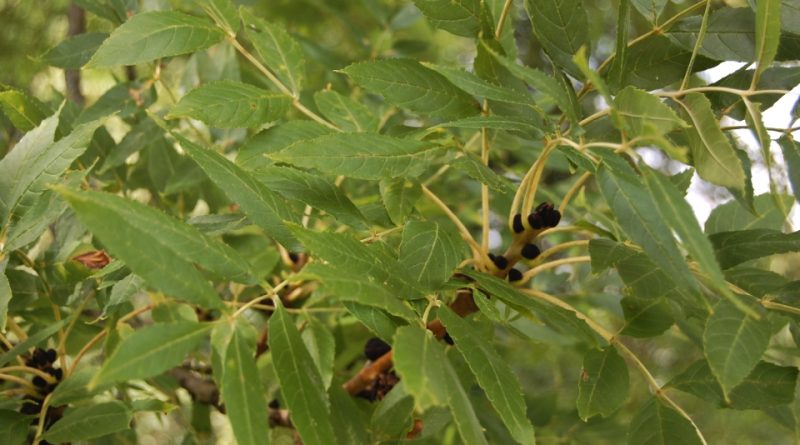 The Greater Ash or Common Ash (Fraxinus excelsior L.) is an arboreal species belonging to the Oleaceae family.

Systematics –
From the systematic point of view it belongs to the Domain Eukaryota, Kingdom Plantae, Division Magnoliophyta, Class Magnoliopsida, Order Scrophulariales, Family Oleaceae and therefore to the Genus Fraxinus and to the Specie F. excelsior.

Etymology –
The term Fraxinus is the name in classical Latin of the ash tree in Virgil and others, derived from the Greek φράξο phráxo hinging, close: tree suitable for forming hedges. The specific excelsior epithet is the comparative of high excelsus, high: species higher than the congeners.

Geographic Distribution and Habitat –
The Greater Ash is a species native to Europe and the Caucasian region. In Italy it is frequently present in the center-north, while in the south and on the islands it is replaced by the southern ash tree. 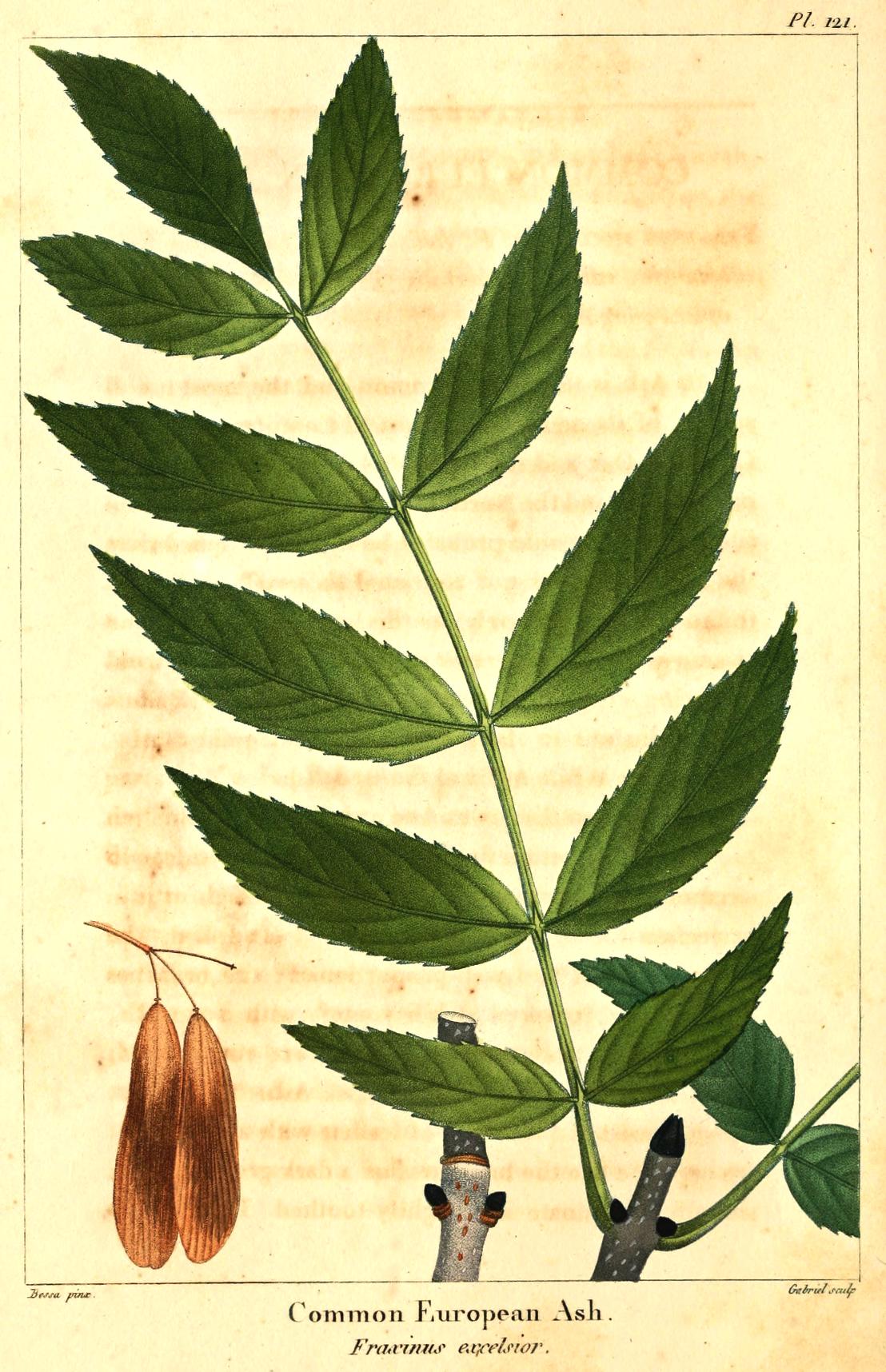 Description –
Fraxinus excelsior is an arboreal species that can even exceed 30 meters in height, with straight and slender trunk, greyish, opaque bark, initially smooth and then thickly furrowed. The leaves are deciduous, imparipinnate, formed by 7-13 elliptic-lanceolate segments. The winter gems are black. The flowers are gathered together in summits raceme formi and bloom in March April, before the leaves. The fruit is a samara, with an elongated head containing the seed and a narrow lanceolate wing.

Cultivation –
The Greater Ash is a species of particular interest for wood arboriculture; it is a lucivago, mesophile and demanding tree that requires fertile, humid soils rich in humus and deep. In forestry preparations it is governed by high forest with shifts of 70-80 years and rarely to copse.
The multiplication of the Greater Ash can be carried out by sowing or transplanting seedlings of 2-4 years; being a species very sensitive to fungal and entomological attacks, a timely fight must be foreseen. Due to its characteristics of being tolerant to the shade in the juvenile phase it can easily renew itself in the sparse oak forests and the clearings of beech-woods. It is renewed well even in abandoned former cultivations.

Uses and Traditions –
Fraxinus excelsior is a very sought-after tree due to its hard, compact and elastic wood, which is difficult to deform. In fact the wood of the greater ash is clear whitish, with very distinct rings and provided with large pots in the spring area, it is elastic and resistant, with a specific weight of 0.96 from fresh; 0.72 from seasoned and 0.66 from dry, easily workable. The wood is used for the production of plywood, flooring, furniture, rudders for pleasure boats, tool handles and parts of musical instruments. Because of its elasticity and resistance with its wood, skis were once made. It also has a high calorific value so it is a valued fuel. In ancient times, until the seventeenth century it was used, together with the dogwood, for the production of spears, javelins and spades (as well as the wheels of the wagons, since the Bronze Age, when the war chariot was a military status symbol) , so much so that the ash was often linked to pagan gods of war, fraternity of warriors or societies of a military nature.
Besides being a forest plant it is also widely used in parks and road trees.
The uses of the Major Ash are not limited only to the use of its timber; in fact, it is used for therapeutic and food purposes. Suffice it to say that the decoction of young roots harvested in spring or autumn has antidropic properties. In addition, the decoction of the powder, obtained from the bark of young branches of 3-4 years, collected at the vegetative restart and dried in the shade, has tonic, eupeptic, anti-diarrhea and febrifugal properties; for external use it is used as a poultice with astringent properties. The infusion of the leaves collected at the end of spring-early summer and dried in the sun, is used as an emollient. Also the fruits of the Frassino find an interesting use; the infusion of fruits, collected during the summer, is diuretic, laxative, sudoriferous, anti-rheumatic, with healing properties of gout for the elimination of uric acids and in the treatment of cystitis.
The decoction of manna, derived from the sugary juice, which flows from the lesions of the bark and which grows quickly in contact with the air, collected in the summer, is a purgative bland, also has pungent and anticatarral properties; it can be used as eye drops in eye congestions; pieces of manna dissolved in the mouth slowly have expectorant properties.
Another use of the larger ash is the extraction of tannins from the bark. Also you can use its leaves as fodder for livestock, especially in poor areas of pastures.

Preparation Mode –
As mentioned above, the Greater Ash has considerable uses and methods for preparing both its leaves and its lymph. The dried and crushed leaves and the fruits placed in an infusion of boiling water provide the ash tea. With the leaves fermented with water and sucrose you can prepare alcoholic beverages. Finally, the manna: a sugary substance used as a sweetener, suitable for children, the elderly and diabetics.