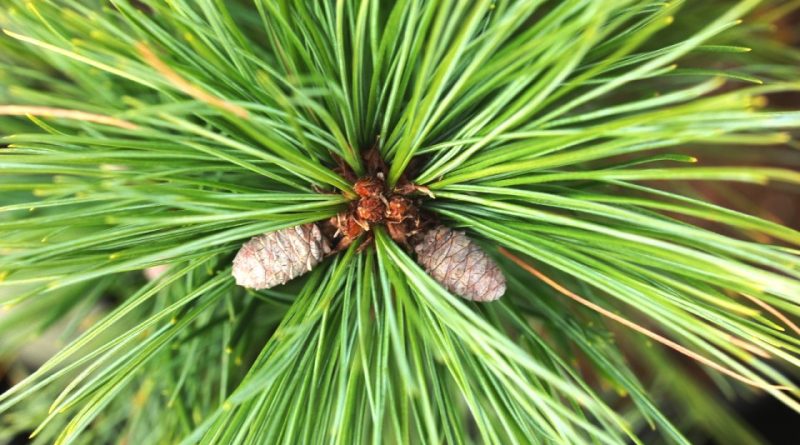 The strobe pine, also known as American white pine or Weymouth pine (Pinus strobus L.) is an arboreal species of the Pinaceae family.

Systematics –
From a systematic point of view it belongs to the Domain Eukaryota, Kingdom Plantae, Division Pinophyta, Class Pinopsida, Order Pinales, Family Pinaceae and therefore to the genus Pinus, to the subgenus Strobus and to the species P. strobus.

Etymology –
The term Pinus comes from the Latin name of the pine tree, associated with the Sanskrit pítu resinous, cited by Pliny, Virgil and others. The specific epithet strobus is the contraction of strobilus pigna: in reference to the strongly elongated strobili of this pine.

Geographic Distribution and Habitat –
The strobe pine is a large conifer native to North-East America that was introduced in Europe since the eighteenth century and was widely disseminated in the first half of the twentieth century, especially in Italy, in order to provide raw material to industry some paper.
The area of ​​origin of a large part of North-East North America was characterized by strobing pine forests which, following intensive deforestation in the 18th and 19th centuries; today only a small part of the original trees have remained. Currently the strobe pine is present to the north from the Newfoundland Peninsula to Minnesota, going south along the Appalachian chain to the northern part of Georgia. After its introduction in Europe it now grows spontaneously in some parts of Europe, such as Poland, the Czech Republic and also in Northern Italy. 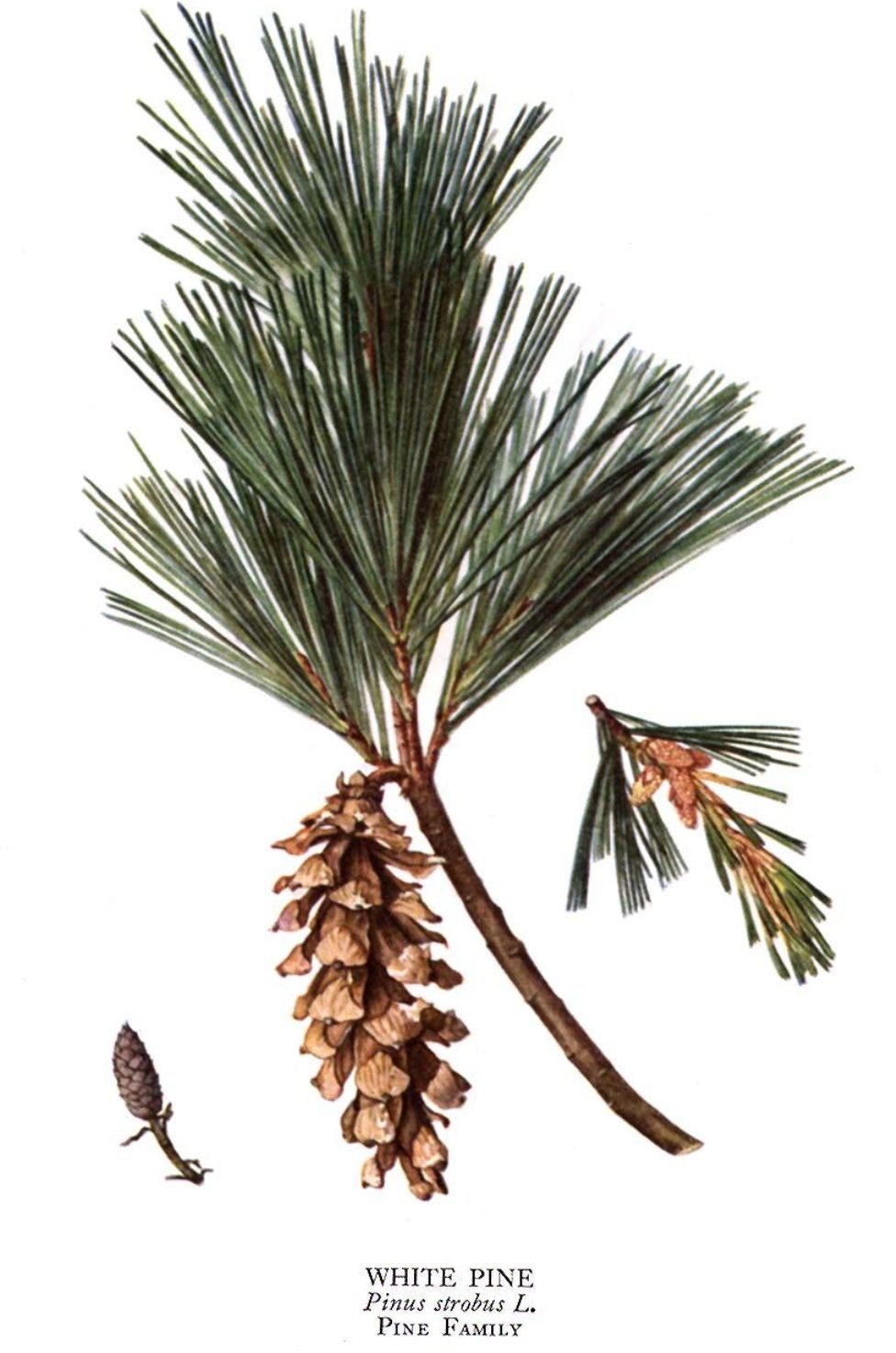 Description –
The Pinus strobus is a tree that can reach 40 meters in height and has a straight and columnar bearing, with rather light, slightly green glaucous foliage. The rind is dark gray, first smooth then cracked in fairly regular plates. The leaves are needles gathered in groups of five, flexible and 8-12 cm long. The male cones are yellow, oblong, in sleeves at the base of the twigs; the female cones are cylindrical, narrow and elongated, with a peduncle and very resinous; these mature when they reach 20 cm and can remain closed for a long time on the plant before freeing the seeds; the scales are leathery but flexible.

Cultivation –
The strobe pine prefers well drained soils and cool and humid climates, at neutral or acid pH, in full sun; it also grows sometimes in swampy areas and rocky plateaus and does not tolerate atmospheric pollution.
Propagation occurs by seed either in October or late winter, after cold stratification at 1-5 ° C for about 60 days. The seedbed can be shaded at the beginning, but the full sun must be guaranteed later. It is advisable to repair the young seedlings throughout the first, and in some cases also the second winter and place them in the next spring. Even if the Pino strobe bears well the transplants it is not advisable to move plants of a certain height in order not to affect the wind resistance of the tree. Alternatively, it is possible to proceed by vegetative propagation by taking cuttings from the twigs in the late winter of specimens of 2-6 years of life and making them root, or grafting marzes taken from adult specimens on young specimens.
To help in the growth of young seedlings we recommend mulching to avoid weed competition and a plant that guarantees the light it needs. Thanks to its characteristics, the Pino Strobe can be used as an isolated specimen or in groups not too dense, in borders as a protagonist or on the bottom depending on its height, in collections of conifers, or in capable containers in the case of dwarf varieties. It should never be associated with plants of the genus Ribes because it is very sensitive to the attacks of a rust conveyed by these plants.

Uses and Traditions –
Pinus strobus is a species of forest interest that adapts well to poor soils. The wood is light and non-deformable and is used for fixtures, floors, matches and in the paper industry, also being undeformable was used, especially in the past, to manufacture naval trees, but today is used mainly for floors and fixtures, as well as in paper industry.
For naval purposes, large quantities of lumber were sold to the Royal Navy. In the colonial era of the United States it was widely used for the construction, furnishing and flooring of houses. Later it was gradually replaced by more prized species. However the strobe pine is still heavily cultivated in forestry in several areas of the United States.
Interesting is the vitamin C content of the needles of this species which is five times higher, by weight, to lemons; for this reason they are then used to prepare herbal teas.
As for the resin, however, this is used for waterproofing vessels and is also used by the chemical industry for the production of turpentine.
The strobe pine has many varieties that also differ in small features; among these we remember:
– “Compacta” and “Nana”, generic names that bring together the nano and compact varieties;
– “Blue shag”, compact and rounded variety with green needles with blue hues;
– “Contorta” variety with the trunk and twisted branches, but with pyramidal habitus anyway;
– “Fastigiata” columnar variety, three times higher than usually wide, with bluish and tender needles;
– “Glauca”, a name that unites many single varieties all with needles with a bluish tinge;
– “Hillside winter gold” varieties with needles that from light green become golden yellow in autumn and winter, ideal for creating a contrast of color with variety of blue-leafed conifers;
– “Aurea”, with golden foliage throughout the year, richer in autumn;
– “Pendula”, a very polymorphic variety, however characterized by weeping and twisted branches, which can be suitably guided to obtain a certain type of final effect;
– “Sea urchin”, as the name implies, a dwarf and globose shape reminiscent of a sea urchin, with slow growth and blue-tinged needles;
– “Uconn”, of intermediate dimensions, reaches about 6 meters in height and has a pyramidal shape, so it is ideal in small spaces.

Preparation Mode –
Due to the high vitamin C content of the needles, teas and decoctions can be prepared; the latter, differently from the infusion (or tea of ​​pine needles) allows to extract a greater quantity of essential oils which are the mediators of the medicinal principles which are expressed in the expectorant, decongestant and antiseptic properties of this natural product available in the woods.