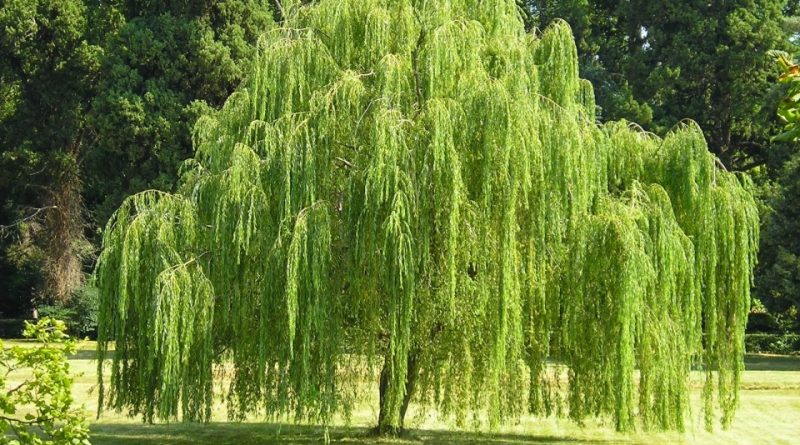 The weeping willow (Salix babylonica L.) is an arboreal species belonging to the Salicaceae family.

Systematics –
From the systematic point of view it belongs to the Domain Eukaryota, Kingdom Plantae, Subarign Tracheobionta, Superdivisione Spermatophyta, Division Magnoliophyta, Class Magnoliopsida, Order Salicales, Family Salicaceae and then to the Genus Salix and to the Species S. babilonica.

Etymology –
The term Salix comes from the classical Latin name of willow, perhaps associated with the Sanskrit saras acqua. The specific Babylonian epithet derives from Babylonian, Babylonian: the linneian term refers to Psalm 137 of the Vulgate Clementine, but the weeping willow was introduced by China in Europe and the Middle East, along the Silk Road, only in the Middle Ages.

Geographic Distribution and Habitat –
The natural presence of Salix babylonica is limited to the temperate regions of China. A very similar species, the Salix matsudana, also of temperate China, is considered by many authors as a variety or a subspecies of Salix babylonica. The weeping willow has already spread to ancient times, first in the territories of China and then, following the silk road, to the west.

Description –
Salix babylonica is a deciduous tree species that can reach a height of 10-15 m and which, especially in the areas of origin, can reach 25 m .; it has pendulous and thin branches, a characteristic very present in the ornamental varieties that make the plant assume a downward bearing, hence the term weeping. It has spiral-shaped leaves, light green in color, narrow and long (0.5-2 x 4-16 cm), pointed, with a finely serrated edge and which in autumn, before falling, become golden yellow. The flowers are gathered in catkins, which appear in the very first spring. Being a dioecious plant the male and female catkins appear on distinct trees. The fruits are capsules containing many small seeds, each one provided with a tuft of silky white hairs.

Cultivation –
The cultivation of Salix babylonica begins in the humid nursery for the production of woody cuttings with a length that reaches at least thirty centimeters. Then, after a year, the young specimens are planted.
The planting is the operation that has the greatest importance for the preparation of a garden. In fact, once placed at home, the weeping willow for its size will affect the rest of the arrangement of the space, creating areas of shade, more discoveries, areas more or less crossed by light: it is absolutely important, therefore, to have well clear the idea of ​​creating the garden as a whole. His preference definitely goes to moist soils, which are very fertile and rich in organic matter. The privileged exposure to the weeping willow is sunny or half-shade. Due to its rusticity it has a remarkable resistance to cold. Remember that the plant should never be pruned, just to maintain its peculiarity. For the cultivation technique, the following sheet can be consulted.

Uses and Traditions –
Salix babylonica is one of the most used willows for ornamental purposes. These are plants that are particularly common in the moors or in areas with a high humidity level. Like other willows, also the weeping willow is often used also for the reforestation of natural areas that have been subjected and degradation processes and for the characteristics of this plant should be chosen very wet and marshy areas. The use of weeping willow is very suitable for gardens where drainage is very difficult due to the soil or soil morphology. This plant is also often used as a windbreak or for the formation of natural barriers, aimed at protecting other plants, by virtue of their strong structure.
From the weeping willow can also be obtained natural rooting hormones very suitable for rooting cuttings of other herbaceous or woody plants.

Preparation Mode –
In addition to its use for ornamental and forestry purposes and for the extraction of rooting hormones, Salix babilonica has no other particular uses.