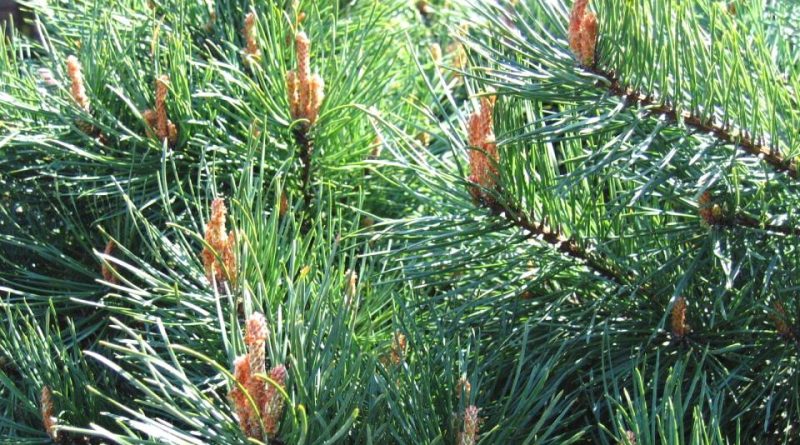 Systematics –
From a systematic point of view it belongs to the Domain Eukaryota, Kingdom Plantae, Division Pinophyta, Class Pinopsida, Order Pinales, Family Pinaceae and therefore to the genus Pinus and to the species P. sylvestris.

Etymology –
The term Pinus derives from the Latin name of the pine, connected with the Sanskrit pítu resinous, cited by Pliny, Virgil and others. The specific epithet sylvestris refers to sylva selva, wood (Latin form less correct for silva), that is of a plant that grows in the woods, in the wild places.

Geographic Distribution and Habitat –
Scots pine is a typically Eurasian species, with diffusion from Scotland to Eastern Siberia, with an area that is the largest among all the species of Pinus. In Italy it is widespread in all the continental valleys, from the Val di Susa to the Tarvisio, and it also presents relics populations on the northern Apennines. In Italy it grows mainly at altitudes between 400 and 1400 meters (even if it can go up to 1800-1900 m) and forms both pure and mixed woods, usually with spruce or white fir. In the plains form pure or mixed woods with birch, aspen or English oak. 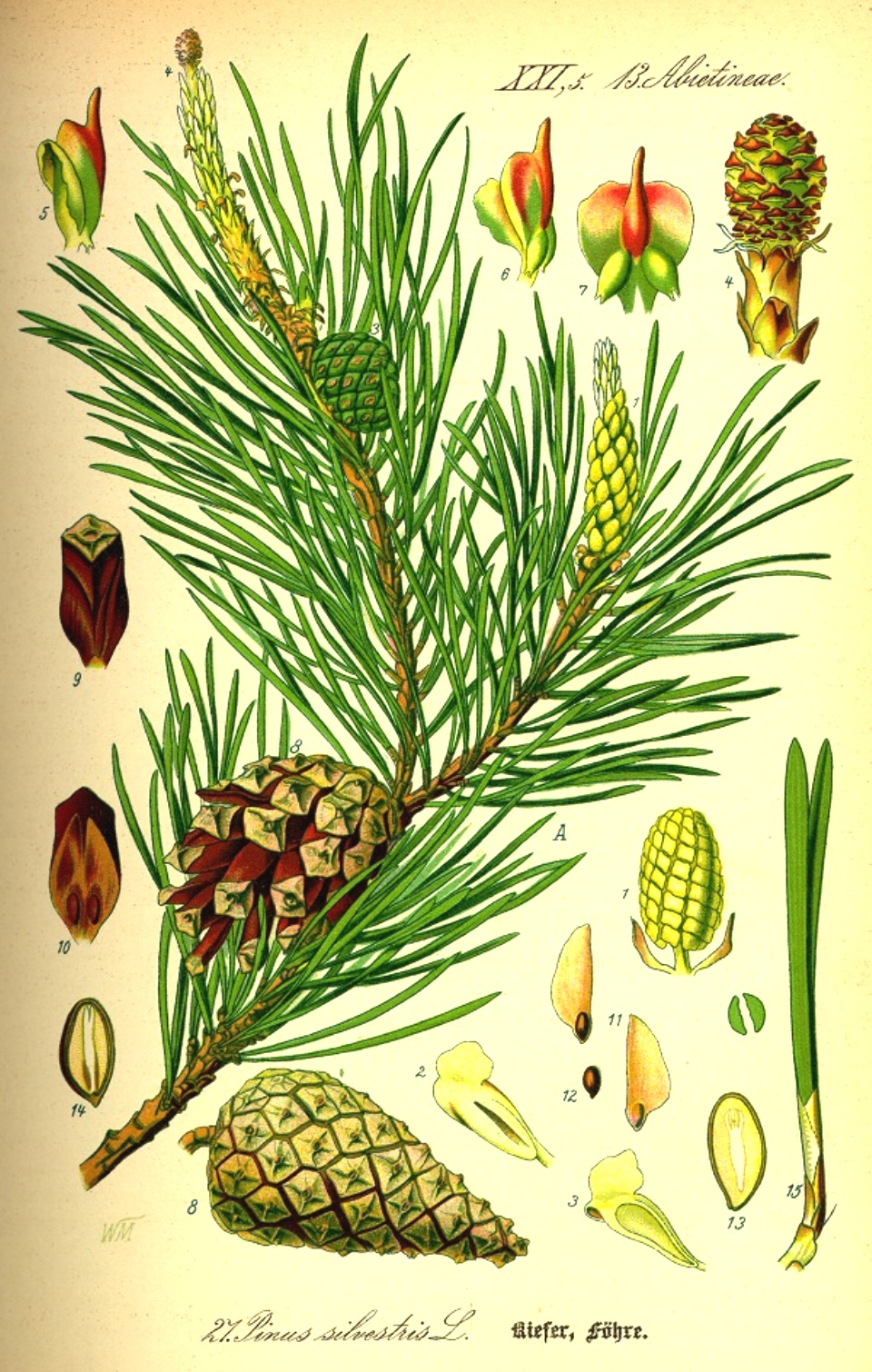 Description –
The Pinus sylvestris is an arboreal species that can reach up to 30 m in height, with light-colored, green-gray foliage, first conical and then pyramidal-expanded or almost umbrella-like. The trunk is straight and has, in the upper part, like the branches, a smooth tawny-cinnamon rind, which peels into thin papery sheets, while towards the base it becomes thick, wrinkled, gray-brownish and furrowed. The leaves are pairs of needles, up to 5 cm long and up to 2 mm wide, stiff and pungent, with a glaucescent green color and are enveloped in a precociously deciduous sheath. The male cones are yellow, small, which are thickened at the base of the shoots; the female cones are generally isolated and have no peduncle. These are globose and greenish, then they become strictly conical, sometimes they are a bit ‘curved, with light brown color and long not more than 4 cm.
This plant is characterized by tap roots with lateral roots that deepen and move away horizontally that allow it to penetrate deep into aquifers.

Cultivation –
Scots pine plays an important role in the forestry and silvicultural sector. It is an undemanding colonizing plant with regard to the land and the need for water and is an adaptable species that prefers calcareous soils including clayey soils, but which grows very well both in volcanic soils and in acids in general. It resists well both in the cold and in the dry and is distinctly a heliophilous plant. The plant is propagated by seed immediately after harvesting or in late winter, in individual jars to prevent repotting. The containers must be exposed to light because the brightness is essential for germination. The plant can take place within a couple of years, taking care to provide a mulch to avoid the competition of young plants of Pinus sylvestris with weeds and to protect the plant from the cold for at least the first two winters. Transplants should be avoided as much as possible, especially for plants taller than 90 cm, under penalty of stunting and less wind resistance.

Uses and Traditions –
Scots pine is also frequently used in parks and gardens. It is a resiniferous species that was once cultivated for the production of natural turpentine; today it is almost exclusively forestry. As for the quality of the wood only the sylvan pine of northern Europe (Swedish pine) provides a fine wood.
As for the silvicultural aspects, it is a widespread species with extensive reforestation, both in Central Europe and in the Alps; it is useful for enhancing low fertile agricultural land. The government is made with reduced cuts of small dimensions that favor natural renewal.
As for the variability of this species, despite the huge range, the morphological characteristics remain rather uniform. However, more than 140 subspecies, varieties and botanical forms have been described. In fact, botanists distinguish three varieties that are weakly distinguishable at the morphological level:
– Pinus sylvestris var. sylvestris; present in Europe and in Siberia up to the extreme east of the Asian continent;
– Pinus sylvestris var. hamata Steven; present in Ukraine, the Caucasus and Turkey;
– Pinus sylvestris var. Mongolian Litv .; present in the north of China and around Lake Baikal in Siberia.
Sylvan pine needles are used in folk medicine as such to obtain foments. Currently, from them is obtained, by distillation, an essential oil, rich in monoterpenes, which has balsamic action, sedative of cough and anti-inflammatory. For topical use it has anti-inflammatory and decontracting action. Sometimes essential pine oil can cause irritation on the mucous membranes or on the skin, especially when used with aerosols.
This plant has the following properties:
– Antiseptic for the uterine, respiratory and liver ways;
– Expectorant-fluidifying of bronchial secretions;
– Antirheumatic.
Properties that are useful especially in the case of colds, bronchitis, tracheitis, pneumonia, asthma; influence; chronic cystitis, prostatitis, leucorrhoea and cholecystitis.
The chemical constituents of Sylvan pine, on the other hand, are:
– Oleoresin, from which the essence of turpentine is obtained by distillation;
– Essential oil, rich in monoterpenes;
– Coniferoside;
– bitter substances.
The wood of the Scotch Pine is instead used for building and naval constructions, windows, musical instruments, furniture, packaging, paper pulp, hydraulic works.

Preparation Mode –
The buds of Scotch Pine can be used to make decoctions, useful for disinfecting the skin, and as a deodorant for the environment, while the leaves of the pine have a purifying action, useful for the lungs, kidneys and bladder.
The essential oil is also used in the field of natural cosmetics to produce soaps and detergents that have purifying, deodorising, stimulating and energizing properties against tiredness.
In addition to the needles, also from the bark is obtained an essential oil of inferior quality that is used to make products of natural cosmetics for the bathroom. In case of cough, sinusitis and cold, it is possible to make an infusion with a cup of warm water and a spoonful of needles. After 10 minutes of infusion it is possible to filter, add 20 drops of pine glyceric macerate and consume up to 2 cups a day.
Against rheumatism, instead, it is possible to massage a mixture of sweet almond oil and 1-2 drops of pine essential oil on the affected parts.
However, it should be remembered that the essential oil of Scots pine can cause irritation to the skin and mucous membranes, especially if used for aerosols; moreover it is better to avoid its use in case of hypersensitivity to one or more components.