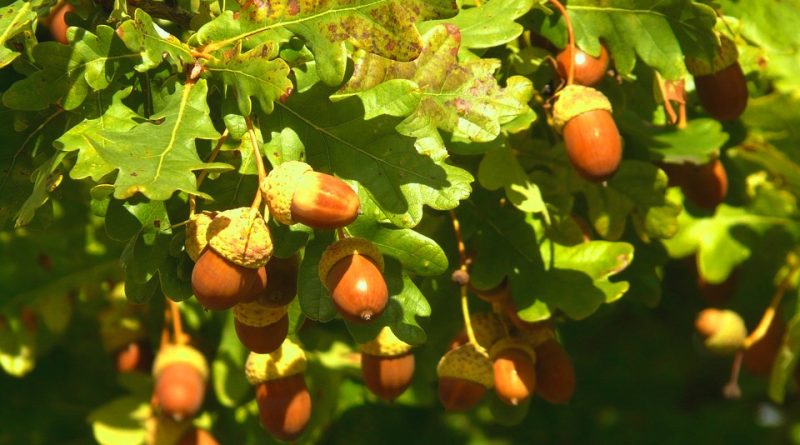 Systematics –
From the systematic point of view it belongs to the Eukaryota Domain, Kingdom Plantae, Magnoliophyta Division, Magnoliopsida Class, Fagales Order, Fagaceae Family and therefore to the Quercus Genus and to the Q. Robur Species.

Etymology –
The term of the genus Quercus deirva from quercus, Latin name of the oak, plant sacred to Jupiter. The specific epithet robur is the Latin term originally referring to particularly hard woods, robust or gnarled like that of oaks, then passed to mean strength, vigor, robustness (Latin robur, roboris).

Geographic Distribution and Habitat –
Quercus robur is the most widespread oak in Europe, with a rather vast range. Its area of ​​origin is located between Europe and the Caucasus. its habitat is in temperate-cold climates, typical of alluvial plains and low-lying valley bottoms (it does not go beyond 800-1,000 meters). In Italy it is not present on the islands.
In Italy in ancient times it was widespread in the Po Valley where it formed vast forests in association with the Turkey oak (Quercus cerris) and the white hornbeam (Carpinus betulus). Today there are only wrecks of these lowland forests, which testify to what was to be the ecological system before the massive deforestation operated by man in the various eras.
Today it is still widespread with a certain frequency in the countryside but often as an isolated tree, indicating ancient territorial boundaries. The English oak is often present in city parks and large gardens. 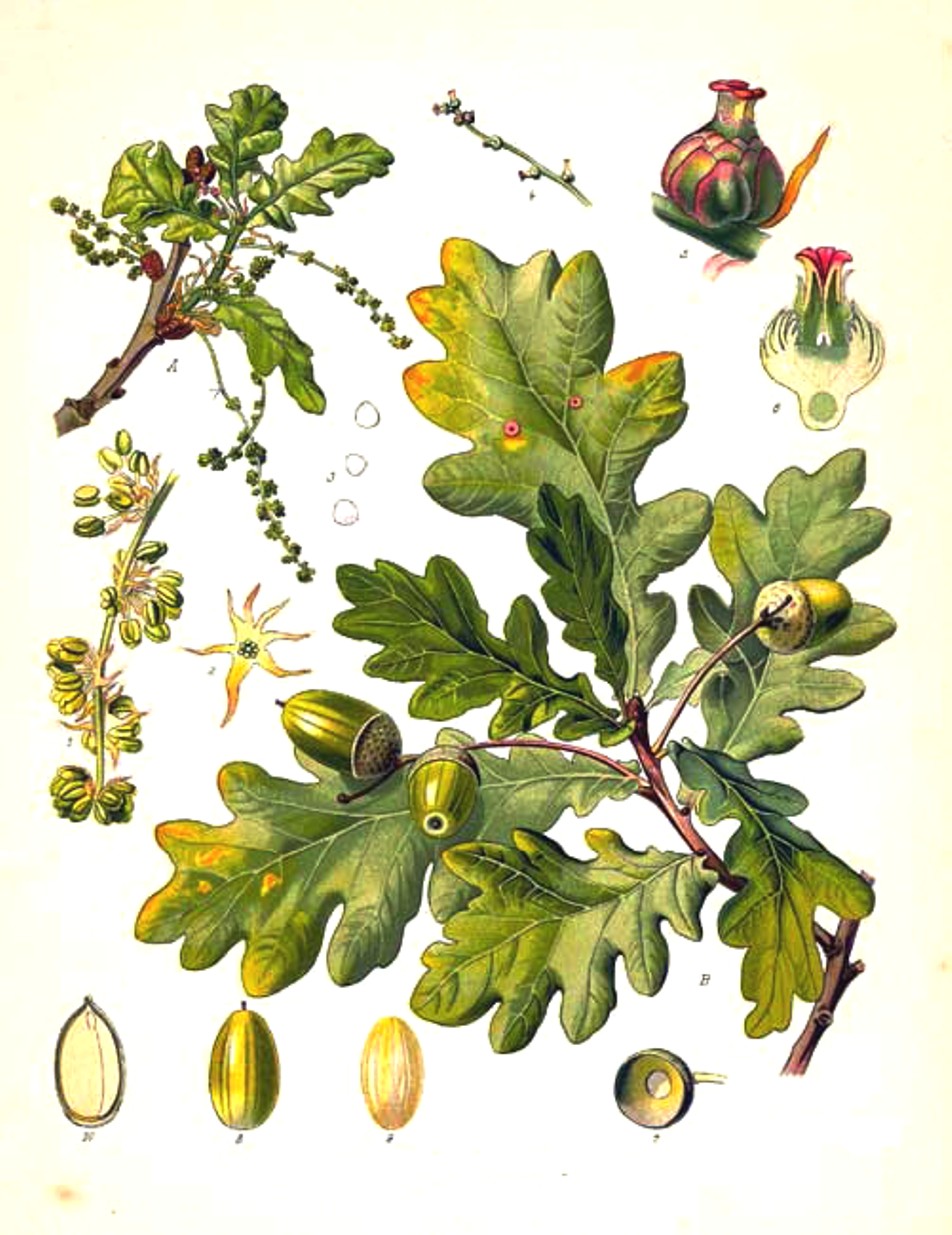 Description –
The Quercus robur is a majestic arboreal species that can reach 50 meters in height, with very wide foliage and branches that, with the passage of time, become more and more massive, gnarled and twisted. It has a straight trunk that over time tends to widen to base and bark, at the beginning smooth and opaque, which soon becomes wrinkled, brownish and cracked. The leaves are deciduous, glabrous and slightly glaucous, up to 12 cm long, with almost absent petiole hidden by the base of the lamina which extends into two orecchiette. The male flowers are yellowish while the female ones are found at 1-3 on long peduncles. From fertilization, oblong acorns are formed, brown at maturity (in a year) which are covered by a dome covered with appliqueed rhomboid squamettes. It is easily distinguished from Rovere and Roverella because the petiole is almost absent and the acorns are supported by a long peduncle.

Cultivation –
The cultivation of English oak is carried out by direct sowing of acorns within two months of harvesting. Unlike the other oaks, the acorn emits the radicle just buried, while the aerial part of the plant grows at the beginning of spring. For the planting of young plants it is necessary to wait for them to form a good structure and this happens after two or three years. It is a plant that can adapt to different types of soil, although it prefers deep, fresh, clayey, acid and well-watered ones. Being an arboreal species characterized by considerable size and slow growth this limits its use as an ornamental plant.

Uses and Traditions –
The English oak represents, also symbolically, the typical species of the genus Quercus. This plant is an important habitat for other living beings, especially animals; in fact, many insects live on the leaves, on the buds and on the acorns that are an important source of food for several small mammals and some birds including the jay (Garrulus glandarius).
Quercus robur is a plant that is as robust as it is long-lived; some living specimens seem to exceed 1000 years of life. From the forest point of view it is one of the most precious essences. It has a hard and resistant wood and its fruits are very appreciated by pigs and wild boar.
The English oak is cultivated for reforestation and for the precious timber which is its most important product. The wood of this oak, also known as “Slavonian oak”, is light brown, resistant, durable, with thick fibers and clear differentiation between sapwood and heartwood; it is heavy (specific weight 0.75 kg / dm3). This wood is used to build fine furniture, parquet and barrels for the aging of liqueurs (Cognac), as well as for the production of coal and the direct use as fuel. In ancient times, the English oak was widely used in shipbuilding, especially in the United Kingdom, which is one of the reasons for the extensive deforestation. It is also used as a symbiotic plant for the cultivation of white truffles.
The oak, very concretely, will represent for a couple of millennia the main source of energy and food (for the acorns) of human society, and the raw material indispensable for any type of construction, starting from ships that, in many cases, arrived to use wood of three or four thousand oaks. Victim of his own generosity, the queen of the forest could not, it seems, become an increasingly rare presence, both in the agricultural landscape and in the city where the only oak used seems to be the evergreen holm oak. The decline, however, was not caused only by the super exploitation, by the ecological competition with man, that from the environment most loved by oaks (the hot slope of the hill slopes) we find arable fields and building land, or from the note slowness of a tree that pushes the silversmiths to prefer the conifers, faster and more productive. On the sunset of an era there is also something that has to do with culture, religion, the idea of ​​space and time.
The beginning of the end for the tree sacred to Jupiter and Thor, coincides with the advent of Christianity, a religion that will deprive the oak and other venerable trees of their pagan soul and therefore of respect, combined with fear, which protected its presence.

Preparation Mode –
Although in the past oak has represented for man a source of food, especially in times of famine, today its food use has almost disappeared except for the feeding of animals.