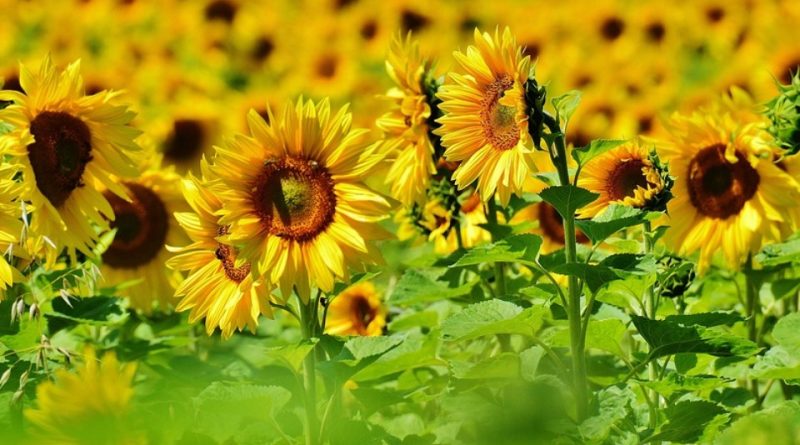 The common sunflower (Helianthus annuus L., 1753) is an annual herbaceous species belonging to the Asteraceae family.

Systematics –
From the systematic point of view it belongs to the Eukaryota Domain, Kingdom Plantae, Magnoliophyta Division, Magnoliopsida Class, Asterales Order, Asteraceae Family, Subfamily Asteroideae, Heliantheae Tribe, Helianthinae Subtribe and then to the Genus Helianthus and to the H. annuus Species.

Etymology –
The term Helianthus comes from the Greek ἥλιος hélios, sun and from ἄνθος antrum, flower: therefore literally flower of the sun. The specific epithet annuus derives from annual, with reference to the duration of its vegetative cycle. The ordinary term Girasole is related to the elevated heliotropism of this plant, that is, by following the movement of sunlight during the day.

Geographic Distribution and Habitat –
Helianthus annuus is a species originating in an area between South America and North America.
Species grown all over the world. In Italy it is widespread in cultivations, especially in the central north, and present in the spontaneous state as a naturalized exotic plant.
Its typical habitat is areas near vegetable gardens and abandoned areas, ruderal environments, rural roads and slopes, in both calcareous and siliceous soils with neutral pH and high nutritional values ​​of the soil that must be moderately humid. It is found up to 1500 m s.l.m .; they frequent the vegetational plans: from the sea level up to the hilly and partly mountainous ones. 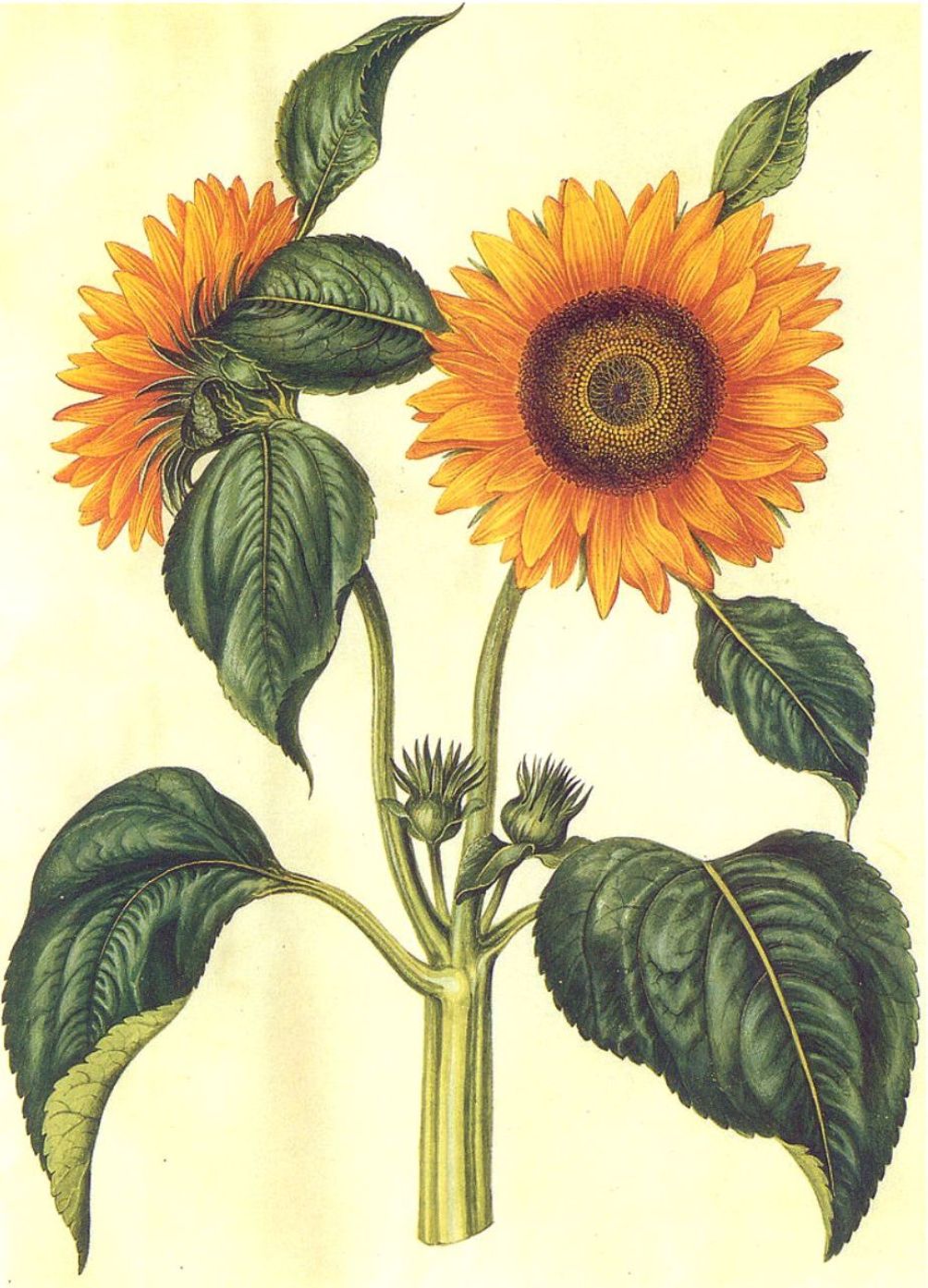 Description –
Il Girasole is a large herbaceous species with an annual cycle of vegetation. It has a long taping root on which the lateral roots are inserted. The stem can reach up to 2 meters. The culm is erect and only at maturity it curves in the terminal part for increasing the weight of the inflorescence. The leaves, which are rough on both sides, are inserted directly on the stem and with a long petiole. They are opposed up to the 2nd-3rd pair, while later they are alternate. The culm ends with an inflorescence or calatide, whose dimensions vary from 10 to 40 cm in diameter. The inflorescence is characterized, externally, by a crown of sterile flowers, with large yellow ligule, within which are inserted all the others, smaller, fertile and hermaphrodite, with a total number of flowers ranging from 500 to 3,000 up to a maximum of 8,000.
The flowers hatch in a scalar and centripetal way. From fertilization it forms an indehiscent dry fruit, called achene, of variable size and shape with an oil content of 40 to 50% of the weight of the seed.
The Helianthus annuus is characterized by an accentuated heliotropism, ie the fact of following the movement of sunlight; the movement originates from the driving cells of the pulvinus, a flexible segment of the stem that is right under the bud itself, a characteristic that ceases when flowering occurs, due to the stiffening of the stem, so that from now on most of the flowers remains facing south-east.

Cultivation –
The Girasole, from an agronomic point of view, is a renewal plant and is an excellent wheat preparer. Its cycle is spring-summer very short and leaves the ground in good condition of fertility thanks to the abundant crop residues. Once developed, it has a remarkable ability to suffocate weeds. In the rotation technique the sunflower must follow to itself no earlier than 6-7 years. In the center-south, due to the particular brevity of the cycle, it is possible to use sunflower as an irrigation interlayer. For the cultivation technique, the following sheet can be consulted.

Uses and Traditions –
The term sunflower was already known in the Mediterranean long before the “Helianthus annuus” was imported in the sixteenth century. from the Americas. The name “Helianthus” referred to plants with a heliotropic movement.
The sunflower has been cultivated for the first time around the year 1000 BC. from the Indians of northern Mexico. For the Incas the sunflower was the image plant of the sun god, identified both in the seeds of the flower and with reproductions in gold.
The Mayans cooked the grains to make an aphrodisiac drink, this virtue remained even after arriving in Europe, and the naturalist Loniarus advised to fry the fresh sunflower petals and then to eat them with pepper and salt, in order to “rejuvenate before facing conjugal duties “.
This property was later confirmed by scientific studies showing that sunflower seeds contained chlorogenic acid, unsaturated fatty acids and vitamin E; elements that would promote fertility and fight impotence.
Sunflower seeds are characterized by their content of fatty acids considered essential, among which we remember folic acid, particularly recommended during pregnancy for the proper development of the baby, and linoleic acid, used by our body for the formation of omega 3 fatty acids, considered very useful for the protection of the heart.
These contain vitamins of the B group, and vitamin E, which is able to perform an antioxidant function and protect the cells of our body from aging. Among the mineral salts contained in sunflower seeds, we find iron and zinc, as well as phosphorus. They also have an interesting content of magnesium and potassium.
Sunflower seeds are indicated to ensure a good functioning of the intestine and for the prevention of respiratory diseases. The vitamin E contained in them has been identified as an element able to protect the lungs from oxidative stress. The consumption of sunflower seeds is considered useful for cancer prevention, with particular reference to the present selenium.
Also important is the magnesium and copper content which makes sunflower seeds a beneficial food for bone health. Vitamin E would also help alleviate the pains caused by arthritis. It is still thanks to the magnesium in them that the sunflower seeds are considered a beneficial food because they are precious to restore a state of calm, because they relax the nerves, helping to avoid stress and headaches.

Preparation Mode –
The sunflower is used for gastronomic purposes especially for the extraction from its oil seeds; the direct use of the seeds and flowers of the plant is made for the preparation of different types of salads.